Isolation Scanner service's combination of independent measurements fully characterizes the annular environment, differentiating low-density solids from liquids to distinguish lightweight and contaminated cements from liquids. Its azimuthal coverage provides an answer around the entire circumference of the casing, pinpointing any channels in the cement and confirming the effectiveness of the annular barrier for zonal isolation. 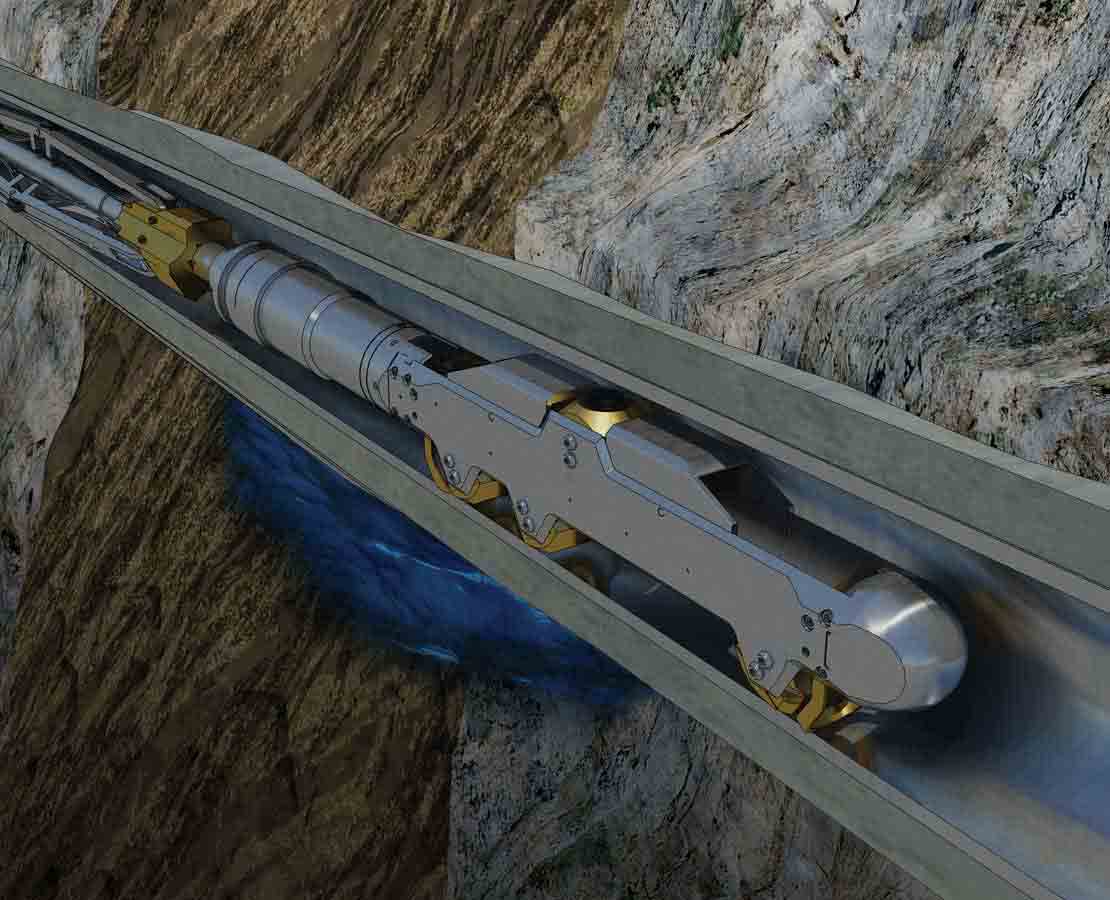 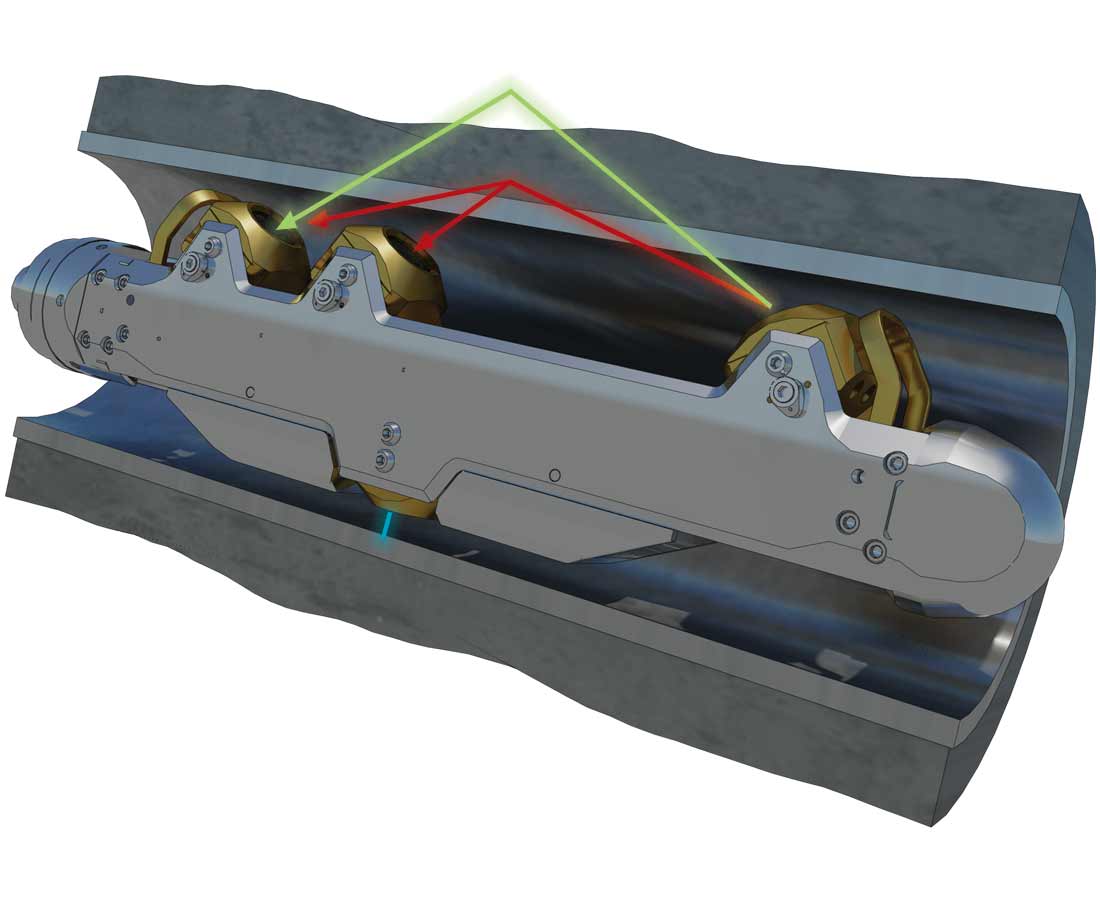 Processing provides a robust interpreted image of the material immediately behind the casing. The independent inputs cement impedance and flexural wave attenuation from Isolation Scanner service are invertibly related to the properties of both the fluid inside the casing and the outside medium. This means that fluid effects are accounted for, eliminating the need for logging specific fluid-property measurements. The output is a solid-liquid-gas (SLG) map that displays the most likely material behind the casing.

Isolation Scanner service also identifies corrosion or drilling-induced wear through measurement of the inside diameter and thickness of the casing.

The flexural wave measurement produces entirely new information from the third-interface echoes (TIEs) between the annulus and the borehole or outer casing. The TIEs image the borehole shape, define the position of the casing within the borehole or outer casing, and image the outer string to reveal corrosion and damage. This previously unavailable geometrical information for the cased hole environment helps in assessing casing and cementing techniques, choosing cut points on casing retrieval jobs, and providing context for other evaluation services run through casing.

Full characterization of the cased hole environment and casing condition

Isolation Scanner cement evaluation service integrates the classic pulse-echo technique with flexural wave propagation to enable accurate diagnosing of zonal isolation, even where the cement has a low acoustic impedance or is contaminated with mud. Conventional cement bond logs require a significant contrast in acoustic impedance between the cement and the displaced fluid to unambiguously identify solids.

The flexural wave technique induces a flexural wave in the casing with a transmitter and measures the resulting signals at two receivers. The attenuation calculated between the two receivers provides an independent response that is paired with the pulse-echo measurement and compared with a laboratory-measured database to produce an image of the material immediately behind the casing. By radially measuring beyond the boundaries of traditional cement evaluation, Isolation Scanner service confirms zonal isolation, pinpoints any channels in the cement, and ensures confident squeeze or no-squeeze decisions. 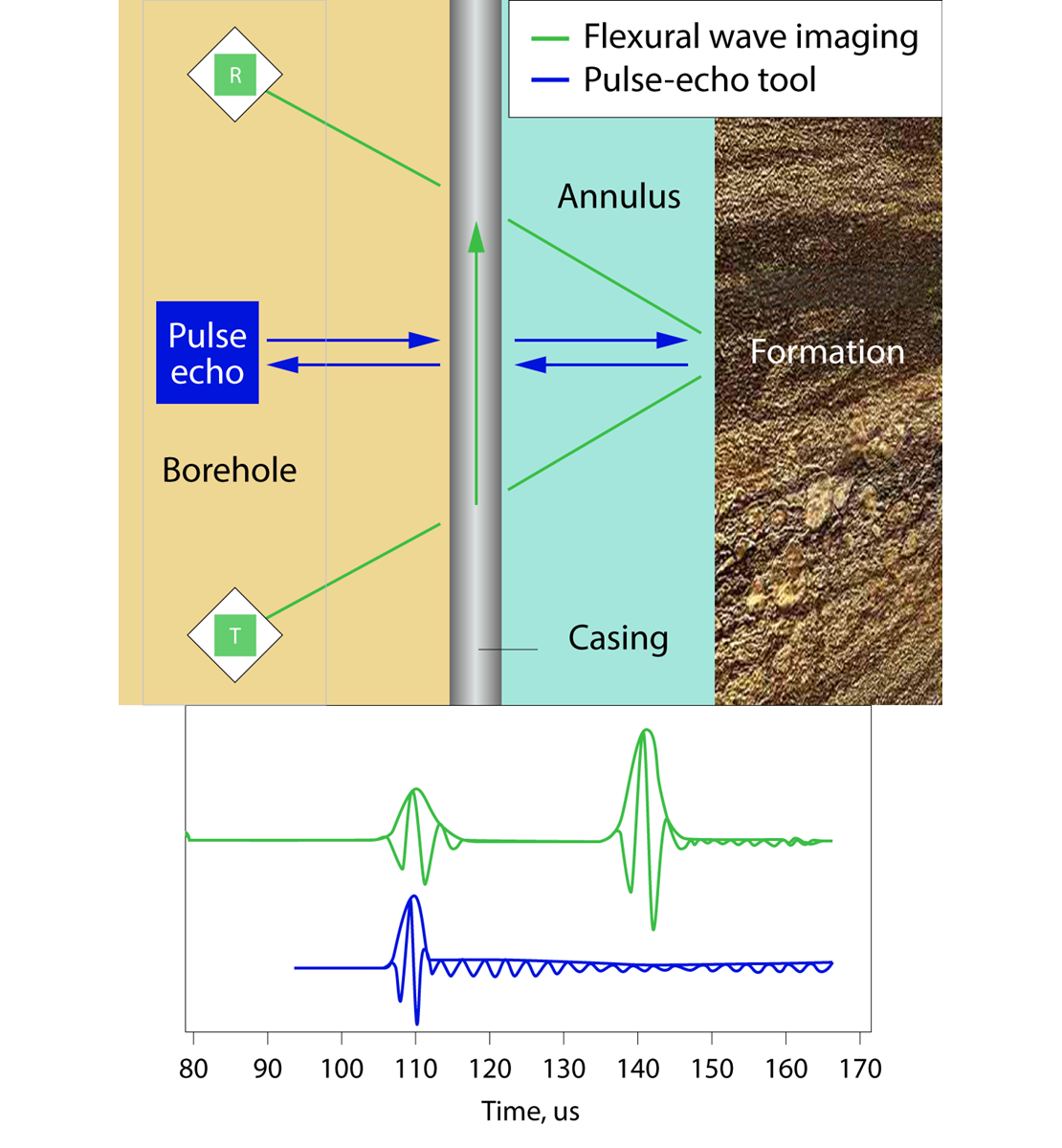 Flexural wave attenuation of a well-bonded cement is plotted as a function of acoustic impedance for various materials. The critical impedance value corresponds to the critical compressional wave speed of the cement.

The signals following the casing arrivals arising from the interface between the annulus and the borehole or outer casing can be detected and measured. These third-interface echoes (TIEs) provide the position of the casing within the borehole, and if the borehole size is know, the velocity of the annulus material can be determined. This additional information is available only through Isolation Scanner service flexural measurements.

The rate of energy radiation into the annulus depends on the acoustic properties of the annular fill. The attenuation is estimated by capturing the reflected signals at two Isolation Scanner service receivers, which are a known distance apart, and calculating the decay rate of the received signal. Attenuation is expressed in decibel per centimeter (dB/cm).

How we're supporting the energy transition