The survey was designed after carefully mapping existing data, which indicated similar play types and petroleum systems to those found in the greater Bjørnøya Basin area:

The survey covers an area designed to image these plays and terraces as well as Bjornoya and Leirdjupetbounding fault complexes to the east and faults to the west of the Bjornoya Basin, from south-eastern part of Stappen High in the west to the West Loppa terraces and the western part of Bjarmeland platform in the east.

Particularly interesting is the search for more Cretaceous submarine fans and stratigraphic plays as seen in the 2011 Ice Bear 3D survey and adjacent 2D data, as well as tracking and mapping the extension of the Jurassic and Triassic tilted fault blocks that are similar to the recently discovered Skrugard and Havis structures farther south. 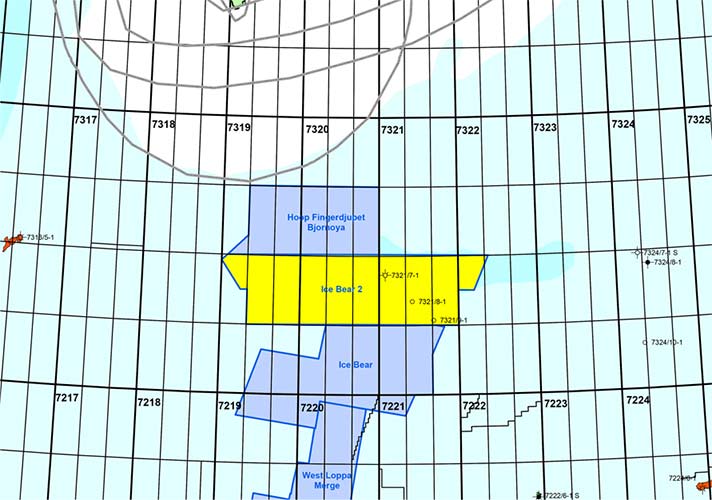 The Ice Bear 2 survey is designed to better image major boundary faults and facilitate stratigraphic ties with wells to the south.

The area of interest lies over the structures and terraces trending to the north as well as the Cretaceous structural and stratigraphic features found toward the Bjørnøya Basin farther westward of the fault complex. These are the principal targets for the survey.

Several terraces can be seen in the east, with attendant bounding faults within the Jurassic section. These have been traced from the Skrugard and Havis terraces in the south through the Ice Bear survey and onward into the Fingerdjupet Basin, where similar basin-edge terraces and fault blocks can be seen. These and the other terrace plays and Cretaceous structures farther west are not easily defined using conventional 2D seismic techniques.

The Jurassic rocks contain the majority of the reservoirs in the Bjørnøya Basin, and the Triassic/Jurassic fault block plays analogous to Skrugard are extremely prospective.

The first dataset processed presented outstanding illumination of the subsurface structure and is available for E&P companies interested in the Ice Bear area.

Extend the bandwidth of your data for any marine acquisition type or technique.

The most widely used migration algorithm in the industry

Accommodate a range of geological settings and acquisition geometries with flexible, amplitude-preserving implementation.

Webinar All the Right Tools: A Multidisciplinary Approach to Subsurface E&P Success