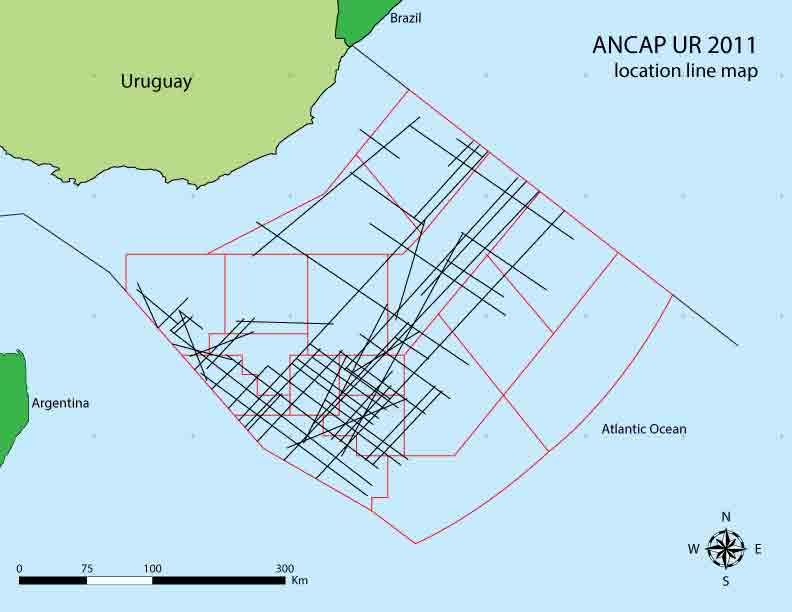 Uruguay’s continental margin is largely underexplored. However, its offshore basins have different tectonic and stratigraphic histories, which present diverse exploratory opportunities. The interesting geology, as well as the analogies with other South Atlantic basins, increase the basins’ exploratory potential. It has been recognized that a northeast depocenter migration took place following the Late Cretaceous period, and a number of structural, stratigraphic, and combined exploratory situations have been identified. Several direct and indirect hydrocarbon evidences do exist offshore Uruguay, including fluid inclusions of light oil and gas, oil seeps, gas chimneys, amplitude anomalies, AVO anomalies, velocity anomalies, and bottom-simulating reflectors.
The new high-quality seismic data is available to assist in reducing exploration risk for the upcoming licensing round. The clarity and scope of the new survey, complementing the legacy data, enables exploration companies to understand and properly evaluate the potential of the basin, including profile of the structure and identification of potential traps.

The simultaneous seismic inversion delivers a breakthrough in the analysis and interpretation of AVO seismic data. Partial stacks can be inverted directly for high-resolution acoustic impedance, Vp/Vs or shear impedance, and density. From these physical properties, lithology, fluid, and other rock properties may be predicted.

The most widely used migration algorithm in the industry

Accommodate a range of geological settings and acquisition geometries with flexible, amplitude-preserving implementation.

Advanced data interpretation to empower your decision making in the upcoming bid round.