A key challenge in reservoir characterization with onshore seismic data is accurately compensating for the extreme horizontal and vertical velocity variations and the complex surface wave noise contamination that result from the highly heterogeneous near-surface geology.

Conventional processing philosophy has regarded these surface waves as unwanted coherent noise and removed them at the earliest opportunity. These attempts have met with variable and typically little success in the presence of highly spatially aliased and complicated multimode scattered ground roll. 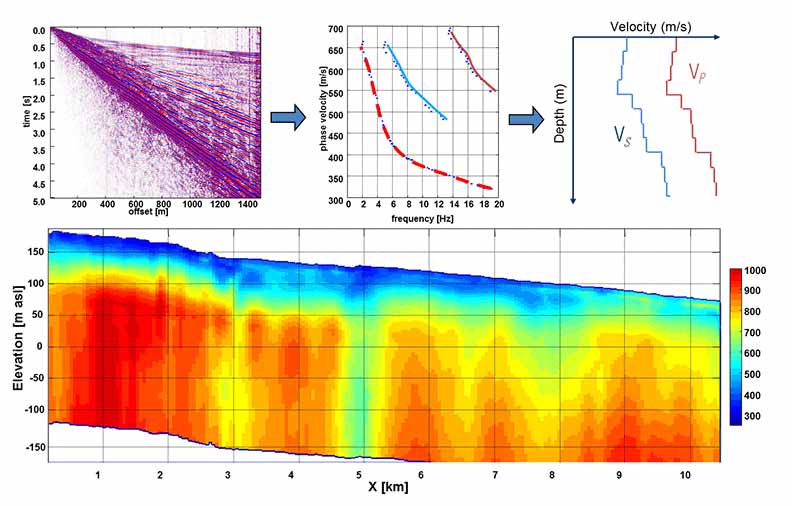 SWAMI inversion enables converting measurements from the analysis of the surface waves into a near-surface velocity model. This model can be added to geological information and geophysical measurements to provide a more accurate representation of the near-surface structure and initiate tomographic analysis as part of the prestack depth migration process.

Prestack depth migration of land data is challenging because of velocity variations in the near surface. Generating a high-resolution velocity model addresses these velocity variations. The near-surface model is also used to calculate surface-consistent statics. Depending on the near-surface geology and additional ancillary information, the surface wave inversion can be used for

Using the same frequency versus phase velocity properties of the analyzed surface waves, SWAMI inversion also enables estimation and removal of the

These types of complex and coherent noise signals that are effectively attenuated using SWAMI surface wave analysis, modeling, and inversion cannot be handled with conventional velocity discrimination techniques, such as f-k filtering.

Integration of different geophysical datasets at the inversion level