Conventional source designature methods assume that the source wavelet is constant for all shots in a single survey and from one survey to the next. However, minor perturbations in wave height, gun pressure, array geometry, and dropouts result in the true source signature varying from shot to shot—reducing the resolution and repeatability of seismic data.

The calibrated marine source (CMS) is our solution for performing an accurate shot-by-shot designature. With proprietary technology, we use the recorded near-field signatures for every gun in the array to generate an estimated far-field signature or wavelet for each shot and optionally at different take-off angles. Each shot record can then be deconvolved relative to the average far-field signature to provide a common vertical signature for every shot in the survey.

CMS is a deterministic method that

Compensating for signature perturbations is a crucial part of stabilizing the seismic wavelet, benefiting both imaging and inversion processes, such as AVO inversion and rock property characterization. In 4D studies, measuring and compensating for variations in the source signature between phases removes a major perturbation from the time-lapse signal. 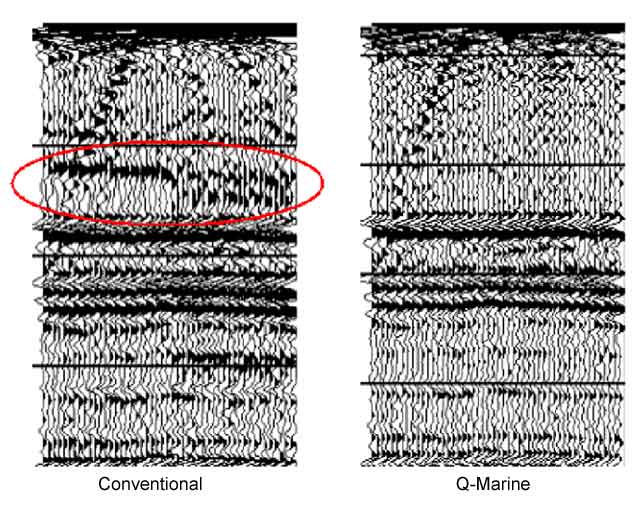 The data anomaly (left) caused by variations in source output is removed (right) with the application of shot-by-shot designature.