Amplitude-variation-with-offset (AVO) seismic inversion has been used extensively in hydrocarbon exploration over the past two decades. Traditional AVO analysis involves computation of the AVO intercept, gradient, and higher-order AVO term from a fit of P-wave reflection amplitude to the sine square of the angle of incidence. This fit is based on the approximate P-wave reflection coefficient formulation in intercept-gradient form, given by Bortfeld (1961) and Shuey (1985), among others. Under the assumption of a background PS velocity ratio, the AVO intercept and gradient values can also be combined to obtain additional AVO attributes such as the pseudo-S-wave data and Poisson’s ratio contrast.

AVO intercept and pseudo-S-wave data are also used in conjunction with prestack waveform inversion (PSWI) in a hybrid inversion scheme. Hybrid inversion is a combination of prestack and poststack inversion methodologies. This combination enables efficient inversion of large data volumes when well information is not available.

All AVO and inversion work is consistent with well log and vertical seismic profile (VSP) data. Integration of all types of data—seismic, geological, borehole, rock physics, and petrophysics—is the cornerstone of our AVO inversion process. The outputs are high-resolution absolute acoustic and shear impedance and density volumes consistent with the seismic data and the well log data. The inverted elastic parameter volumes are used for detailed interpretation of lithofacies and pore-fluid content in the subsurface. Combined with rock physics modeling and rock property mapping through lithology classification (Bachrach et al., 2004) and joint porosity-saturation inversion, the method provides a powerful tool for quantitative reservoir description and characterization. The results are the most-probable lithology classification, porosity, and saturation with uncertainties of prediction at every sample point in the 3D volume. 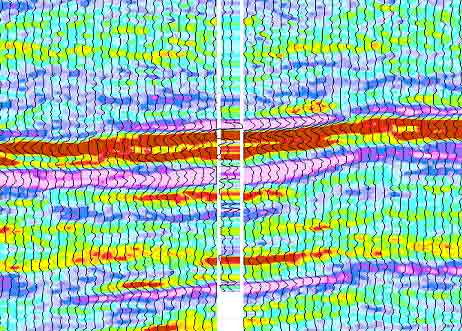 The result of inverting a seismic panel into relative acoustic impedance. Notice the tie with the well.

License an extensive library of 2D and 3D seismic data covering the entirety of offshore Mozambique.

Fill in any data gaps, select an optimal survey location, or even reprocess to achieve a fit-for-purpose result.

Advanced data interpretation to empower your decision making in the upcoming bid round.