Rt Scanner triaxial induction service calculates vertical and horizontal resistivity (Rv and Rh, respectively) from direct measurements while simultaneously solving for formation dip at any well deviation. Measuring at multiple depths of investigation (DOIs) in three dimensions ensures that the derived resistivities are true 3D measurements that are unbiased by the low-resistivity effects of heterogeneous formations. The resulting estimated hydrocarbon and water saturations accurately represent the actual fluid contents, especially for laminated, anisotropic, or faulted formations.

The 1D inversion of the Rt Scanner measurements obtained by the collocated coils produces both dip and resistivity information. Rh runs parallel to the bedding plane; Rv is orthogonal to Rh. 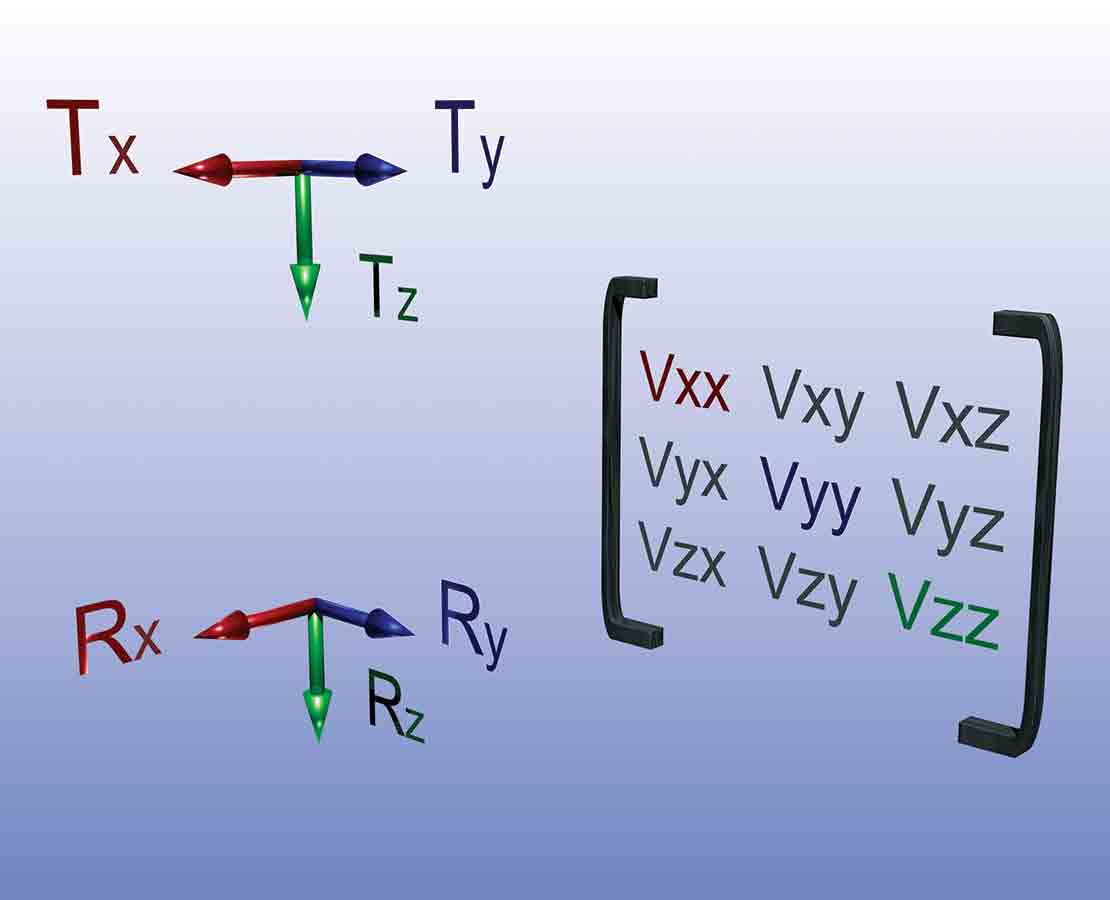 The compact, one-piece Rt Scanner service has multiple triaxial arrays, each containing three collocated coils measuring at various depths into the formation. Inducing currents horizontally and vertically into the formation from one depth point and then receiving them at another mutual depth point provides measurement of the formation properties in true 3D. The multiple collocated receivers also measure at progressively deeper radial depths, with Rv and Rh calculated at each of the triaxial spacings. The borehole signal is fully characterized for removing its effect.

Complete resistivity information from one tool.

For example, Rt Scanner service was run in low-resistivity pay in a channel complex at a relative dip of 60°. The measurements correctly identified low-resistivity pay in the lower zone B of the well that otherwise would have been overlooked. In the higher zone A, Rt Scanner service resolved the bed boundary effects shown as horns in the conventional induction tool’s 10-in resistivity at X,990 and Y,040 ft. The correctly identified true resistivity (Rt) for the channel sands is greater by a factor of 4 than the conventional 90-in resistivity value.

If only conventional logs had been used, the effects of the surrounding shale beds would have resulted in an inaccurately low estimate of oil saturation and consequently of reserves. 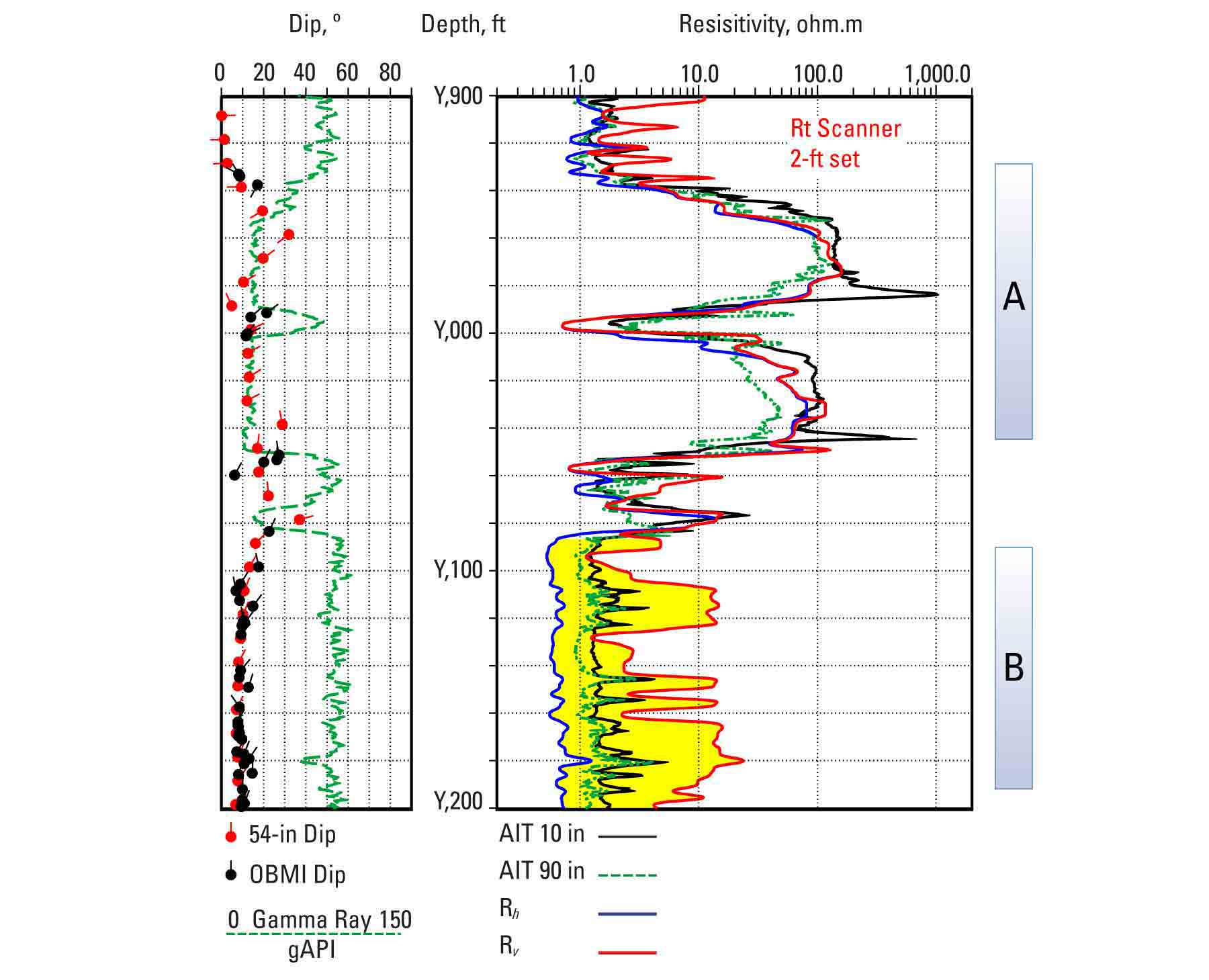 In Zone A, the conventional AIT 90-in resistivity reads low in the thicker channel sands because of the surrounding dipping shale beds. The AIT 10-in resistivity also exhibits significant shoulder-bed horns. The Rt Scanner service's Rv and Rh measurements correct for the dipping shale beds in Zone A. In Zone B, the Rt Scanner service correctly identified a low-resistivity pay zone that otherwise would have been overlooked.

Integrated interpretation of the resistivity data acquired by Rt Scanner triaxial induction service employs advanced workflows, the multidisciplinary expertise of our interpretation geoscientists and engineers working with you as needed, and software such as the Techlog wellbore software platform to maximize the value of your logging data.

Vertical resistivity and horizontal resistivity are obtained to perform a laminated sand analysis and accurately determine the net pay in thinly bedded sand and shale sequences. We can also determine the formation dip and analyze the dip patterns for structural features such as slumping or faults. Fracture detection can be conducted using our proprietary software. The result is the fullest possible understanding of complex lithologies that cannot be definitively characterized by conventional resistivity measurements. 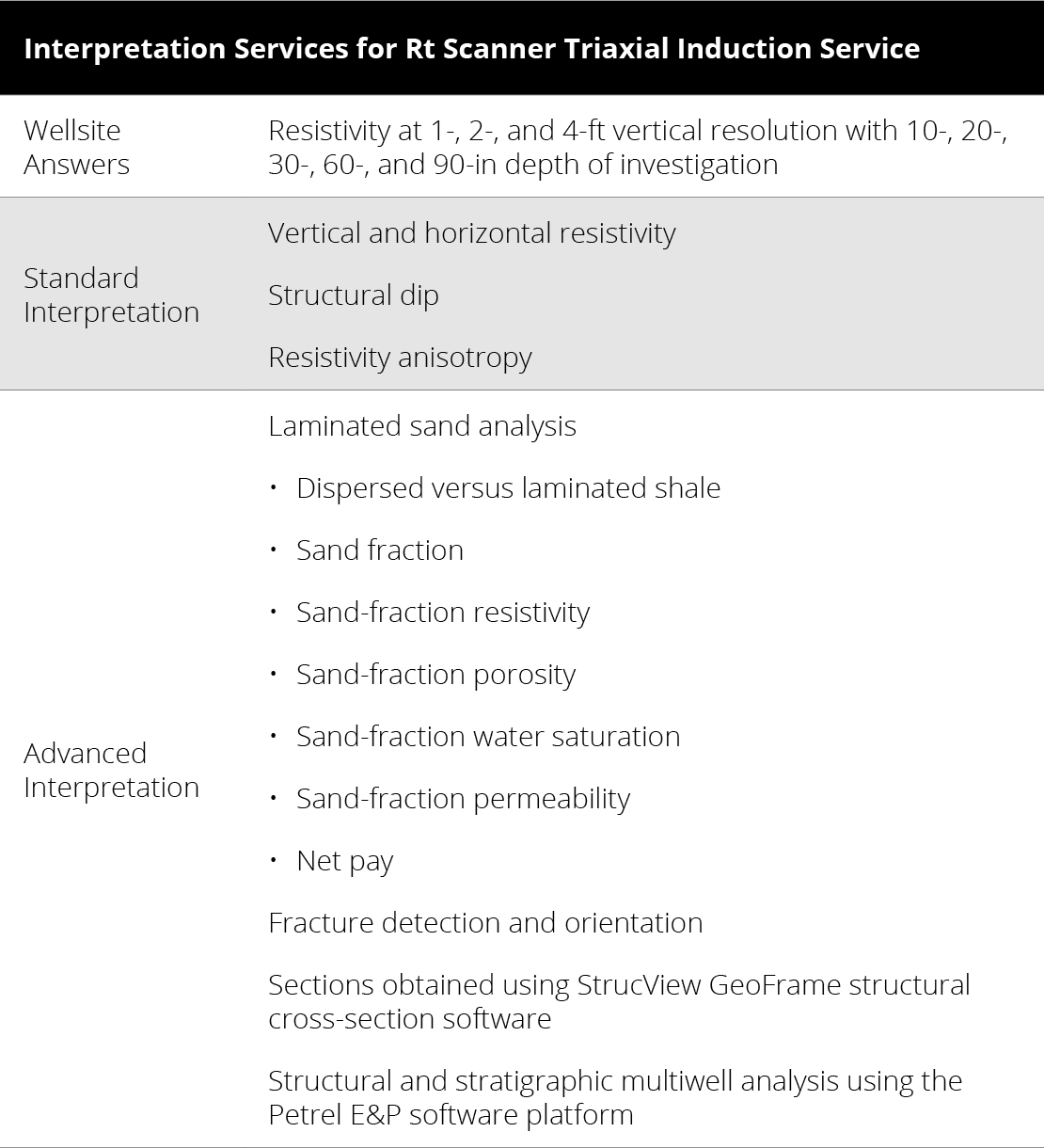 Geological workflows that enhance the value of data acquisition

Visualize the reservoir with microresistivity imaging in oil-based, nonconductive, and invert-emulsion mud systems.

Schlumberger brought together expertise and technologies from drilling fluids, wireline, testing services, and completions to help meet the operator’s objective to begin first production in mid-2019.

Effectively evaluate, on a well-by-well basis, the quality of the reservoir.

Covers acquisition of high-quality data at the wellsite and its delivery within defined standards.