Scale buildup on ESPs is a common occurrence. The scale builds up on the motor housing over time, affecting the cooling efficiency of the system and raising the pressure on the ESP. This often happens with no outward indication to the operator. If scale continues to build unchecked, threatening events such as high pressure or motor overheating can occur, in which case the ESP controller shuts down the well to protect the system.

For a conventional field where surveillance is limited to episodic production data from test separators, the unnecessary downtime begins as soon as the ESP shuts down. For these fields, the sole purpose of downhole gauges is to enable diagnostics of the shutdown cause after the event, when the operator mobilizes a field crew, downloads sensor data, analyzes the well performance, and begins remediation. This can last days.

Khalda Petroleum Company could have been faced with these challenges when one of its artificially lifted wells in the Egyptian West Desert started to build up scale, if it had not taken one important preventative measure.

When Khalda Petroleum Company entered the Egyptian West Desert in 2010, its engineers chose to equip wells with Phoenix xt150 standard ESP monitoring systems and asked Schlumberger to perform the Lift IQ service. When scale started to build on an ESP in one of its wells in 2014, the operator had the right tool to diagnose the situation—before it became a problem. The Lift IQ service delivers 'round-the-clock remote surveillance of all artificial lift systems, preventing or resolving ESP downtime, misuse, or failure. Experienced engineers monitor alarms and analyze data transmitted from multiple wells across fields simultaneously in real time, up to 24/7/365, at one of many Schlumberger Artificial Lift Surveillance Centers (ALSCs).

The Lift IQ service indicated the rise in intake pressure and motor temperature in real time, which the ALSC engineers recognized as an early symptom of scale buildup. The remote monitoring and control system enabled the ALSC engineers to immediately respond by decreasing the motor loading and prevent the well from tripping. Schlumberger then took action on-site by clearing the scale with acid washes injected through coiled tubing directly on the discharge head of the pump. Without the acid treatment, the motor could have continued to overheat until failure.

For more details about the well and operation, see SPE 177926. 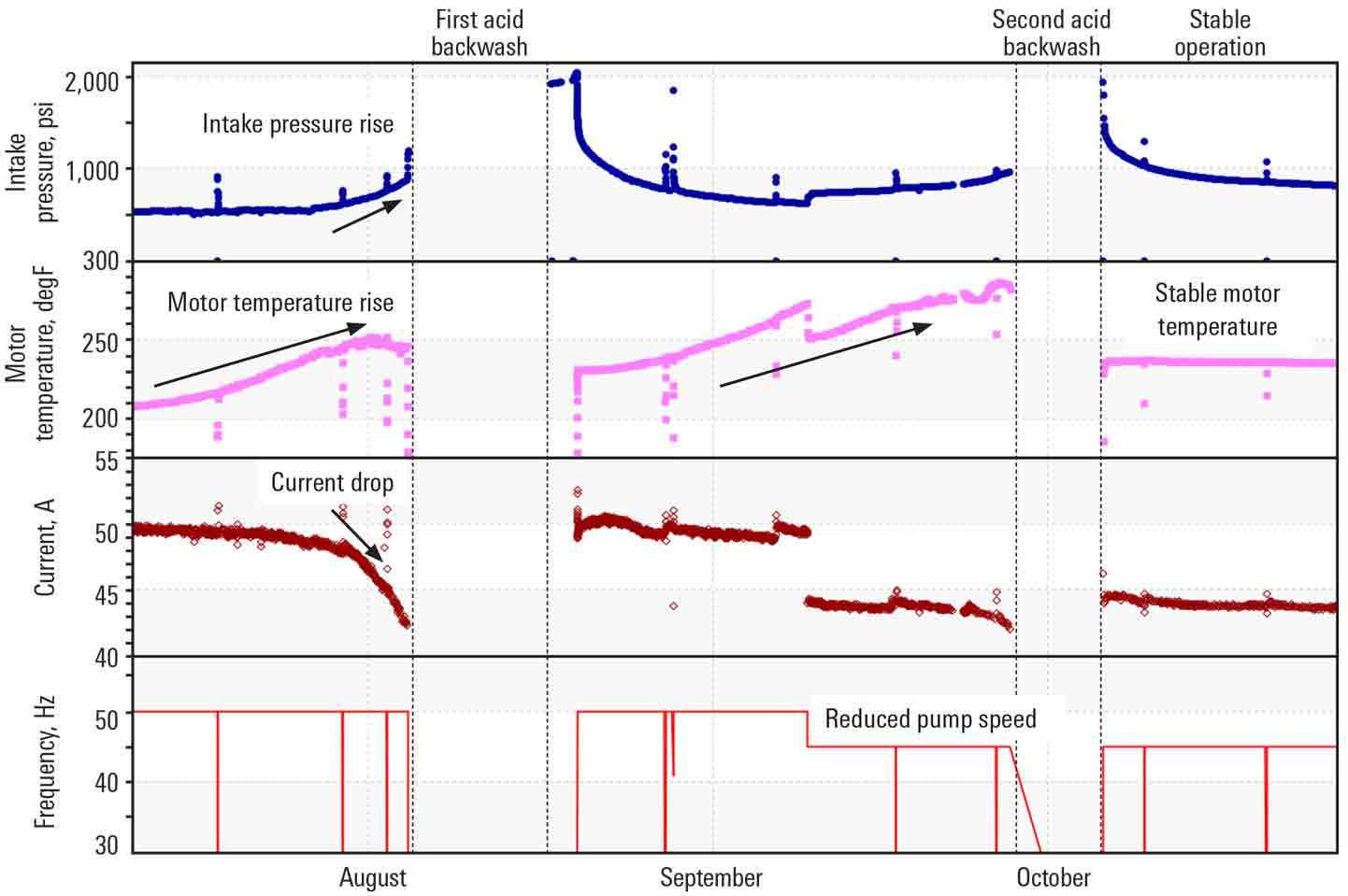 The Khalda Petroleum Company well experienced partial plugging due to scale deposition. The issue was identified and an acid wash was performed. However, the Lift IQ service showed that motor temperature continued to rise after the acid wash, so the ESP speed was remotely reduced to lower the temperature.
Products Used
Lift IQ
Production life cycle management service