Horizontal drilling and hydraulic fracturing technologies increased interest and initial production from the Mississippi Lime formation near the Oklahoma-Kansas border, but Chesapeake Energy found that rapid production declines, solids production, and high gas volume fraction challenged the performance of conventional ESP technology. Gas lift alone was an option to produce the wells, but Chesapeake wanted to use ESPs to accelerate production and cash flow. With their ESP run life averaging 118 days, Chesapeake needed a new solution to improve lifting costs.

The company asked Schlumberger for technology that could efficiently and flexibly handle oil production from initial levels near 4,000 bbl/d [636 m3/d] down to 400 bbl/d [63.6 m3/d] or less after a year of operation, and multiphase flow with increasing GLR from 300 to 1,700 cf/bbl [53 to 303 m3/m3]. The production was also expected to include solids from fracturing operations.

Schlumberger engineers began by redesigning the pumps to survive the expected conditions. Abrasion-resistant compression pumps were chosen to minimize risk of failure from sand production while functioning over a wide range of production volumes. Protectors with high-load thrust bearings were selected to carry the maximum downthrust from the pumps when operating at low rates. The pump configuration was also modified to add redundancy to sealing chambers. An MGH system and VGSA assemblies were installed to maximize flexibility for multiphase flow, especially during transient events. All systems were also designed to start operating at 50 Hz or less to minimize abrasion wear and accommodate the increasing GLR. 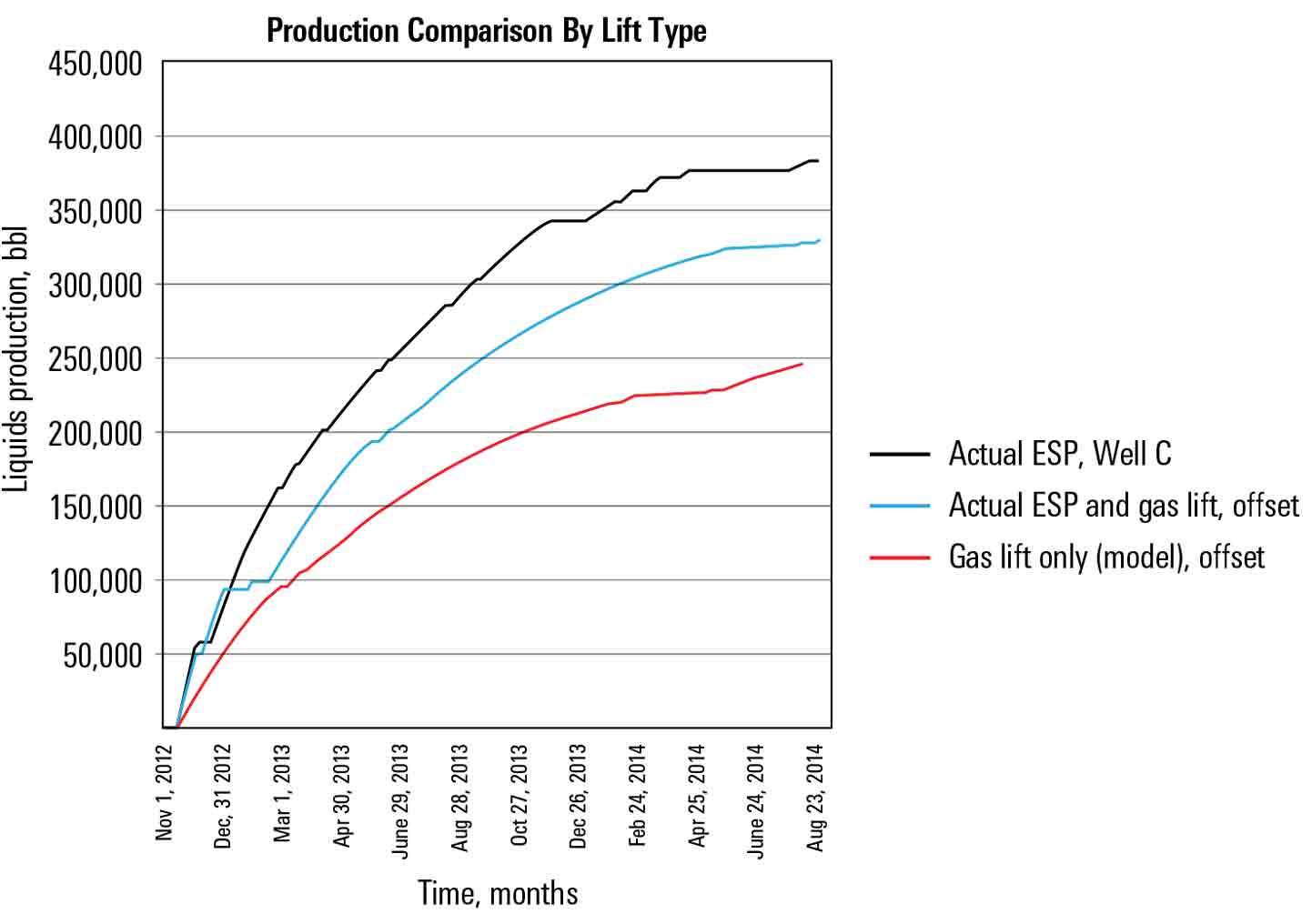 Upgraded ESPs were installed in seven wells. Three were pulled out of the wells prematurely when chunks of damaged plug and packer rubber clogged the intake or pump stages. Excluding those pumps, the average run life of the new ESP systems increased 2.81 times up to 332 days. Overall, the pumps managed as much as 94% production decline from more than 5,000 to 300 bbl/d [795 to 48 m3/d] and up to 243% increases in GLR with even higher transient events.

In Well C, the ESP system ran for 654 days through a steep fluid production decline from 4,275 to 750 bbl/d [680 to 119 m3/d] in just 5 months, and a slower drop to 350 bbl/d [56 m3/d] with GLR of 1,200 cf/bbl [214 m3/m3]. Cumulative uptime for the pump was 68.2%, with most of the downtime occurring for manual shutdowns, ESP trips for motor temperature during low- or no-flow events, and power-generation issues. This well also benefited from the Lift IQ service, which analyzed alarm incidents to optimize pump performance as downhole conditions changed, and to guide decision-making after communication from a nearby well. Well C also demonstrated the benefit of the ESP for accelerating production: At the end of its ESP lifetime, Well C had 16% more cumulative liquid production than a comparable offset produced with only 53 days on an ESP followed by gas lift, and 55% more cumulative liquid production than was modeled for gas lift alone. 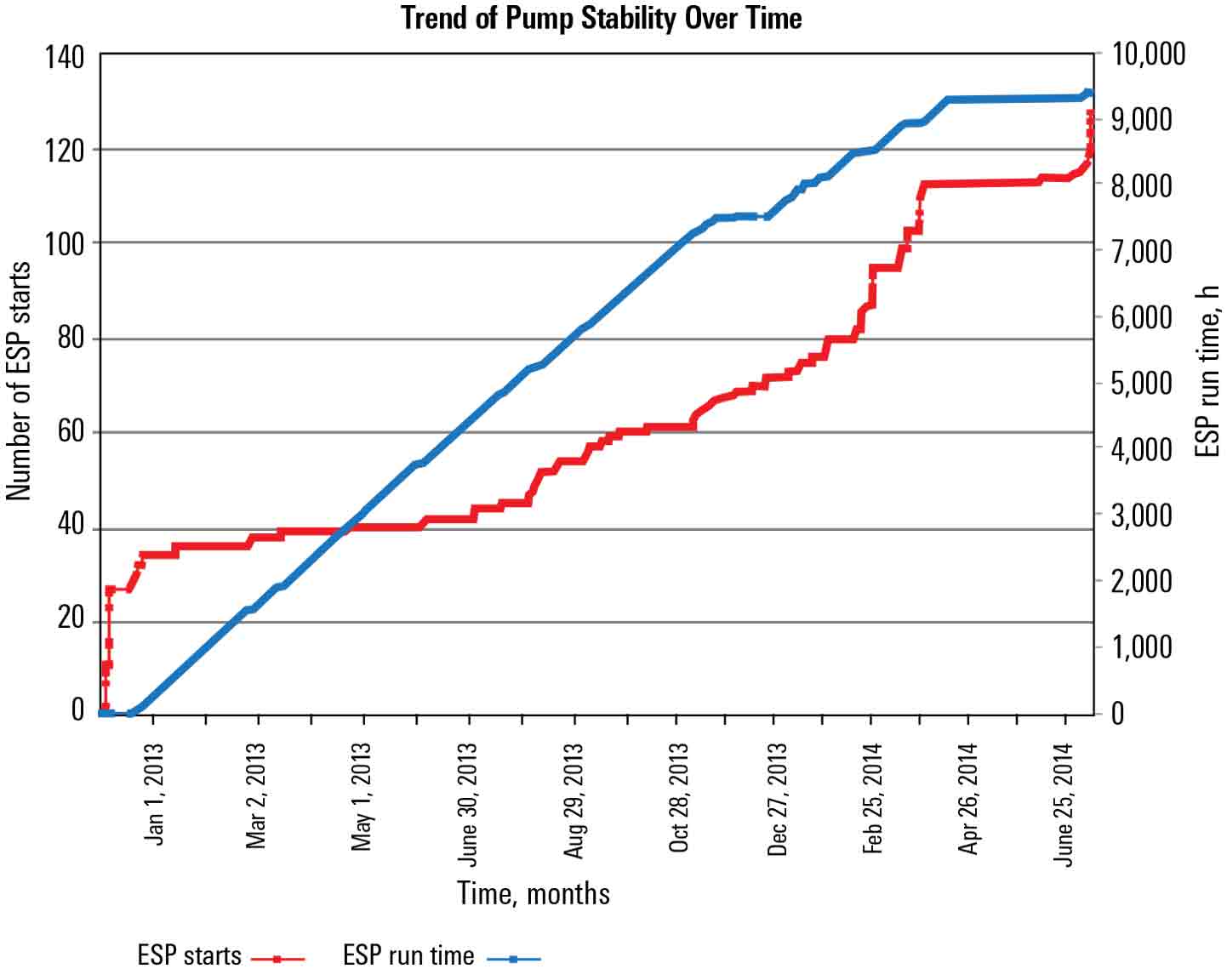