Shell traditionally used desander tools with six joints of tailpipe and a bull plug in every ESP well as a standard sand mitigation effort. Desanders are installed below the ESP as part of the bottomhole assembly (BHA), and centrifugal action separates solid particles from well fluids and stores them in the tailpipe. When the tailpipe is full, the sand passes through the centrifugal pumps with the well fluid, eroding the ESP pump stages, bearings, and shafts and causing degraded lift capability. In addition, sand deposition within the pump leads to ESP motor overloading, which damages the electrical integrity of the ESP. When the electrical system fails, Shell must pull the BHA out of the well and replace it with new equipment.

In Shell's experience, the tailpipe fills with sand after about 3 to 6 months of production, causing the ESP to fail soon afterward.

Filter sand and solids before the ESP

The pump protection system comprises a 3D filter capable of filtering out particles of 15 to 600 um and a valve assembly that creates a secondary flow path. A MeshRite stainless steel wool screen catches large quantities of sand and solids, including mesh sizes much smaller than those separated by the desander. When the screen is plugged, a PumpGuard intake sand control screen and valve assembly opens to enable flow past the screens and into the ESP. The system can handle more sand as compared with a desander tailpipe, thus extending ESP run life.

Shell ran five pump protection systems with Schlumberger and third-party ESPs. The run life of the ESPs improved by an average of 35%, with constant production volumes and slow drawdowns. In addition, the number of ESP shutdowns related to sand and solids was reduced by more than 90%, improving longevity of electrical components. The success rate of ESP startups after planned and unplanned shutdowns also improved by 32%.

The increased uptime improved Shell's business performance, even considering the cost of the sand control systems.

The field data enables Shell to select the optimal sand control system, based on value, for ESP wells in fields known for downtime caused by severe sand production. 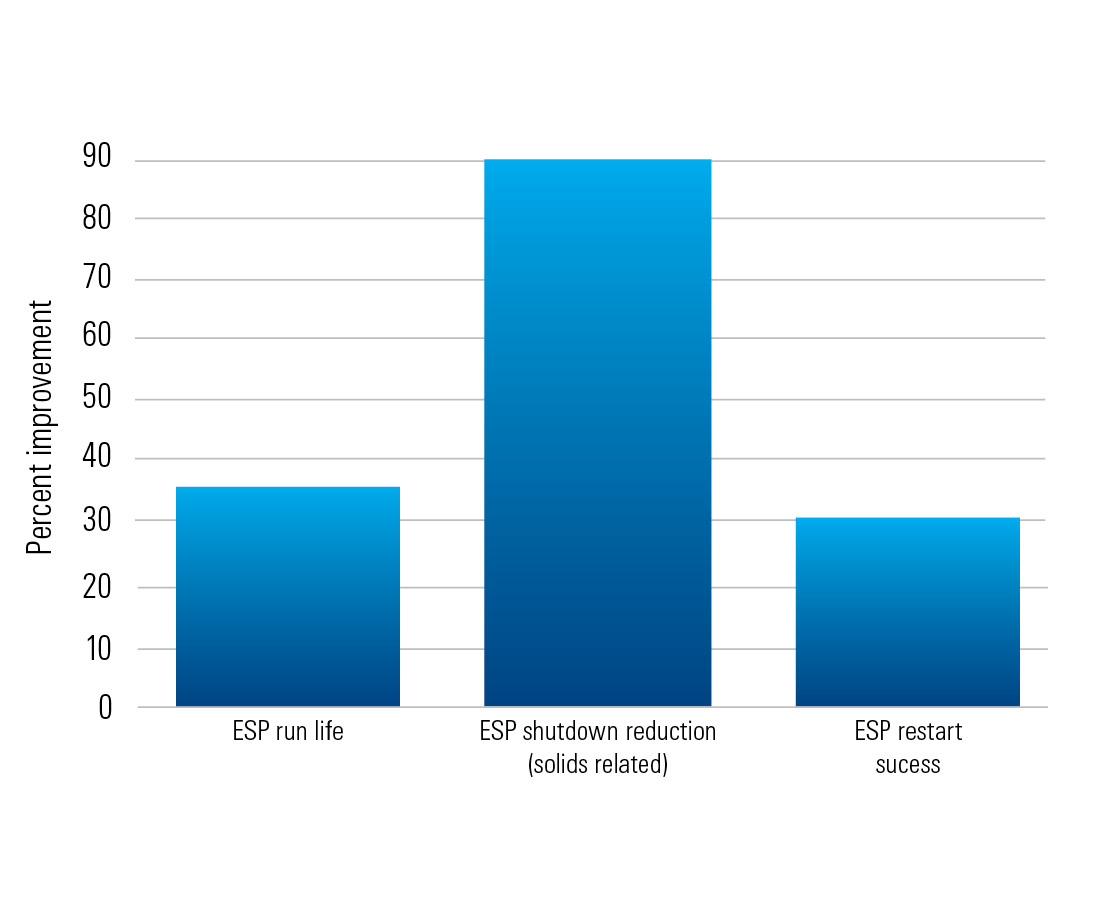 In one of the five test wells, the ESP intake pressure signature (blue) rises suddenly when the MeshRite screen is plugged and the PumpGuard assembly opens. This pressure signature enables further improvements in production efficiency by predicting the impending sand-related ESP failure so replacement operations can be scheduled.
Products Used
MeshRite Stainless Steel Wool Screens

Address unconventional sand control applications for which traditional screens and techniques are insufficient.