Challenge: Optimize cleanup and production in all zones of an extended-reach horizontal well through four reservoir segments with different permeability properties.

For a new extended-reach well, an operator needed a way to optimize production from six productive zones in four reservoirs with dissimilar permeabilities and pressures. Earlier in the project, the operator used conventional extended-reach completions composed of screens and passive inflow control devices (ICDs). Although the ICDs and nozzles were engineered for the expected reservoir conditions, uncertainty in estimated reservoir properties resulted in the wells experiencing early gas breakthrough. Because the wells did not have a monitoring system to enable better understanding of flow potential, the wells required multiple interventions to manage the production uncertainty.

For the new well, the operator wanted to address the uncertainties with active flow control and measurements to better characterize zone potential and to drain oil without gas breakthrough. This would only be possible with a completion that could be installed to the full depth of the long horizontal well and deliver zonal measurements and control from surface in real time. 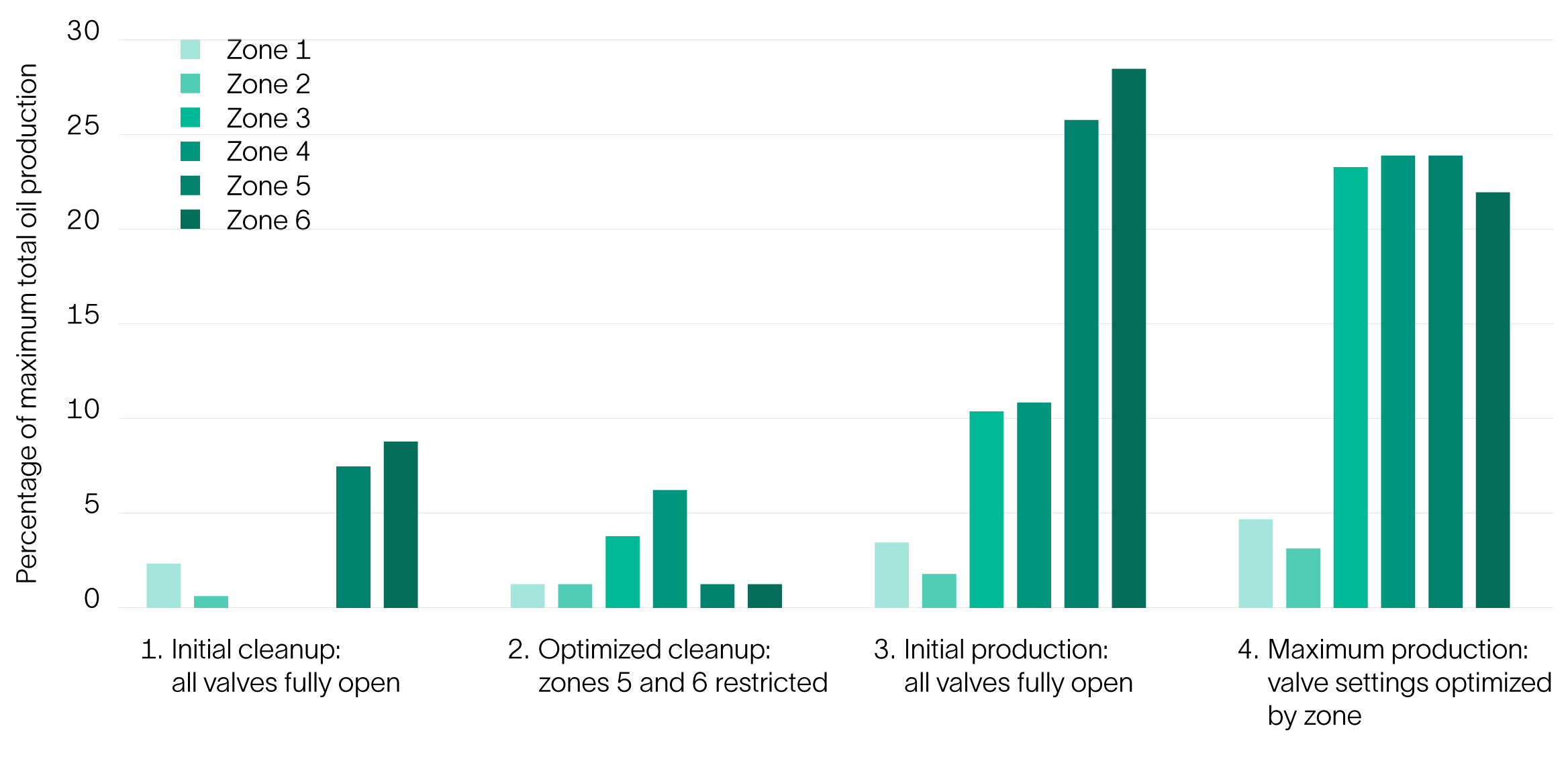 On initial cleanup (1), zones 3 and 4 contributed no oil production. To clean up those zones (2), the engineers choked back zones 5 and 6. After the damaged zones started to flow (3), all valves were opened fully to determine initial production. Finally (4), optimizing the valve settings maximized recovery, resulting in 25% higher production compared with production when opening all valves fully.

Schlumberger recommended the Manara system, an all-electric intelligent completion that can be deployed at extended distances in one or two trips to cover multiple structural plays from one onshore drillsite. Powered and controlled by a single electric umbilical combined with the inductive coupler downhole connector, the technology enables real-time downhole zonal intelligence and control.

The onboard production-monitoring suite with infinite choking capability enables effective zonal cleanup, productivity assessment and optimization, and early identification and management of future production challenges. Digital-ready by design, the Manara system delivers health data to a centralized production database, enabling continuous monitoring for operations integrity. WellWatcher Advisor software can then be used to monitor and manage drainage through production and reservoir workflows in real time—all without intervention!

At the initial well kickoff, engineers fully opened the flow control valves for all six zones and measured oil production, with significant contributions from zones 5 and 6, less from zones 1 and 2, and no flow from zones 3 and 4. Reservoir analysis indicated that zones 3 and 4 should be significant producers, so the operator believed the permeability was damaged with drilling mud. With a conventional completion, cleaning the tight zones would have been impossible.

With the Manara system in the well, the engineering team choked zones 5 and 6 to increase drawdown in the damaged zones. The pressure change induced flow that cleaned up the permeability damage without further intervention. After the zones stabilized, the engineers reopened all the flow control valves and measured overall production, with contributions from all zones, including the two previously damaged zones.

To maximize well production, the engineers then used WellWatcher Advisor software to calculate the optimal setting for the flow control valve in each zone. The result was a production increase of 25% compared with the production when all valves were fully open—including 47% from the two damaged zones that would not have produced at all without the real-time drawdown control.

Optimize recovery by monitoring and controlling flow from many zones and compartments in real time, even in multilateral wells.