An operator in China had set high-level, 15-year production targets for a large oil field, where average well production was low. The goals were to enhance the annual oil production rate while balancing the reserves and production, and to reach a stable annual gas production rate of 500 million cubic meters. Due to the low production, recovery was typically enabled by the use of rod pumps, which were used rather than submersible pumps because of standard practices in the area and the lower costs.

In selecting the type of completions for this field, the operator had several constraints. First, the production area was located below an industrial zone and several cities, so access was limited and interventions would be especially challenging.

Second, the operator's production targets and timeline required an efficient, economical approach to completing the wells. For these reasons, the operator chose to use multilateral drilling and completions, even though this technology was generally considered cost-prohibitive in low-production environments. Multilaterals would limit the amount of energy required and improve the production of single wellsites by connecting multiple wellbores to a single wellhead. The smaller multilateral footprint would reduce the amount of surface equipment and personnel needed, and lower HSE risks and costs.

A third constraint was related to the rod pumps, which require frequent workovers for operations such as acid wash, reperforations, and cement squeeze. It was important to select a multilateral junction that would ensure full access to each lateral and easy retrieval. 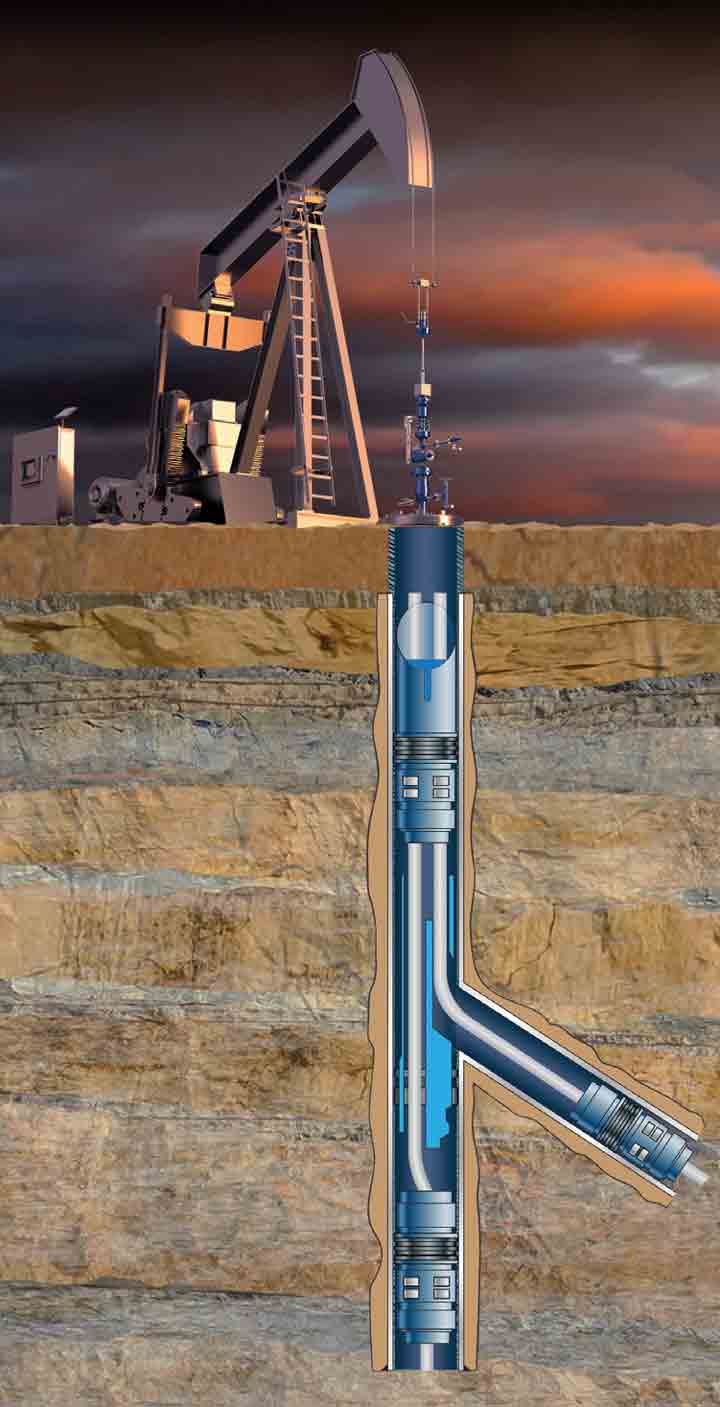 The specially designed seal and interlocking rail system of the RapidX junction prevented water at the junction from exiting through the completion. Oil- and water-swellable packers were run with the slotted liner in the lateral to isolate the casing window from potential water breakthrough and coning.The junction provided full access in each leg.

Finally, the potential for a high water cut made it critical to select a junction with a tight seal that would effectively isolate the window from potential water breakthrough and coning.

Schlumberger recommended its RapidX TAML Level 5 interlocking-rail, stackable multilateral junction. Wells with Level 5 junctions had never before been used with rod pumps, but the numerous advantages and the RapidX junction's operating simplicity encouraged the operator to use this new completion design.

The RapidX junction is a mechanical tubing junction with internal and external pressure integrity. The junction features a specially designed seal that creates one of the strongest TAML 5 junctions in the industry. This seal, along with a mechanical, continually interlocking rail system that resists internal and external pressure, prevents water at the junction from exiting through the completion. The junction provides full access in each leg and does not require cementing. It is retrievable and has performed effectively for extended periods—more than 10 years in some cases, both important factors in rod pump installations.

The proof-of-concept well had a vertical section above the lower lateral. After the upper section casing was set and cemented, a casing window was milled in the vertical section above the target zone. A high-angle section was drilled to land a horizontal well, which was run with slotted liner and swellable packers. In this particular well, because of the water zone at the junction level, a combination of oil- and water-swellable packers was run outside the milled window and below the polished bore receptacle. This option was cost-efficient and enabled the window to be isolated from potential water breakthrough and coning.

Success validates use of multilaterals in low-production area

The installation was successful, and there were no injuries or NPT. The operator achieved its main goals of increased production with a lower water cut than that of nearby wells. The operator saw that this simple completion and lift combination would work well in the low-production field and highly populated area and would help optimize return on investment for future wells.

The success of this well also showed that the RapidX TAML 5 multilateral junction is a viable option for a more diverse range of applications than previously thought, including wells using traditional rod pumps for production.

Isolate up to 2,500 psi [17.2 MPa] at the junction, and combine simple installation with flexibility.