Optimally positioned wells show minimal drawdown in tests at up to 8,000 bbl/d

For DONG E&P, the Nini East field in the Danish North Sea sector presented a significant drilling challenge. The operator's target—the glauconite-rich sandstone Kolga Member reservoir—was 7–16 ft [2–15 m] thick, comprising post-depositionally remobilized sand capped by unstable shale. Although initially deposited as gravity flow sands, they have since been remobilized under burial, leading to sand fluidization and injection along weakness zones such as faults and low-competent stratigraphic levels. This makes determining the exact stratigraphic location of the sand difficult. Accurate reservoir steering is, therefore, of the utmost importance for optimal well positioning.

Because of the reservoir's nature and low resistivity, conventional landing methods and current bed-boundary mapping tools were not ideal for this steering challenge, as they could only provide a depth of investigation of less than 7 ft [2 m]. This limitation did not provide the confidence required for timely trajectory adjustments given the complex geology of the reservoir, such as sudden structural dip changes. Previous wells drilled in similar reservoirs have been marginally economical, with net-pay ratios below 0.5 and an increased need for sidetracks. 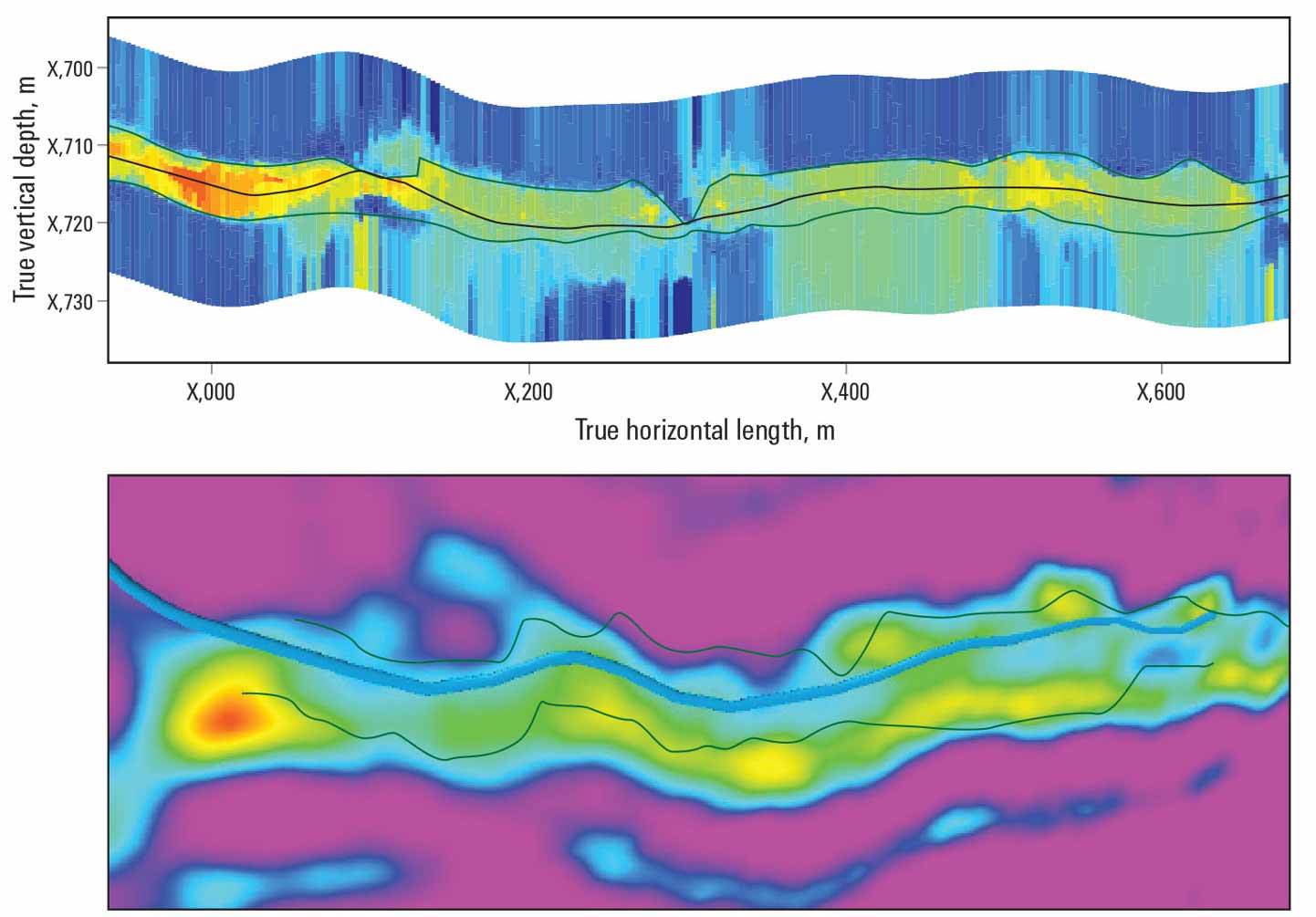 Data from the GeoSphere service and a seismic acoustic impedance section on the same level led to reservoir exposure of 2,674-ft [815-m] MD, representing a net-to-gross ratio of 0.98 in the first well.

In considering the complexity of the reservoir structure, DONG E&P decided to use the GeoSphere reservoir mapping-while-drilling service to steer two planned horizontal production wells. The extended depth of investigation of the service provides a map of the reservoir 100 ft [30 m] from the wellbore. Deep directional electromagnetic measurements from this service are within the same range as surface seismic measurements, and the two data sources can be overlayed in real time while drilling to provide important look-ahead information for optimized landing. This is especially significant given the complex geometry of the Kolga Member reservoir.

The combination of electromagentic measurements from the GeoSphere service and surface seismic made it possible to steer ahead of reservoir structure shifts. With better informed steering, the wells were placed within the thin reservoir away from unstable shale and drilled completely to TD. The two horizontal wells were steered optimally in the reservoir—96% in zone—with no sidetracks. Both wells were tested at up to 8,000 bbl/d with minimal drawdown.

Understanding of the reservoir and its heterogeneity was also greatly improved. The information from the GeoSphere service was critical in refining the reservoir model and, ultimately, for the long-term management of the field.

Because of the successful well positioning and the valuable reservoir mapping data acquired during drilling, DONG E&P plans to run the GeoSphere service for future campaigns.