Challenge: Maintain wellbore stability while performing a horizontal extended-reach drilling (ERD) operation in an offshore environment with a high possibility of drilling through faults.

While developing the Korchagina field from an ice-resistant stationary platform in the Caspian Sea, LUKOIL-Nizhnevolzhskneft wanted to drill a challenging horizontal ERD well. This well would be the longest in the project—a 5,555-m horizontal section at 9,000-m MD and 1,565-m TVD. The last 1,500 m of the horizontal section was expected to exit the seismic cube boundaries where geosteering would be the most challenging because of structural uncertainty.

Adding to the operation's difficulty was the anticline structure's several faulted zones, which could lead to significant mud loss and downtime caused by wellbore instability. Streaks of hard formation were expected inside the pay zone, and the drilling environment included several intervals with high shock and vibration as well as the risk of stick/slip, which could result in Schlumberger tool failure downhole. The operator also had to avoid colliding with existing production wells, maintain competitive NTG, and achieve planned production rates in the high-structural-uncertainty reservoir. 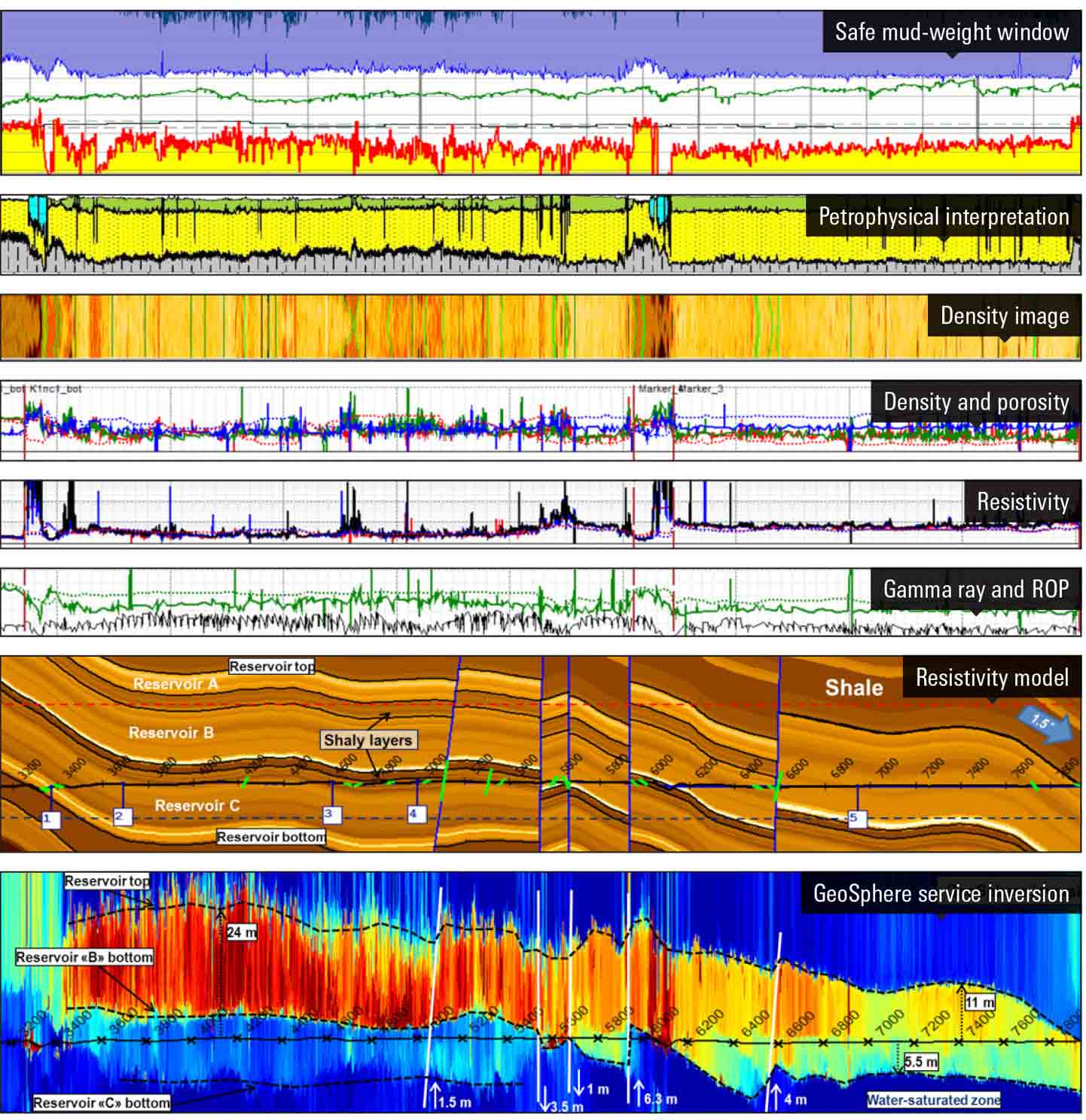 The GeoSphere service mapped formation boundaries that were located up to 24 m from the wellbore, allowing LUKOIL-Nizhnevolzhskneft to geosteer the well with only 5 trajectory changes compared with an average 15–20 in previous wells. As a result, the wellbore was optimally placed in the target formation with a NTG of 88.5%.

Drilling the long horizontal section required thorough planning and collaboration between cross-domain teams of Schlumberger engineering experts at the regional PetroTechnical Engineering Center (PTEC). The PTEC teams performed a complete technical analysis that considered the complex environment, including faults, fluid contacts, and transition zones. GeoSphere reservoir mapping-while-drilling service and a number of other Schlumberger technologies and services were chosen to address LUKOIL-Nizhnevolzhskneft's challenges. The GeoSphere service mapped formation boundaries that were located up to 24 m from the wellbore, helping to confirm the oil/water contact.

The PTEC used the IDEAS integrated dynamic design and analysis platform and the i-DRILL integrated dynamic system analysis service design to identify solutions that would minimize vibrations and stick/slip during drilling operations as well as optimize BHA performance for the environment. A Smith Bits 9½-in SHARC high-abrasion-resistance PDC drill bit fitted with a central Stinger conical diamond element was chosen to increase PDC bit durability and ROP.

Schlumberger utilized a 3D geomechanical model that allowed identifying the safe mud-weight window and mitigating geomechanics-related risks in real time. While drilling, the team used the MEGADRIL oil-base drilling fluid system from M-I SWACO and monitored equivalent static and circulation densities (ESD and ECD) to be within recommended limits.

Because of i-DRILL system and IDEAS platform modeling, the drillstring and drill bit experienced almost no shock, vibration, or stick/slip. This reduced the load on the BHA and bit and allowed reaching TD without tool failure. Collision risks were also minimized because of the GRS service on this project.

Only five trajectory changes were required while geosteering compared with an average of 15–20 in offset wells. This led to less wellbore curvature and reduced drilling time due to fewer downlinks. LUKOILNizhnevolzhskneft was later able to run liner without rotation down to 7,000 m.