Shell Brasil Ltda.'s deepwater campaign required drilling horizontal production sections of two wells in different fields offshore Brazil that were believed to have structural areas with stacked turbidite reservoir sands. It aimed to maximize production by steering the horizontal sections to keep them within the reservoir's sweet spots and to improve reservoir understanding by mapping the sand packages. Multiple fault blocks in the planned well paths and depth uncertainty in the available seismic data made achieving those objectives a challenge.

Detect reservoir boundaries as much as 100 ft from wellbore

To meet the objectives of both wells, the GeoSphere reservoir mapping-while-drilling service was selected for its deep electromagnetic directional measurements that could resolve the positions of reservoir boundaries as much as 100 ft [30 m] from the wellbore. These measurements are used to guide steering decisions and delineate intrinsic layering of contrasting resistivity within the reservoirs. The BHA included a point-the-bit rotary steerable system for precise trajectory control and advanced LWD tools to acquire petrophysical information for reservoir evaluation. 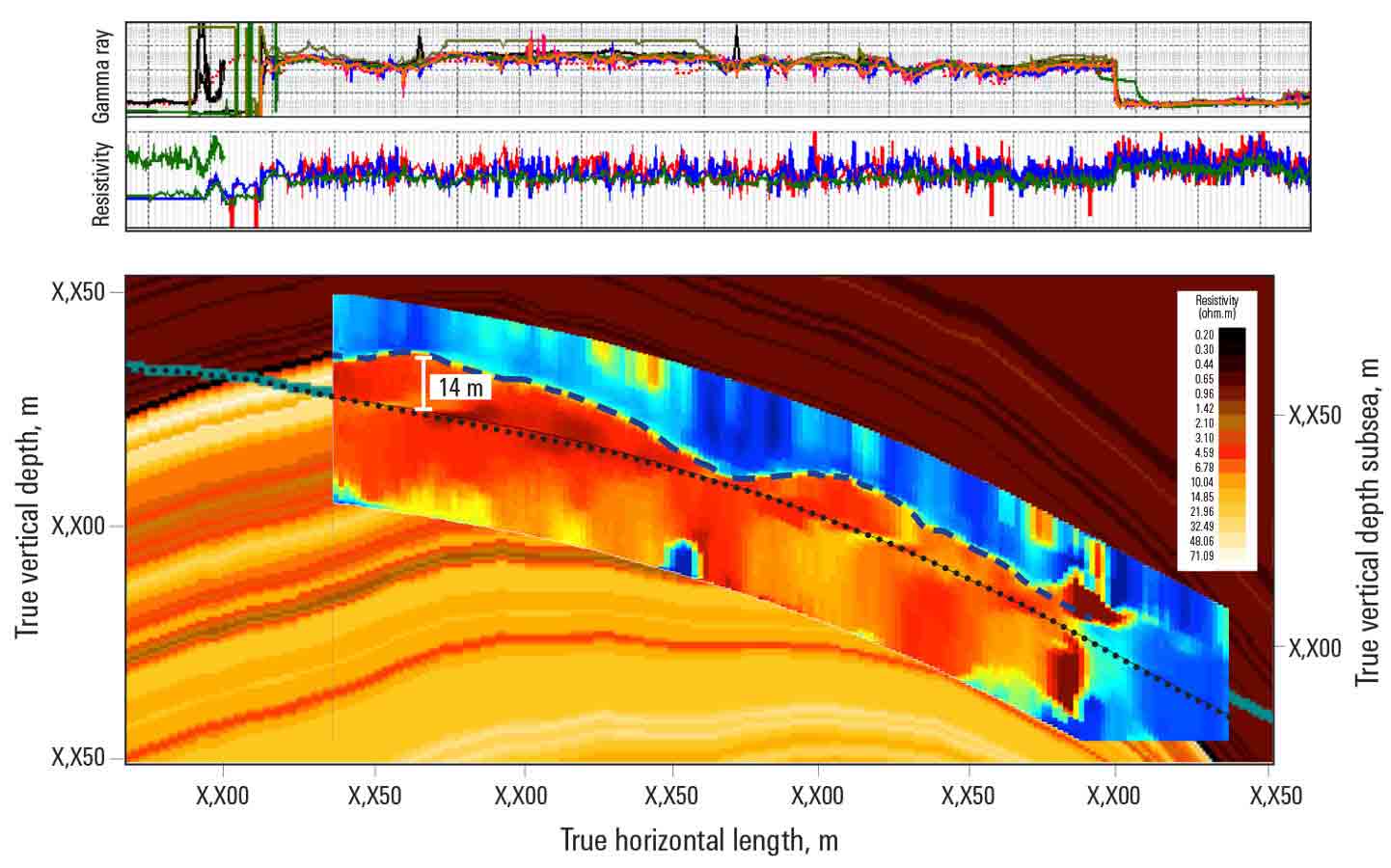 In the first well, when the GeoSphere service showed the top of the reservoir to be lower than indicated by the original reservoir model, the trajectory was altered to intersect the second structural area.

In the second well, the depth of investigation of the GeoSphere service allowed access to reserves on both sides of the fault.

The plan for the second well was to steer the horizontal production section to access reserves on both sides of a secondary fault. Proceeding from the landing point, the planned horizontal well path would first traverse the reservoir in the lower fault block and then cross a normal fault into the upper fault block, where the reservoir was expected to narrow.

Upon exiting the casing shoe in the second well, the inversion mapped the reservoir top about 13 ft [4 m] above the wellbore while simultaneously mapping the base of the reservoir along the horizontal section. The wellbore crossed a fault, and the deep electromagnetic inversion showed good delineation of the reservoir, correlating to what was expected from the initial model of the lower fault block. In the upper fault block, the GeoSphere service revealed unexpected geometry and previously unknown stratigraphic events.

The GeoSphere reservoir mapping-while-drilling service guided steering in these two wells and several additional wells in the campaign. This enabled Shell to optimize reservoir exposure and avoid unplanned exits from the target reservoirs, despite depth discrepancies in reservoir models. Additionally, the service provided information for refining geological and structural models and for optimizing production management and ROI.