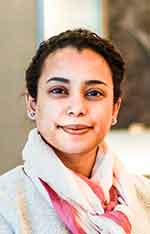 Ranaa started her career in 1997 with Schlumberger and over 20 years has covered field operations, human resources, sales and management. She started as a well engineer in Gabon, Canada and Ecuador. She subsequently held sales and operations management positions for Drilling & Measurements division in Indonesia and Qatar/Yemen as well as the general manager position for Azerbaijan. Prior to her current role, Ranaa held two executive leadership positions with Schlumberger as worldwide VP Integrated Services and VP Bits and Drilling Tools for Europe and Africa.

Ranaa has a BS in Mathematics and Humanities from the Colorado School of Mines, United States, and an MSc in Petroleum Engineering from Imperial College, London.

Ranaa takes special interest in sustainability and views the Foundation’s role as pivotal in enabling talented women to have direct impact and positive footprint in their home countries upon graduation. Ranaa joined the Board of the Foundation in 2007.