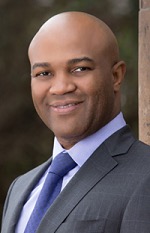 Robert Onyejekwe is currently Vice President for Sales and Commercial for the Reservoir and Infrastructure Group. Prior to his current role, Robert was President of the Schlumberger Bits and Drilling Tools product line with executive leadership, global strategy and business management responsibilities. From August 2014 to July 2017, Robert was the Vice President and General manager for Schlumberger Sub-Sahara region.

Starting his career with Schlumberger Drilling and Measurements field operations in 1996, Robert has held various field, engineering, human resources and line management positions. In a career spanning over 20 years, Robert has worked in four continents.

Robert has participated since 2015 as a volunteer member of the faculty of the future panel that selects and awards fellowships to women from developing and emerging economies to pursue PhD or Post-doctorate studies in STEM disciplines at leading universities worldwide. Robert joined the board of the Foundation in April 2017.