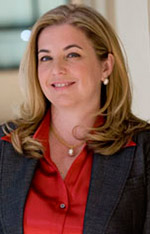 As of July 1, 2014, Dr. Vicki Colvin is Provost and Professor of Chemistry and Engineering at Brown University, Providence, Rhode Island, United States. Prior to her appointment at Brown, Dr. Colvin was Director of Rice University’s Center for Biological and Environmental Nanotechnology (CBEN) in Houston, Texas. One of CBEN's primary areas of interest is the application of nanotechnology to the environment.

Vicki’s research explores how nanoscale particles interact with the environment and living systems. The work draws on synthetic chemistry for the preparation and control of novel nanophase systems as well as physical chemistry for the investigation of their unusual behavior. Her current projects draw on the unique and responsive behavior of nanoparticles to solve problems related to water purification and targeted cell death.

Dr. Colvin has a B.S. in Chemistry and Physics, from Stanford University, California, United States and a PhD from the University of California, Berkeley. She joined the board of the Schlumberger Foundation in March 2014 with excitement to support the foundation goals of furthering opportunities for women scientists, particularly in the area of the environment and fuel processes.