The Australian government has released 42 block areas available for oil and gas exploration offshore the Northern Territory, Western Australia, Victoria, and the Ashmore and Cartier Islands—offering the petroleum industry a variety of investment opportunities.

Legacy seismic data and imaging attempts have been unable to adequately resolve key events within the key reservoir intervals primarily due to complex overburden.

Browse Basin is a proven hydrocarbon province with major gas and condensate fields in the outer and central basin and minor oil discoveries on the basin's eastern margin. Primary exploration targets include Jurassic to Cretaceous basin floor fans with the recent Bratwurst-1 gas-condensate discovery in December 2019, illustrating significant remaining potential proximal to infrastructure.

A new high-end WesternGeco multiclient 3D workflow has been specifically designed to resolve the imaging challenges in legacy data due to complex overburden, aiding in unlocking previously inhibited reservoir intervals over both held and available acreage. This dataset will aid in derisking additional proximal fan and feeder systems to the southeast of the basin and in the identification of distal fan systems to the northwest. 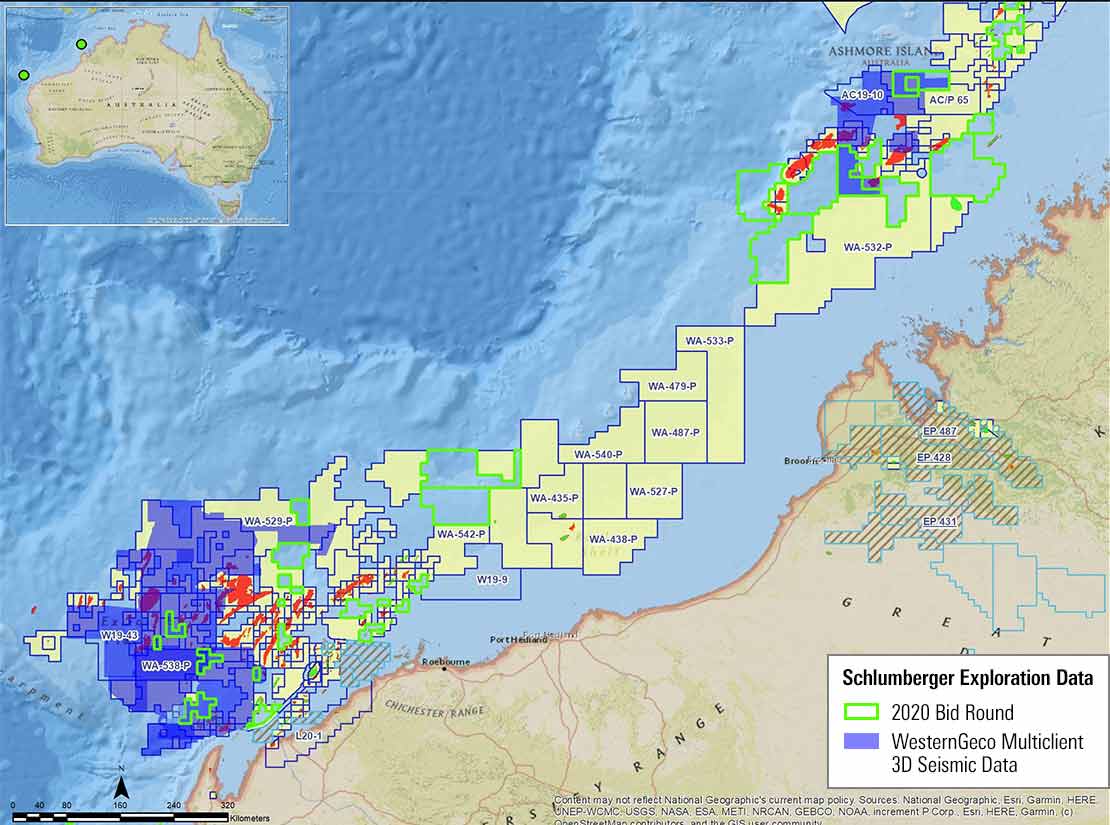 Available acreage blocks and multiclient 3D seismic data in both the Browse and Carnarvon basins.

Northern Carnarvon Basin is a prolific gas province with oil sweet spots. Despite significant resources identified to date, the basin remains as one of the largest yet-to-find basins in Australasia. Almost all hydrocarbon accumulations discovered to date are reservoired within Upper Triassic, Jurassic, and Lower Cretaceous sandstones and are sealed by the regional Cretaceous Muderong seal.

Despite gas being the main phase of hydrocarbons discovered over the Plateau, the recent liquid discoveries in the adjacent Bedout Subbasin allude to the potential for additional oil-prone petroleum systems in top of the main gas plays.

In partnership with TGS, WesternGeco is providing a Carnarvon multiclient 3D seismic volume, the first contiguous dataset extending from the inboard Mesozoic depocenters of the basin to the outboard Exmouth Plateau. As a result, seismic events and petroleum system elements can now be mapped seamlessly in depth across the basin for the first time.

Ongoing basin modeling and subsurface characterization studies aid to unlock play types across the basin, with deliverables due Q1 2021.