New insights for early development of a frontier area

Covering more than 65,000 km2, the Namibe Basin is one of the world’s largest remaining prospective frontier areas for oil and gas exploration. This southernmost basin along the West African salt margin has largely remained unexplored despite significant oil and gas activity in the neighboring Lower Congo and Kwanza Basins. To encourage exploration in the region, the Angola National Oil, Gas, and Biofuels Agency (ANPG) announced a 2019 public bid round covering approximately 54,000 km2 over blocks 11, 12, 13, 27, 28, 29, 41, 42, and 43 in the Namibe Basin and Block 10 in the Benguela Basin. The bid round represents an enormous opportunity to enter this frontier basin during its early stages of development.

WesternGeco offers an extensive collection of more than 40,000 km of multiclient seismic, potential fields, and petroleum systems modeling (PSM) data to help you evaluate the prospectivity of the Namibe Basin. Gravity and magnetics data acquired simultaneously with our seismic data provide regional tectonic information to help resolve structural uncertainty in the basin and identify the oceanic-continental boundary and areas of major volcanic activity. PSM of the region confirms that the Barremian-Neocomian and lower Aptian lacustrine shales with Upper Cretaceous source rocks are likely to be mature in the south of the basin. PSM also suggests that the timing of maturation with respect to reservoir development is favorable in many places. 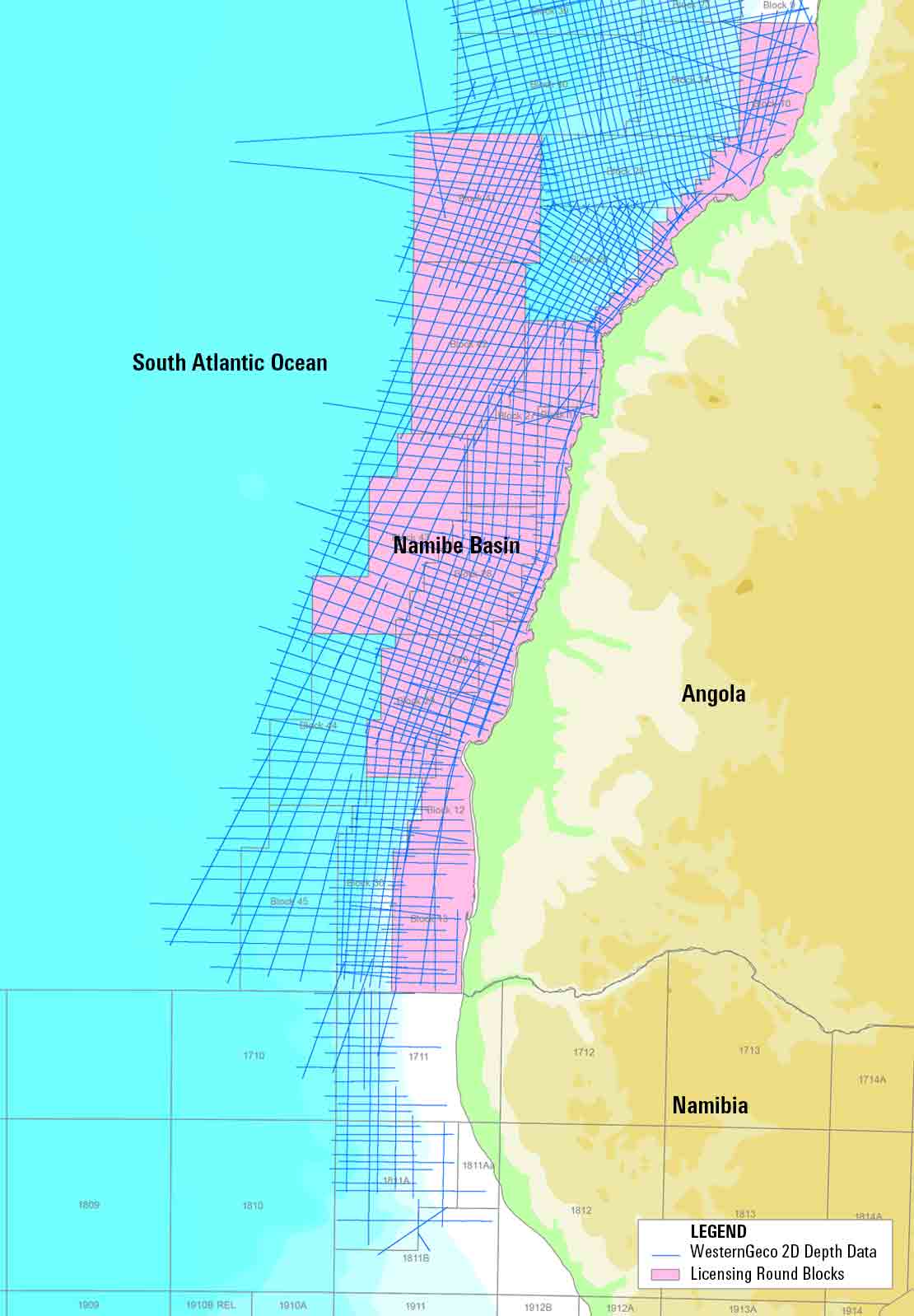 The bid round represents an enormous opportunity to enter this frontier basin during its early stages of development. 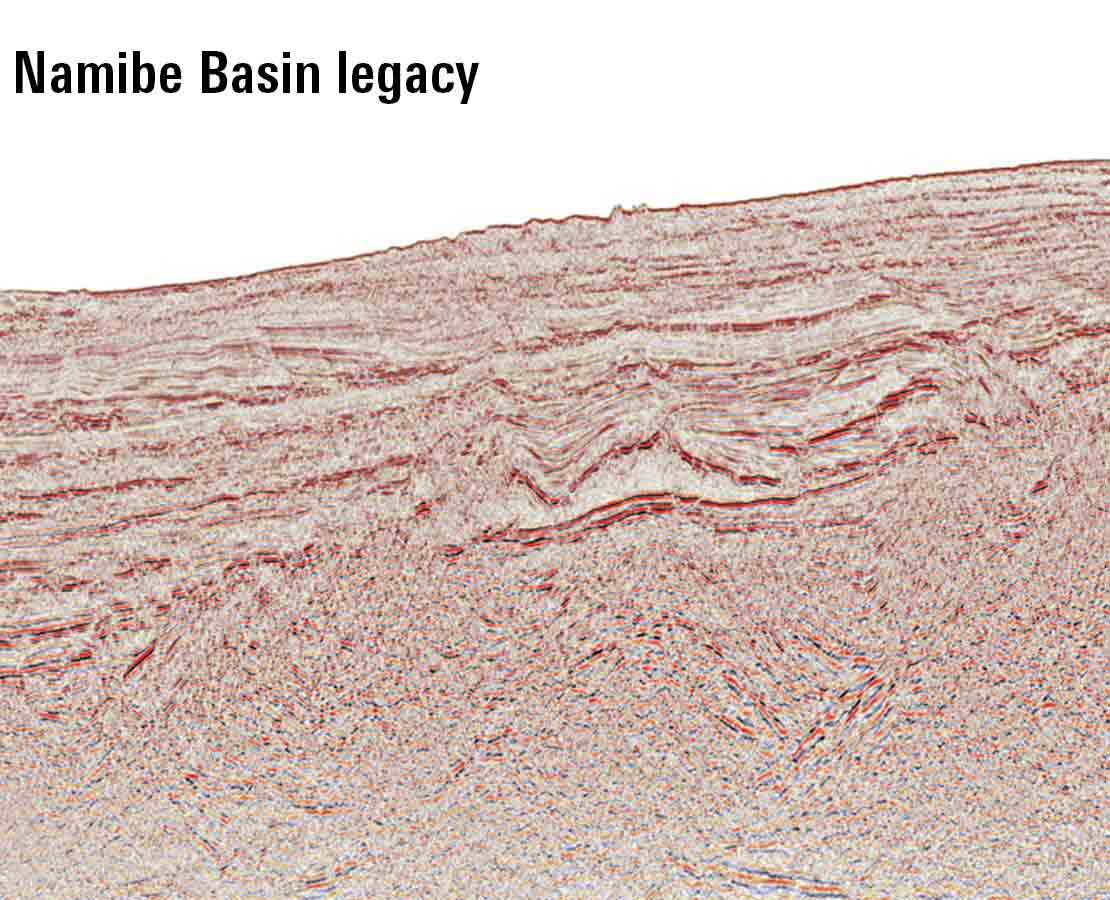 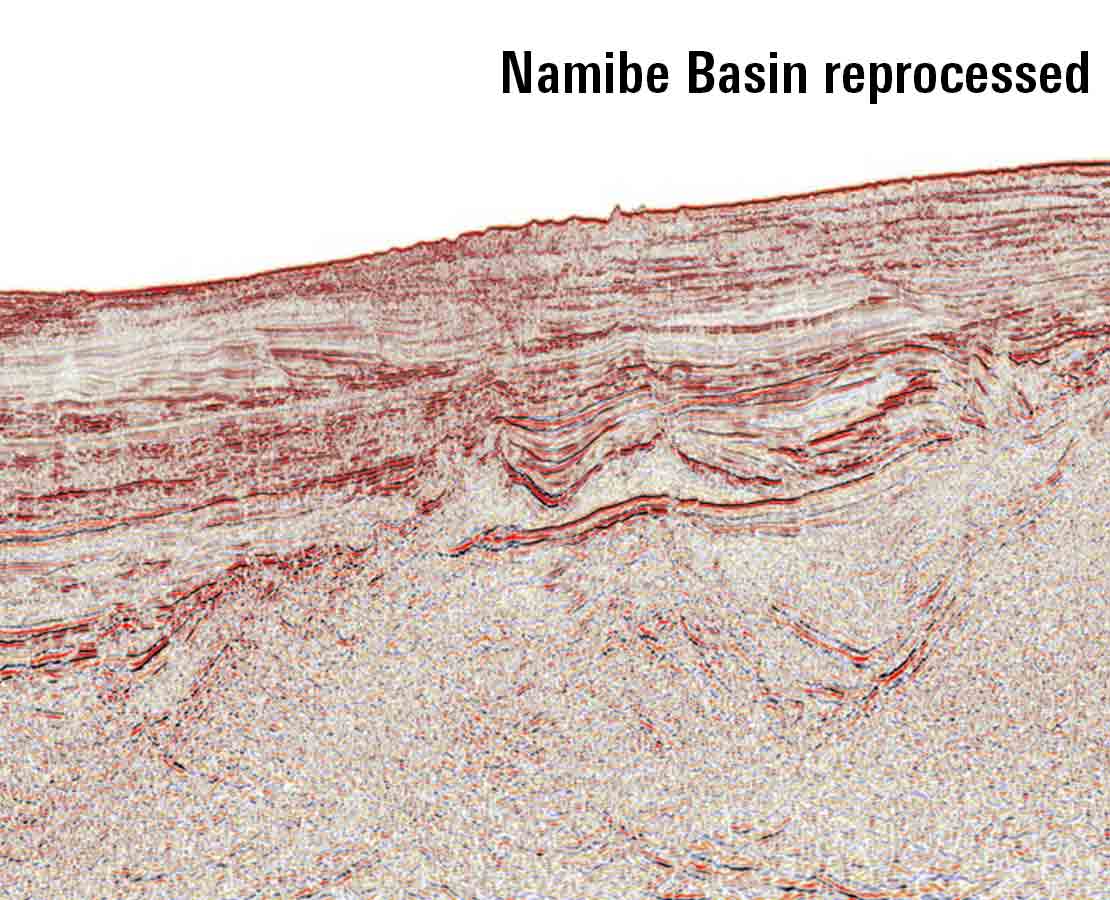 Our 19,500 km of 2D depth-imaged seismic data spans the entirety of the available licensing round blocks. We reprocessed the seismic data using a workflow that included pseudo 3D-grid-based tomography and a TTI anisotropic depth migration used together to reduce seismic misties and provide structurally consistent solutions over the basin.

Results include improved imaging both of reservoir formations containing Upper Cretaceous basin-floor fans and channels and of deep structures associated with Early Cretaceous rifting. The data contain evidence of several play types, ranging from Upper Cretaceous–Cenozoic turbidites to presalt microbialites analogous to those found in conjugate basins along the Brazil margin. Direct hydrocarbon indicators, including flat spots and gas chimneys, are also present in the seismic data, providing evidence of working petroleum systems throughout the Namibe Basin.

Explore your opportunities in a highly prospective frontier basin

The Namibe Basin represents an opportunity for early entry into a large prolific frontier basin. Our depth-migrated multiclient seismic and potential fields data combined with insights from our PSM will help you uncover the potential of this untapped resource, enabling you to accelerate hydrocarbon discovery.

Located next to the Cen-Turonian mature oil source rock, the Mid-Cretaceous sands display a strong AVO class III anomaly. A possible hydrocarbon contact indicated by the shutoff of amplitudes can also be seen on the pseudo-gradient stack.

The most relevant available data for bid rounds worldwide.

Get a competitive advantage for bid rounds in your prospect area

Gain access to the most relevant data available for bid rounds spanning the globe—from North America to the Middle East to Europe. Get the competitive advantage you need to select the best available prospects to meet the exploration goals of your operation.