Solution: Obtain and interpret high-resolution FMI fullbore formation microimager measurements to use with other detailed logging data to build a geological modeling for advanced petrotechnical evaluation.

A major reservoir found in multiple fields across southern Kuwait and the neutral zone separating that country from Saudi Arabia had been producing oil intermittently under natural depletion since its discovery in the 1960s.

In 2010, after production had been shut down for several years, the operator examined static reservoir pressure data for historical trends and noticed two things. First, even during prolonged periods with little-to-no production over the past decade, pressures still showed a significant decline. Second, reservoir pressure was rapidly approaching the bubble point. The next step appeared to be implementing waterflood operations to maintain pressure and improve ultimate recovery.

However, before trying to determine the requirements for water injection, the operator formed an internal team to investigate two possible causes of the anomalous pressure decline. One scenario was crossflow among reservoirs via the wells due to mechanical problems. The other was communication with nearby producing fields through a common regional aquifer.

The team built a simple material balance model, estimated crossflow volumes required to match historical pressures, and analyzed well data for any indications of crossflow. Not only was simulated crossflow production insufficient to account for observed pressure trends, but temperature surveys and geochemical analyses of oil from various zones yielded no evidence of crossflow.

To investigate the second scenario, the operator reviewed pressure and production data for the same reservoir across multiple, closely spaced fields. These data strongly suggested that communication through the aquifer could have caused local pressure to decline when production in a nearby field increased.

To conduct a more comprehensive and realistic study of the regional aquifer, the operator worked with a team of Schlumberger petrotechnical experts. From multiple data sources, Schlumberger created a static 100-by-100-km 3D structural model of the aquifer across four fields, including 15 horizons and five facies. Using computer-assisted history matching (CAHM) technology, they calibrated the regional model with historical static pressures.

In petrophysical logs, tar mats had been observed near the oil-water contact in two fields. These could act as significant barriers to fluid flow, and were added to the model. Petrophysical property distributions were adjusted using historical production to further constrain the model.

With limited control points, however, tar mat transmissibility and many aquifer properties remained uncertain. Thus, multiple versions of the model could match the same pressure and production data. To minimize uncertainties, 15 alternative history-matched realizations were achieved using the CAHM technology. 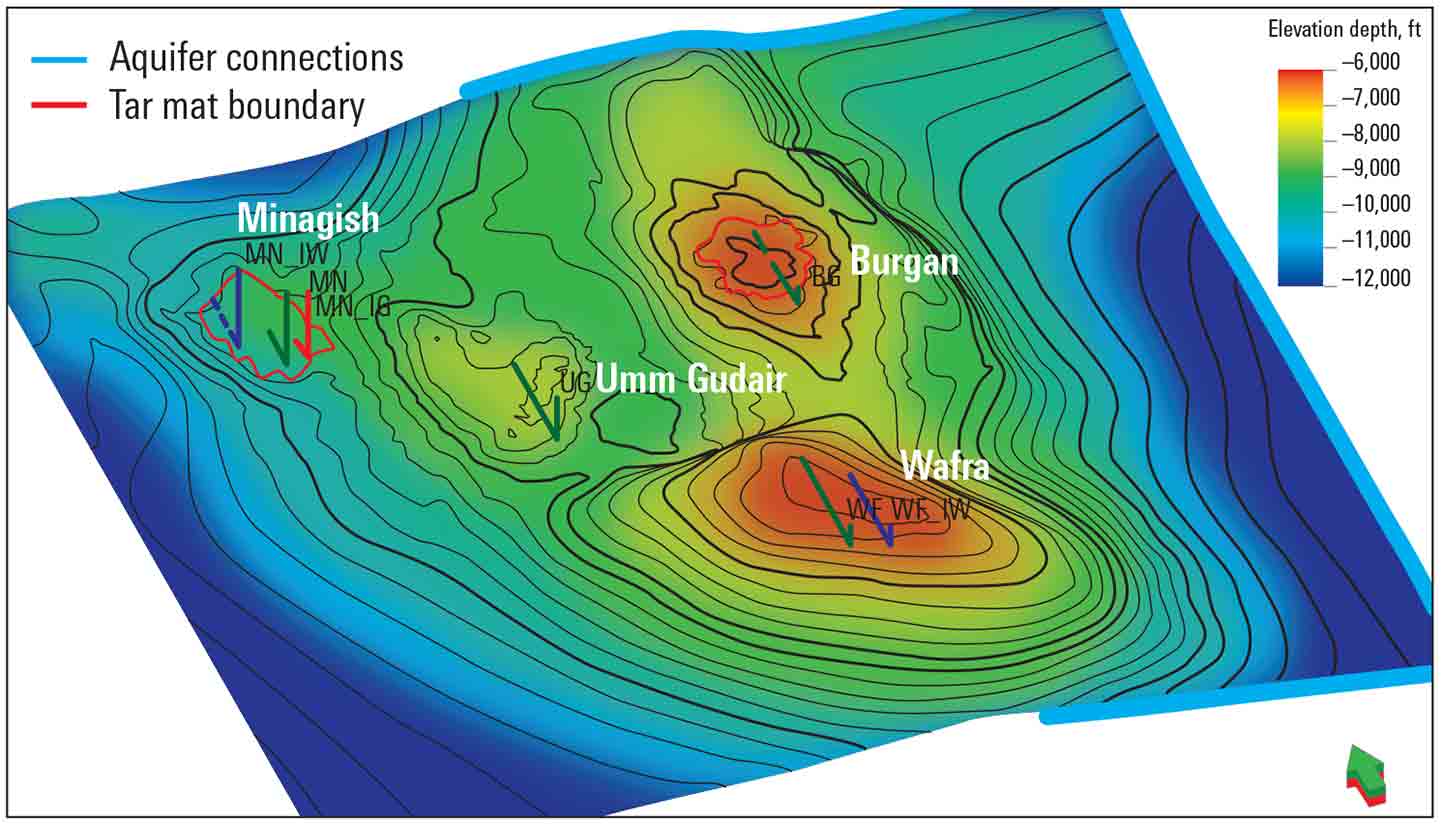 Tar mats (red outlines) observed in logs near the oil-water contact were incorporated in the dynamic aquifer model as potential barriers to fluid flow between the reservoir and the aquifer. Multiple history-matched realizations increased confidence in predictions.

Schlumberger experts built a 100-by-100-km 3D structural model of the regional aquifer across four fields, including 15 horizons and five facies. They calibrated the model with historical pressure and production data using CAHM technology.

The study confirmed that communication through the aquifer with nearby fields could, explain the anomalous pressure behavior.

With 15 model realizations to predict future pressure performance, the team found that under current operating conditions reservoir pressures would continue to decline for approximately 10 years, before flattening out. To assess the impact of water injection, the team simulated five simple prediction scenarios using two rates of injection at points above or below the tar mat, either producing at the current rate or temporarily suspending production. Each scenario was tested with three model realizations, using different multipliers for tar mat transmissibility.

As a result, the operator determined that water injection at rates about 50,000 bbl/d beyond the voidage replacement rate could maintain reservoir pressure above the bubble point. Predictions based on multiple models improved confidence. In the future, close monitoring of pressure during injection could reduce uncertainty about the tar mat's effect on interactions between the reservoir and the aquifer.

Better illuminate the subsurface in the most complex environments with high-quality 3D near-well structural models.