Located in western Siberia, the Salym oil fields are developed by Salym Petroleum Development (SPD)—a joint venture between Shell and Gazpromneft. Production began in 2004 and averages approximately 160,000 bbl/d from more than 500 wells, all of which use ESPs. In late 2011, SPD was struggling to meet its production requirements for the year, and in 2012, some of the wells were not achieving their low target bottomhole pressure (BHP) because of the D-series pumps' limitations.

The D-series pumps were too small to draw in enough fluid to meet BHP targets. They were also less productive overall owing to limits in maximum shaft strength, less shaft diameter, gas separator capacity, length relative to well dogleg severity, and flow rate (the target 1,000 m3/d was not possible). Additionally, to maximize production, the D-series pumps were operating at their technical limits, which reduced run life due to increased scale deposits, high-frequency operations, and asymmetric radial wear on the pump stages.

Schlumberger recommended deploying larger S-series pumps with Maximus ESP systems to draw in more fluid and increase production, improve system efficiency, and decrease electrical operating costs. Although they can be challenging to install, the advantages of the S-series pumps in comparison with the D-series pumps include more than twice the head development per stage, higher efficiency, and a wider operating range. The pumps would also enable SPD to reduce ESP string length by 50%, minimizing bending stress on the ESP system and increasing run life. The pump also has lower thermal, electrical, and mechanical system stresses and larger pump stages to minimize scale formation.

The tight clearance required that the motor lead extension be shielded by protectolizers, which are used for robust cable protection but have a larger OD than simple bands wrapped around the assembly. The maximum OD of the proposed ESP assembly was greater than the casing drift ID, so Schlumberger developed a specially modified protectolizer with a 5.91-in [150-mm] OD and clearance of 0.12 in [3.06 mm].

S-series pumps with Maximus ESP systems were successfully installed in seven oil wells and four water wells. Seven months of production resulted in reduced operating costs and incremental increase in oil production rates of more than 18,000 m3 due to the pumps' ability to draw in more fluid and consequently reduce BHP. All subsequent candidate wells have been installed with an S-series pump and Maximus system. 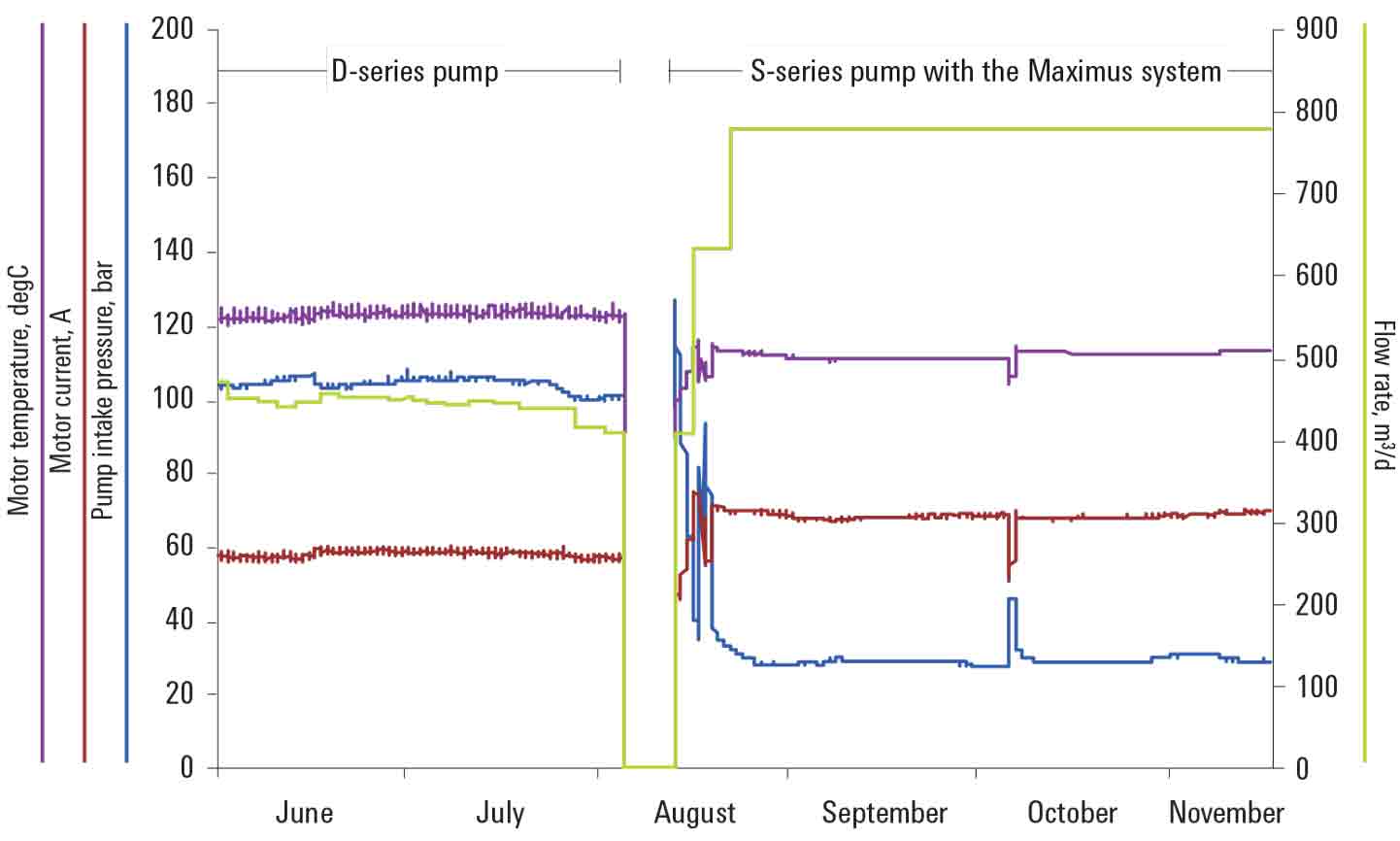