Challenge: Reduce rig time required to cut, pull, and circulate around 9 5/8-in casing known to have annular solids and gas on a deepwater slot recovery operation in a GOM brownfield.

Solution: Use the ProCISE casing cutting and recovery system to perform P&A operations in a single trip.

Plug and abandonment service frees and recovers casing in one trip

In a redevelopment and slot recovery operation in a subsea well in the mature Green Canyon field, Gulf of Mexico (GOM), an operator needed to P&A the nonproducing lower wellbore, sidetrack a new wellbore from the recovered slot, and use the existing subsea infrastructure to return the well to production. To maximize the economics of the slot recovery, the operator sought technology to reduce the number of trips needed to cut, circulate, and retrieve wellhead seals and casing.

Conventional methods require at least three trips or more if the casing cut and pull is unsuccessful after the first cut. Wellhead seals are recovered on the first trip. Then, the pipe cutter is run in on the second trip. On the third trip, the inline casing spear is run in, and the severed pipe is circulated up the annulus for recovery before the whipstock can be set.

For this slot recovery operation, Schlumberger recommended the ProCISE casing cutting and recovery system, which is an engineered assembly composed of multiple technologies designed to perform the P&A operation more efficiently. Prior to initiating a cut, the wellhead seals are pulled and mud displacement circulates out trapped annular gas. An inline casing spear is then engaged and an overpull check is performed to indicate a secure latch and to cut the casing in tension. Next, the WELL COMMANDER circulating tool from M-I SWACO, a Schlumberger company, is deactivated. Then circulation begins, transmitting rotation to the cutting assembly.

The multicycle pipe cutter, which allows multiple cuts per run, provides a contingency cutting system when multiple cut attempts are required, a common occurrence in P&A operations. In this well, imaging data showed settling of solids at the cutting location, which could require multiple cuts. The pipe cutter has three sets of blades that can perform multiple cuts in one trip, so if the casing cannot be freed on the first attempt, the cutting process can be repeated further up until the casing string is freed.

The pipe cutter is also equipped with a Flo-Tel downhole mechanical position indicator that provides pressure data at the surface for confirmation of a successful cut at each cutter position, eliminating the risk of pulling out of hole before the cutting operation is complete.

The unique cut, circulate, and pull service is composed of multiple technologies designed to perform P&A operations in a single run, eliminating two trips to surface. 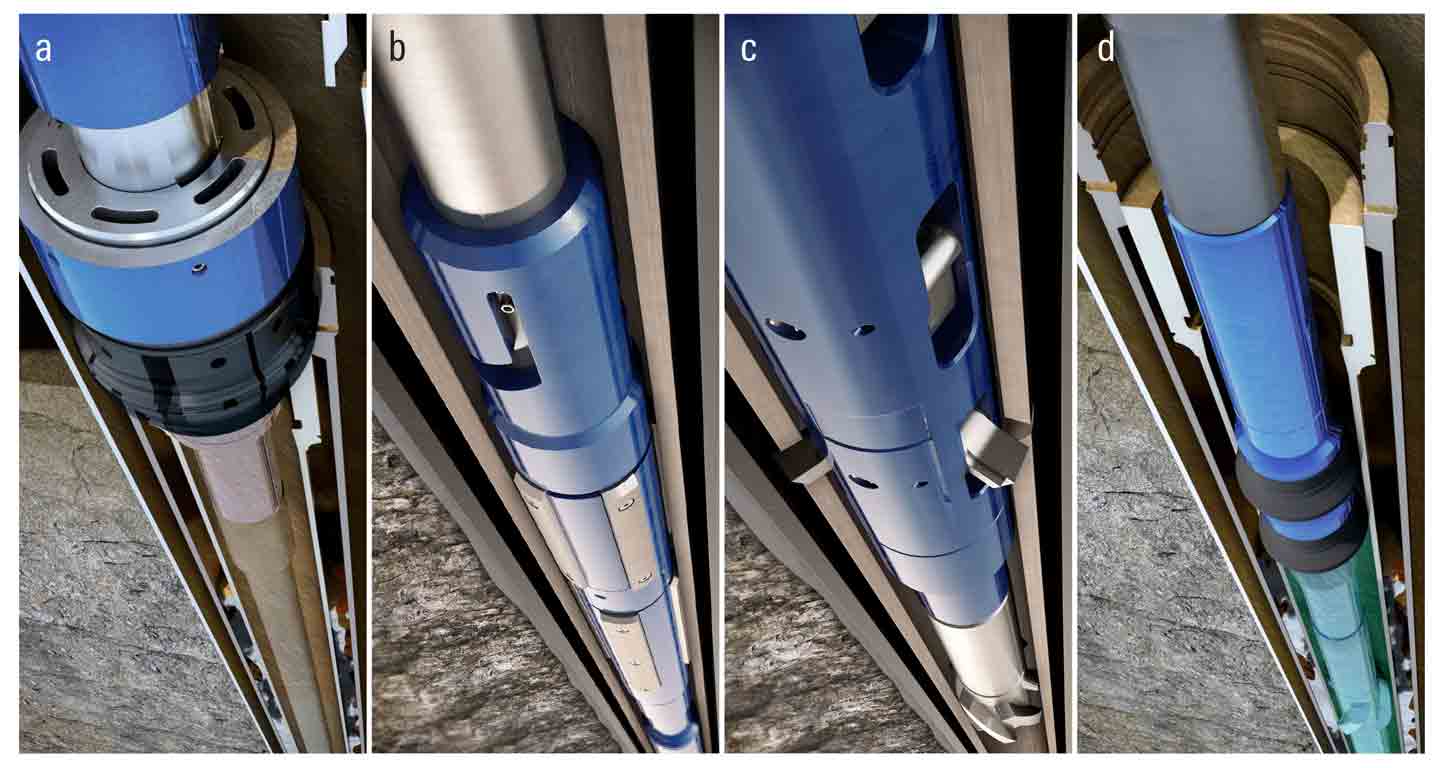 Prior to starting the cut, the wellhead seals are pulled (a) and the inline casing spear latches onto the casing (b). When the multicycle pipe cutter separates the casing string (c), high-pressure packoff seals the casing near the wellhead (d) to circulate out any cement, solids, and gas trapped in the annulus between the casing strings. Once the processes are complete, a trip out begins.

Once a successful cut is indicated, the latching spear is released, a unique high-pressure packoff is placed at the top of the cut casing string, and the inline casing spear is reengaged. Circulation is reestablished, and with the packoff set, returns come around the outside of the cut 9 5/8-in casing. This enables circulation of any cement, solids, and gas trapped in the annulus between the casing strings, all with established well control barriers in place. Once the cleanout circulation process is complete and the casing is confirmed to be free, the inline casing spear is unlatched and reengaged again so that the taper mill and multicycle pipe cutter are positioned inside the cut casing string. At this point, a trip out begins.

Successful cutting operation in one trip

The ProCISE casing cutting and recovery system enabled the operator to cut the casing free and recover the severed string at surface in a single trip while achieving an abandonment and subsequent kickoff depth of 5,005 ft. As a result, the operation was completed in one trip instead of three, eliminating two trips on the deepwater slot recovery. During the next phase of the slot recovery operation, the annulus was cleaned, and a TrackMaster CH cased hole whipstock system was set to exit the 13 3/8-in casing, sidetrack, and continue drilling to the new targeted production zone.