Operating in the Eagle Ford Shale, an operator has been working with Schlumberger to improve production from horizontal shale wells. New wells are completed in high-pressure, high-temperature (HPHT) areas with fracturing gradients of 0.85−0.95 psi/ft, TVDs of 12,000−13,500 ft, and bottomhole temperatures ranging from 300 to 345 degF. Typical completions are based on the plug-and-perf technique, with four to eight perforation clusters per interval isolated by bridge plugs.

An area of recent interest for the operator is the restimulation of old wells. The operator sought to accelerate and increase the estimated ultimate recovery (EUR) of oil and gas by reestablishing conductivity in old hydraulic fractures and stimulating new reservoir volume. This endeavor is gaining significant traction across the industry because the number of candidates for refracturing is increasing rapidly as the shale plays continue to age.

A key challenge for refracturing operations is effective stimulation along the length of the wells (4,000−6,000 ft). Since all perforations are open, mechanical aids such as bridge plugs cannot be used.

The candidate well, originally one of the field’s best oil producers, had been stimulated two years earlier with multiple fracturing stages. The refracturing operation included 13 fracturing stages, which were completed using an identical amount of proppant from the first stimulation campaign as well as the HiWAY flow-channel hydraulic fracturing technique. Composite pills were pumped between fracturing stages to enable temporary isolation of previously stimulated clusters. A shut-in was applied after placing each composite pill to monitor changes in fracturing gradient.

All 13 refracturing stages were pumped sequentially in 36 hours and without use of mechanical aids such as bridge plugs or inflatable packers.

values that are characteristic of previously untreated rock in the area. These features demonstrate the ability of the BroadBand Sequence service to reinvigorate and isolate depleted areas while enabling stimulation of undepleted areas of the lateral.

After refracturing, the well was put in production using a smaller choke (8⁄64 in) than the one used prior to 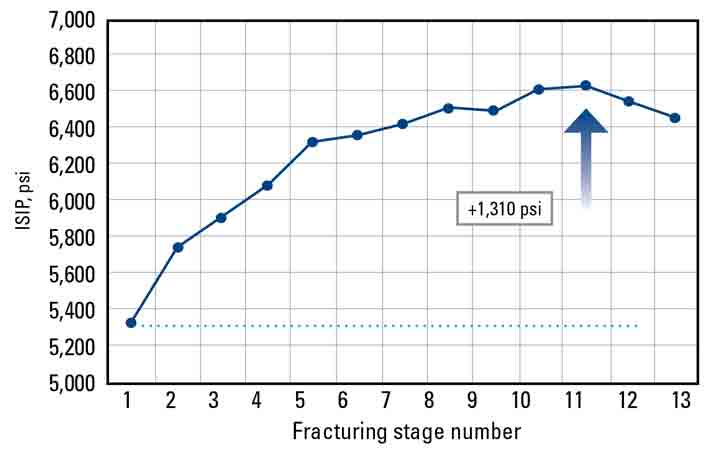 restimulation (10⁄64 in). Results over the first 45 days after restimulation show that, despite the increased restriction, oil and gas production rates doubled while tubing pressure increased fourfold. In addition, the well continues to retrieve fracturing fluid at a rate of 100 bbl/d, which means that the total fluid rate increased threefold.

Calculations for the well’s productivity index (PI), which take into account both rates and pressures to normalize production, indicate an increase in PI of more than 600% after the restimulation operation. These outstanding results demonstrate the effectiveness of the BroadBand Sequence fracturing service to boost oil and gas production from depleted horizontal shale wells. 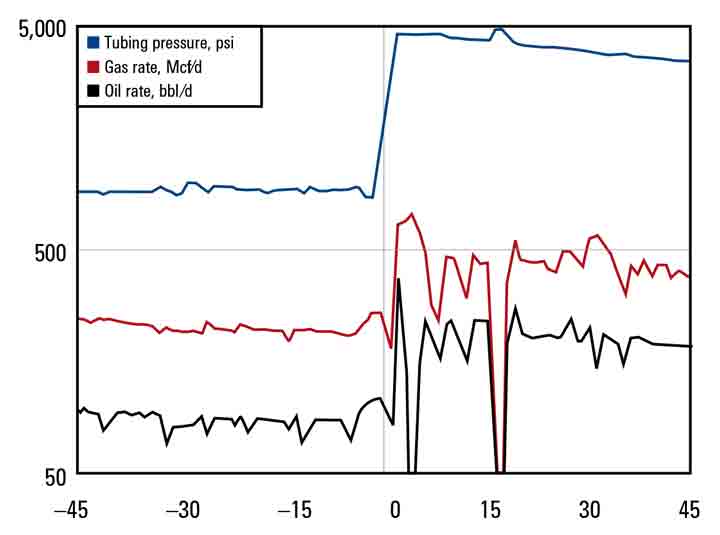 Results: Improved production based on average results over the first 45 days after refracturing: