Challenge: Formation damage during routine workover operations decreases production by up to 50%.

Solution: Use PROTECTOZONE viscous pill (VP) to temporarily isolate and protect the reservoir when working over wells.

Results: Increased production while decreasing the time and cost of workover operations.

In Ecuador, many reservoirs are low pressure (subhydrostatic) and highly permeable. The loss of completion fluid during workover operations frequently results in fines migration and the creation of emulsions.

In a study of 23 wells, PetroEcuador concluded that the loss of completion brine during workover operations damaged the reservoirs, and production decreased by an average of 30% after a well was worked over. It was also concluded that the use of fluid-loss control pills with sized solid particles, in many cases, damaged the reservoirs due to solids invading the matrix.

Production before and after workover operations.

A PROTECTOZONE VP pill is a solids-free, crosslinked polymer system that is spotted across low-pressure and/or highly permeable reservoirs to temporarily isolate and protect them from fluid invasion during a workover operation. Preventing the loss of completion fluid into the reservoir minimizes possible formation damage and loss of productivity. PROTECTOZONE VP pills have:

Production before and after workover operations after implementing PROTECTOZONE VP viscous pills. 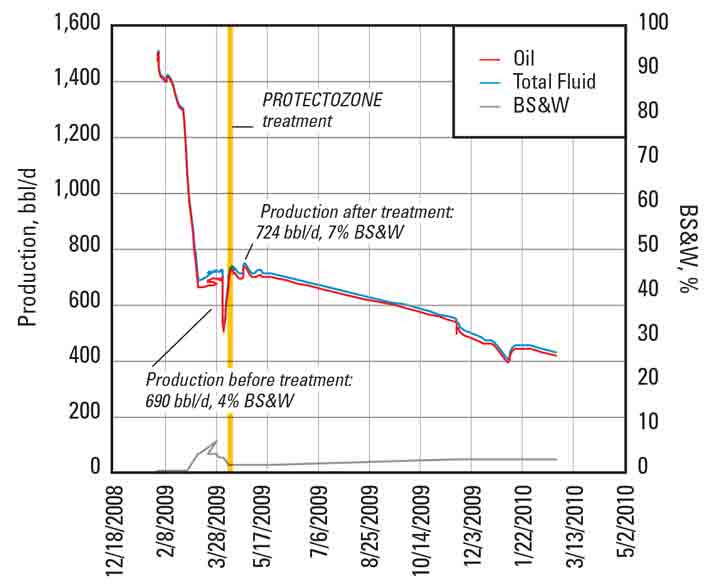 Anaconda 2 Well: PROTECTOZONE VP viscous pill across the perforated interval before pulling the tubing and completion to prevent losses.

The well Anaconda 02 was producing 690 bbl/d with 4% BS&W from the lower Napo T formation at a depth of +/- 10,000 ft, with high permeability (>200 mD), low pressure (<1,500 psi), and high temperature (<210 degF). When the well had to be worked over to repair a tubing-casing leak, a PROTECTOZONE VP viscous pill was spotted across the producing interval prior to pulling the tubing.

After the workover, which took 3 days, the well was put back on production and produced 724 bbl/d with 7% BS&W.

The well was producing 150 bbl/d with 2.5% BS&W from the Napo T formation at a depth of +/- 10,000 ft, with high permeability (>250 mD),low pressure (<2,000 psi), and high temperature (<210 degF), when an ESP failure required the well to be shut in and worked over. During the workover, the pay zone was reperforated and tested at 336 bbl/d with 27% BS&W. To avoid further losses of completion fluid to the formation while replacing the ESP, a PROTECTOZONE VP viscous pill was spotted across the perforated interval.

When the well was put back on production after the workover, which lasted 7 days, the well produced 520 bbl/d with 5% BS&W. Currently, after more than one year, production has stabilized at 459 bbl/d of fluid with no change in BS&W.

The added value of using PROTECTOZONE VP pills to effectively isolate and protect reservoirs during workover operations has been repeatedly demonstrated in various PetroEcuador fields. 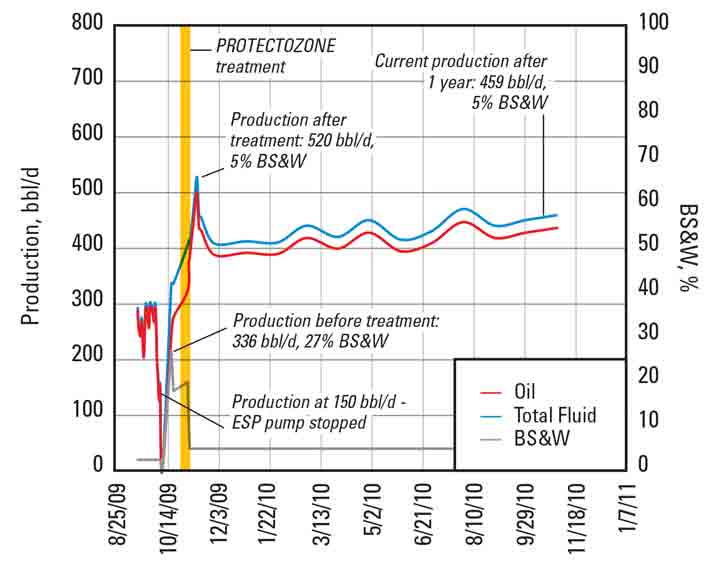 AUCA 40 Well: During the workover to repair the ESP, the pay zone was reperforated, giving 336 bbl/d at 27% BS&W with a jet pump during evaluation.
Products Used
AllSeal
Water and gas conformance service