The Holy Grail that operators in unconventional plays are striving to reach now is operational efficiency. Nonproductive time (NPT) due to equipment failure is a major barrier. In particular, the flow path between the hydraulic pump spread and the wellbore needs to be incident-free because a failure on this path significantly impacts delivery of hydraulic stimulation fluid from the perspective of cost overruns and increased safety risks.

As fracturing operations have grown to large-scale pro-portions, wellhead equipment, out of necessity, has been expected to withstand aggressively corrosive and abrasive service beyond original design parameters. Also, as shale plays mature, the visibility of every action affecting the ability of the pump spread to operate has been raised as a result of the drive to reduce cost by increasing operating efficiency.

With the majority of costs being incurred on the pump spread, any downtime associated with that large asset directly translates to high expense. One solution is for additional pump units to be deployed to offset the risk of a single pump failure. But there exists an inherent weakness between the rear of the pump manifold and the permanently installed wellhead. A failure in this flow path (Figure 1) can shut operations down until a repair is completed, resulting in disproportionate cost.

Frack trees are such an area in which failure of a frack valve can have a huge impact on operational efficiency and therefore cost. The reality of valve failure is much more than what operators typically calculate a valve repair to be. While a typical valve repair might take eight hours using a $2,500 ticket, the cost could actually reach about $14,500 per hour for a fracturing spread and an estimated total of $116,000. Plus, the entire stimulation operation has to be put on hold to fix the leaky valve.

Every aspect of the fracturing operation may be impacted as any valve failure can multiply exponentially. Not only might there be pumping costs that average $250,000 per day and possible services to repair the valve estimated at $2,500, but there are also costs for consultants, trailers, light plants, cranes, wireline, well control, water transfer crews, trash crews, man lifts, fork-lifts and downhole services that can be estimated at $100,000 per day. Then, should the frack tree need repair, about $350,000 at $14,500 per hour is wasted.

Considering the possibility of a catastrophic failure, blowouts or a fatality, a failure could result in a 48-hour to one-week shutdown. Costs could range from $700,000 to more than $2.4 million. 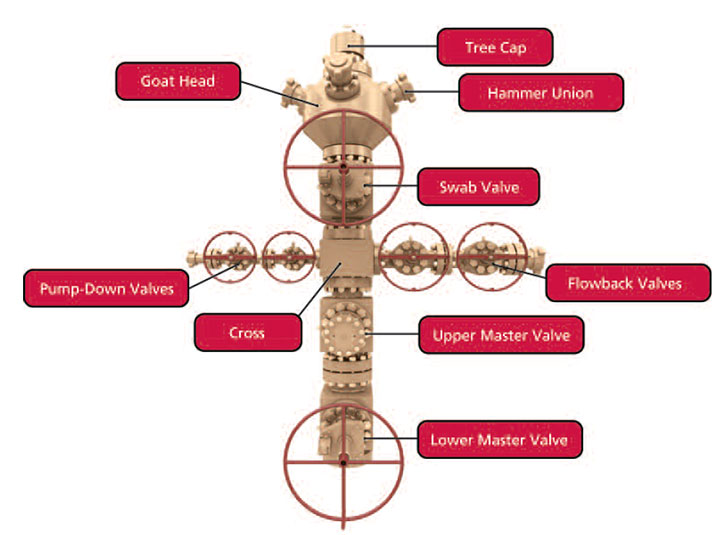 FIGURE 1. A common configuration of a fracturing tree demonstrates the flow path.

When planning the pad site, much thought is given to the layout using the various pieces of equipment needed to fracture the well(s). Because pads vary in dimension and overall size, the equipment configuration varies in accordance. But the flow path of the frack fluid stays the same. The flow begins with the hydraulic pumping trucks; these trucks supply pressure and volume to induce fracturing. High-pressure fluids flow through a manifold, allowing flow from multiple pump trucks to be combined. Fluids may move through a secondary manifold and into the frack tree or directly into the tree.

The use of a secondary manifold is becoming popular as operators cite increased efficiencies from the use of zipper fracking techniques. The system has multiple connection points, and each point has a potential for failure.

Valves used in the oil and gas industry are numerous and include gate, ball, plug, check, needle and venture types. API 6A gate valves' features, combined with adequate connections, pressure vessels and gate/seat/stem designs, yield a pressure shutoff device capable of containing high pressure as well as flow rates that can support production needs. Typically, a frack tree encounters the same drilling mud, cement and other drilling action as a production valve, but in addition it may be used for more than 40 stages of a hydraulic fracturing operation and then be used for flow-back and well testing processes. Hydraulic fracturing calls for sand-laden fluid at very high velocity for moderate time periods; flowback and well tests call for sand-laden liquids and gases at high velocities. These harsh conditions exacerbate failure mechanisms and concerns.

Loss of actuation: The accumulation of sand within the valve cavity results in loss of actuation function on equipment used for stimulation. Typically, a valve may encounter thousands of tons of sand per stage on a more than 40-stage operation. There is a chance that the sand can migrate into the valve cavity. Should the cavity become saturated with the sand, the valve will not operate correctly.

Increased mechanical wear: A valve used in hydraulic fracturing has a different operating frequency than that of a production valve. Fracturing valves are opened and closed several times before stimulation begins and then several more times during each stimulation stage, and they are reused as much as possible. Therefore, the time measured between the need to be reworked or scrapped is significantly shorter.

Frack tree: Figures 1 and 2 summarize common tree configurations and points of interest on fracturing trees. As mentioned earlier, failure of a frack valve can have a huge impact on operational efficiency. The frack valve is considered an essential component as it is the last line of defense in maintaining well control. Should the valve fail, the frack spread is shut down.

As insurance against frequent valve failure, some opera-tors are purchasing additional valves for their operations, resulting in additional cost. There are numerous steps toward system dependability that an equipment provider can take before equipment is installed in the well, and quality and engineering standards should be maintained throughout the equipment's life cycle.

FIGURE 2. Areas of concern of the fracturing tree include (A) where potentially aggressive erosion is possible due to it being a turbulent region with high velocity and impact angle concerns; (B) the bore inlet and ring groove; (C) the seal, gate and seat pocket where moderate erosion and/or corrosion on sealing surfaces can occur; and (D) the bonnet ring groove and stem seal area where corrosion on sealing surfaces and mechanical wear is possible.

There exists a broad philosophy of redundancy that has proven successful in most oil and gas operations; however, when applied to stimulation operations, it has resulted in excessive tree height and manifold complexity. The number of leak paths has increased, as has the mechanical load on connections. Operating height for trees and manifold systems has increased as a result of redundancy. The result has been the need to operate the equipment using scaffolding and worker-baskets. New technologies provide the safety of redundancy without the increase in height and may reduce or eliminate working-at-height requirements.

Operational efficiency is achievable through consistent low NPT, which can be realized through use of a systematic approach to design, manufacture and maintenance of the fracturing tree. Both the operator and the pumping service company benefit from lower operating costs, more efficient use of capital and safer operations.