Chesapeake sought a more efficient strategy to drill the 6⅛-in section of Oklahoma’s Colony Wash play after averaging more than six bits per horizontal lateral (roughly 5,000 ft). The abrasive formation causes severe wear with associated trips out of hole to replace the bit. The operator wanted to increase footage and reduce the number of trips while maintaining a reasonable ROP for lower overall well cost. The operator has been active in Washita County, Oklahoma, since 2009, so 6⅛-in lateral runs in the same play in offset wells are present for comparison.

To mitigate the abrasiveness for the Colony Wash formation and maintain an efficient cutting structure, Schlumberger recommended that Chesapeake deploy EnduroBlade 360 bits with 16-mm cutting elements from Smith Bits, a Schlumberger company. The IDEAS integrated dynamic design and analysis platform was used to determine the bit design best-suited to meet the operator’s lateral drilling needs.

In three wells in Chesapeake’s Colony Wash play operation, the EnduroBlade 360 bit increased footage and ROP compared with offset bit runs. On the first well in the series, the operator ran a 6⅛-in EnduroBlade 360 bit fitted with 16-mm cutting elements and drilled the greatest footage (2,885 ft) at the highest ROP (21.1 ft/h) in the lateral.

Following these results, Chesapeake chose to run the same bit design on its next well. The EnduroBlade 360 bit fitted with 16-mm cutting elements was initially run first, but was pulled green for a BHA change; the bit later drilled the lateral to TD. The bit that drilled to TD exhibited improved dull grading (1-0-WTTD) compared with bits run previously in the well that were pulled due to poor penetration rates.

On the third well, the EnduroBlade 360 bit with 16-mm cutting elements enabled Chesapeake to begin drilling the lateral at a record ROP for the Colony Wash play; the bit drilled 4,175 ft at a rate of 23.3 ft/h. These combined results informed the operator’s decision to continue running EnduroBlade 360 bits with 16-mm elements on future wells in the same formation. 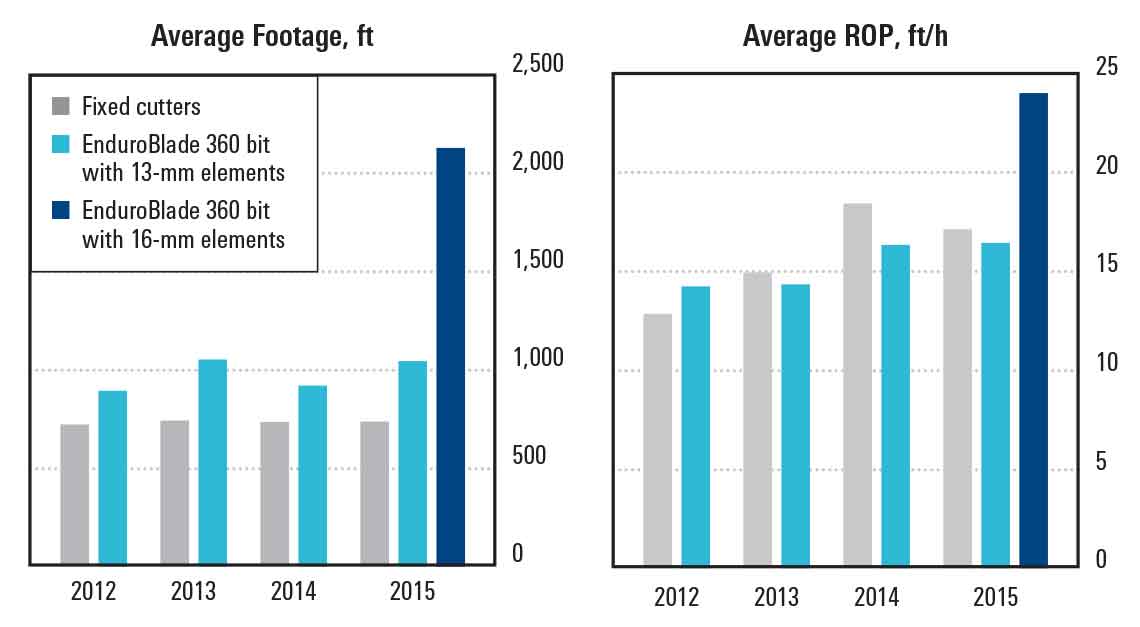