Challenge: Increase ROP in the lateral while maintaining steerability in the curve section of the second well, which is composed of unconventional shale.

Improve ROP and maintain steerability in lateral and curve sections

Shell was drilling four directional shale wells in Neuquén, Argentina that were characterized by low compressive strengths. Each one had a curve in the Quintuco formation with a lateral in the Vaca Muerta formation.

The two wells in the Sierras Blanca block were drilled using first-generation Spear shale-optimized steel-body PDC drill bits on a conventional downhole motor with the curve and lateral drilled separately.

The first well was drilled using an SDi513 Spear bit on a PowerDrive Archer high build rate RSS assembly with both sections completed by the same bit in one run. In the second well, the operator wanted to drill an 8.5-in interval from surface casing at 2,668 m to a TD of 4,078 m in one run. To achieve that goal, the operator had to improve ROP in the lateral and maintain bit steerability in the curve.

To maximize bit performance, Schlumberger recommended the next-generation Spear SDi516 bit with five blades and 16-mm cutters. The larger and more aggressive cutters allowed for takeoff in the lateral and a smooth toolface control for the curve. In addition, the bit was designed using a cutter and gauge configuration optimized for the PowerDrive Archer RSS. The customized design ensured smooth sliding and improved rotating capabilities while building the curve and maximizing ROP in the lateral.

Furthermore, the SDi516 differentiates itself from its predecessor with two enhanced hydraulic features: shale evacuation channels and a super bullet body design. These features significantly reduce drill time by combating factors that slow down operations such as long lateral sections and low hydraulic horsepower caused by poor pumping capabilities.

The five-bladed Spear SDi516 PDC bit fitted with 16-mm cutters features shale evacuation channels and a super bullet body design that enabled the operator to take off in the lateral with smooth toolface control for the curve. 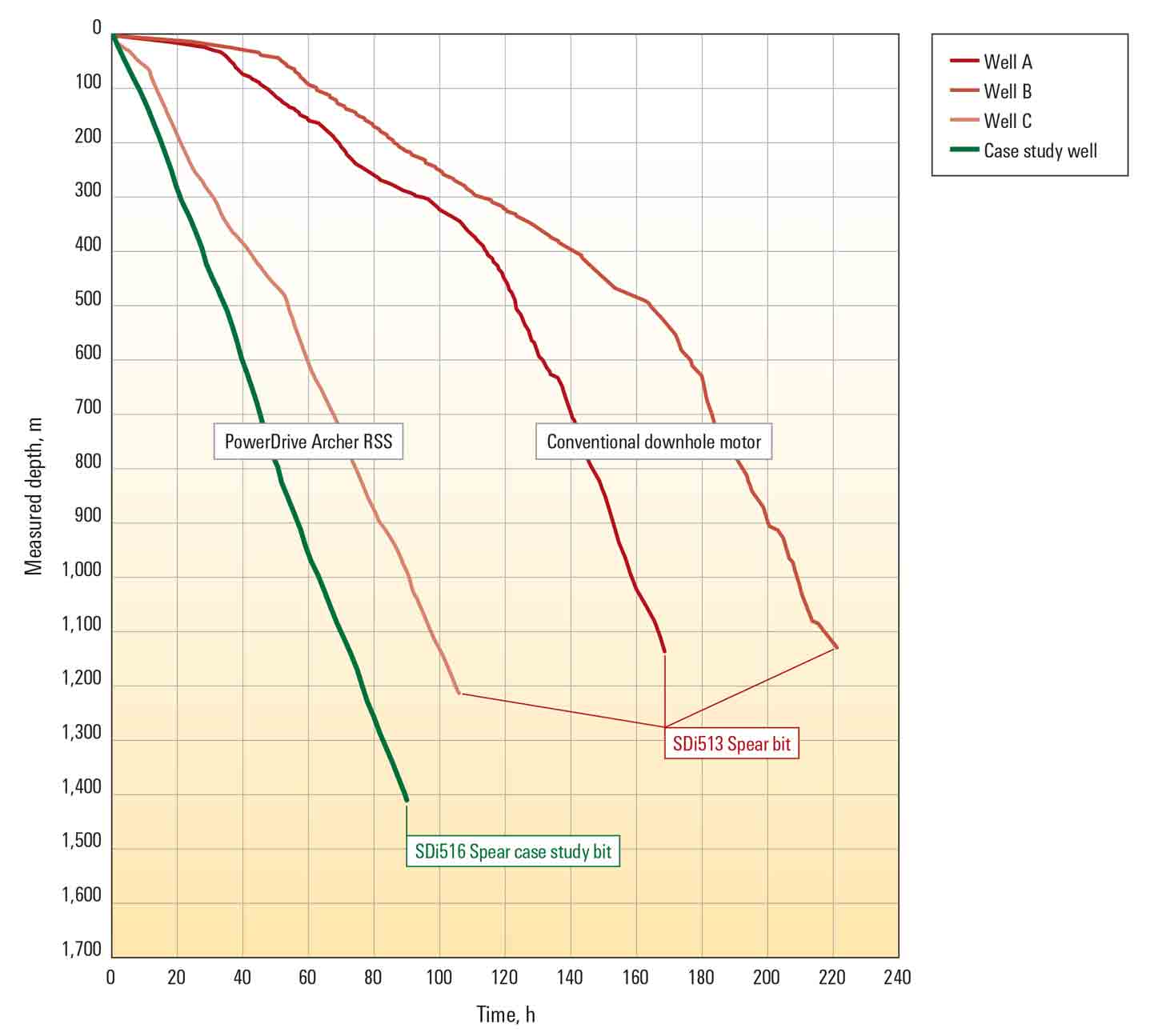 Shell drilled two wells in Sierras Blanca block using an SDi513 bit on a conventional downhole motor with the curve and lateral sections drilled separately. The first well in the Aguila Mora block was drilled using an SDi513 bit on a PowerDrive RSS with both sections completed in one run. The bit was replaced with an SDi516 bit in the second well, improving ROP by 8.5% when compared with the block’s offset well.

Drill complex curves and trajectories and sidetrack without making an extra trip.