Ascent Resources wanted to achieve consistent single bit runs through a specific interval comprising 7,300 ft of interbedded shale, limestone, dolomite, and sandstone. The strategy was to identify those points in the interval prone to causing damage to 12 1/4-in TCI bits. Additionally, the interval would be drilled using compressed air rather than liquid mud for 90 to 100 drilling h. Air is a compressible fluid, and its density varies with temperature. Motor speed also varies with temperature and can estimated by drillers only at the surface because there are no live temperature sensors downhole. Consequently, the revolutions-per-gallon motor specification is rendered unreliable during air runs, requiring verifying positive displacement motor (PDM) output calculations against actual data, which needed to include at-the-bit temperature and rpm at differing stages of the run.

The stages specified for study were at the beginning of connection to find out if the initial rpm was higher when starting pumps and subsequently at each formation transition. The formation comprised limestone, dolomite, and sandstone.

Schlumberger's Synapse performance insights and optimization service was specifically developed to log at-bit data. Placed inside the pin of Smith Bits PDC and roller cone bits, the tool measures three-axis accelerations, torsional vibration, and rpm. It provides postrun data to evaluate drilling system performance. And the data is processed in a timely manner and customized to provide an improved understanding of downhole dynamics and identify performance limiters for future wells.

The Synapse service ran on the same bit type in three different wells, each with similar formations, interval lengths of about 7,300 ft, BHAs, and drilling profiles. All runs used a 0.07 revolutions-per-gallon motor, except one run that incorporated a high-torque power section.

The project team, consisting of both Ascent Resources and Schlumberger engineers, identified optimal parameters that could reduce torsional accelerations at the bit, particularly in some geological transitions.

Downhole and surface data and formation tops were used to evaluate changes in drilling dynamics throughout the different geologies—including downhole vibrations and bit rpm. This included using several visualizations and data plots by formation for the three runs to investigate specific problem areas and geologies.

The analysis resulted in recommendations to slow drilling speed at certain formation transitions where the shock and vibration were high, as in the case of the Newberg Formation, which is 200 ft above the Lockport and 200 ft earlier than prior points where rpm was reduced. Quick analysis delivery enabled Ascent Resources to make adjustments to ensure subsequent runs in the pad were more optimized. 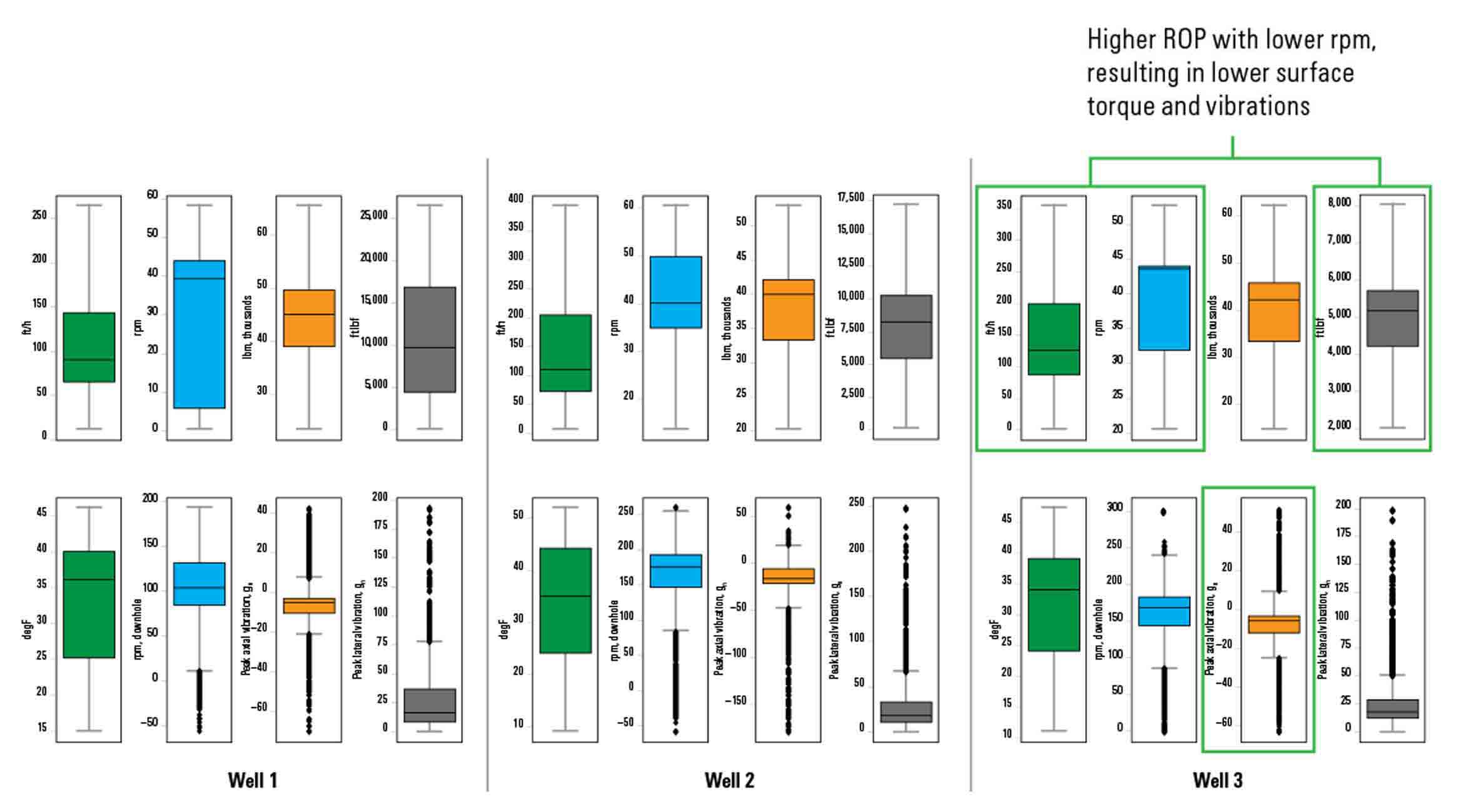 Ascent Resources deployed Synapse performance insights and optimization service while drilling several thousand feet through an interbedded formation. The at-bit tool was placed inside a 12 1/4-in TCI bit during the drilling phase that used compressed air as drilling fluid for 90 to 100 h. This enabled the operator to better understand motor outputs when using air. Combining the Synapse service downhole data with surface and formation data over several runs revealed new drilling parameters to improve efficiency and performance while reducing bit damage.