Challenge: Reduce operation time and costs to optimally stimulate oil production from a multilateral well in a carbonate formation with hard-to-recover reserves because of anomalies in viscosity and mobility

Integrated Operation Reduces Costs for Multilateral Stimulation by 24% for Tatnefteotdacha

In 2016, Tatnefteotdacha drilled two horizontal four-lateral wells in the Bashkirian Formation of the Stepnoozerskoe oil field in Russia. Each well had an openhole length of approximately 1,250 m [4,100 ft]. Horizontal and multilateral wells in this field can produce commercial volumes of oil without stimulation, but matrix acid stimulation significantly increases economic efficiency.

The oil viscosity at reservoir temperature varies from 244 to 581 cP with an average value of 383 cP. The oil also has viscosity and mobility anomalies that make it a non-Newtonian fluid at reservoir temperature. Its behavior is attributed to a spatial structure of asphaltene particles. In addition, oil viscosity increases significantly with depth; the oil becomes nonmobile and solid at the level of water-oil contact.

For single-bore horizontal wells in the field, Tatnefteotdacha contracted with one local turnkey company for acid systems, pumping services, and CT. For the first multilateral well (Well 1), Tatnefteotdacha asked Schlumberger to deploy its Discovery MLT system to selectively enter each lateral and enable third-party matrix acid treatments. Discovery MLT system uses real-time feedback to rapidly find and enter a targeted lateral. It then memorizes the window orientation and monitors BHA orientation, facilitating the location of other laterals. Even with efficient lateral entry, the stimulation operation was lengthy, which increased its cost. Furthermore, although the operation increased production initially, production began to decline after 6 months. 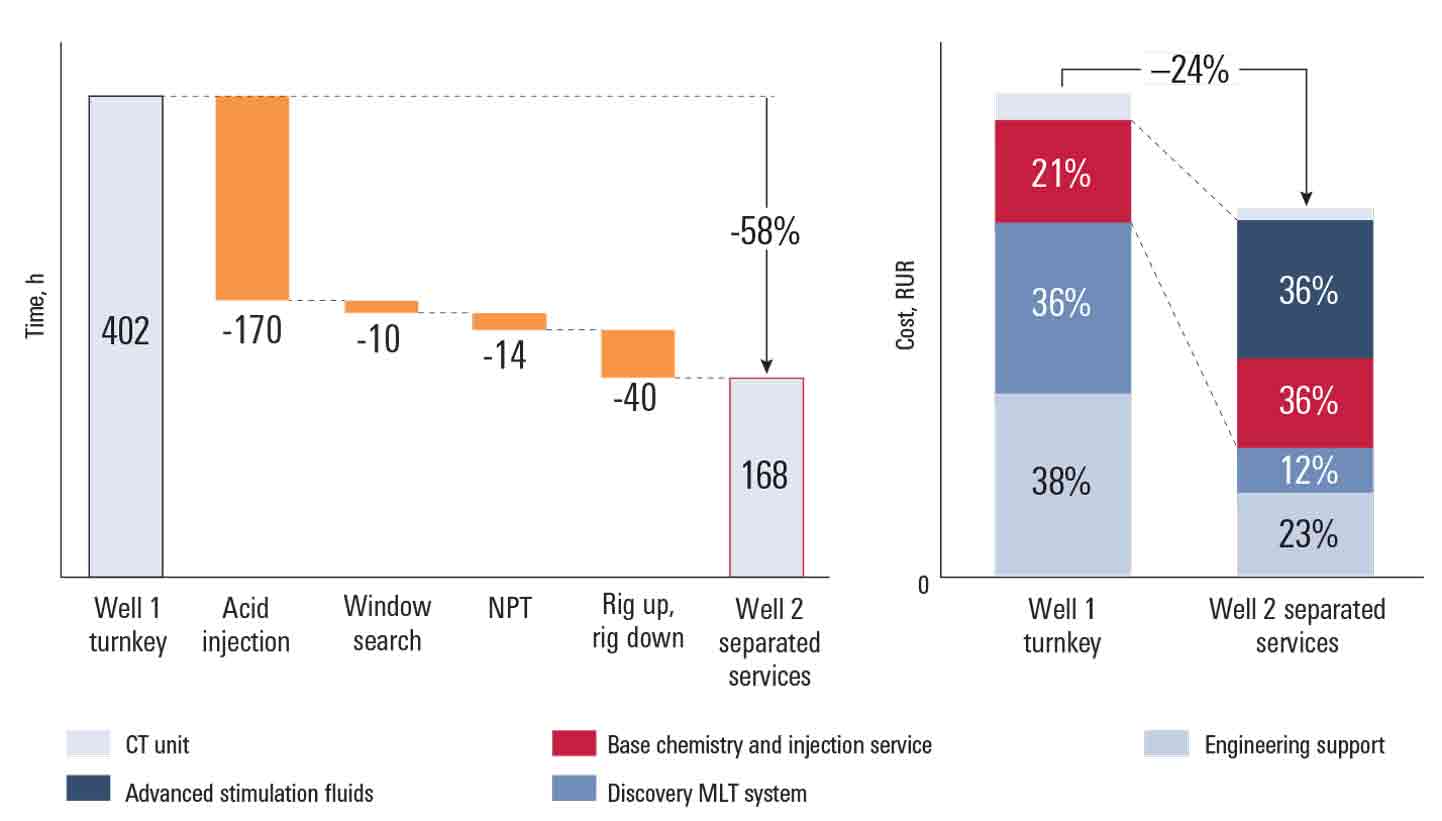 After prejob testing with operator-supplied field cores, hydrochloric acid (HCl), reservoir oil, and water, engineers selected 17% HCl (adapted hydrochloric acid) as the base fluid for an acid matrix treatment. Because the well was already producing, engineers recommended a prewash with a universal solvent to dissolve hydrocarbon film and minimize risk of creating unwanted emulsions. Dynamic acid dispersion, an emulsified acid-solvent system, was then pumped to solve the dual problem: to dissolve the heavy oil components and increase acid contact with the calcite rock.

To improve stimulation uniformity across the heterogeneous targeted intervals, nonpolymer VDA acid was used to divert fluids away from high-permeability areas. As the VDA acid reacts with the rock, its viscosity increases, temporarily blocking the permeability. Later, the system degrades in contact with a solvent or produced hydrocarbons.

For overall stimulation design, engineers recommended targeting intervals with the best reservoir properties to maximize productivity improvement and operational efficiency without wasting time and acid on low-potential rock. This targeting, in combination with the Discovery MLT system, was expected to considerably reduce treatment time and improve efficiency.

Tatnefteotdacha supervised and organized the work on Well 2, which began with an â€œacid treatment on paperâ€ meeting where the diverse participants resolved issues of equipment compatibility, business culture, and personnel interactions.

After the targeted stimulation operation, Well 2 liquids production increased by 2.5 times over its unstimulated production. Productivity index of Wells 1 and 2 were calculated at 0.24 m3/d/bar and 0.27 m3/d/bar, respectively, or about 12% higher for Well 2.

Well 1 production began a steep decline 6 months after treatment but continued to produce at low levels for at least 12 months. In Well 2 the production improvement continued with no decline after more than 9 months.

In terms of costs, the targeted treatment in Well 2 saved 234 hours (58%) as compared with the treatment in Well 1. In addition, although the treatment in the Well 2 operation used a specialty acid system, the targeted design saved 24% on the overall job cost compared with the overall cost of the Well 1 treatment. This work proved the effectiveness of the Discovery MLT system and Schlumberger technology, enabling an extension of the stimulation campaign for another year. In 2017, Schlumberger stimulated 13 wells, 9 of them multilaterals. Tatnefteodacha estimated the total campaign cost savings exceeded USD 1.6 million.