Challenge: Perforate a 3,000-ft horizontal well with 7-in casing in carbonate reservoir with high concentrations of toxic H2S

An operator was completing a gas well in a field that has particularly challenging characteristics, including long horizontal laterals and high concentrations of H2S. The operator wished to perforate a 3,000-ft interval in the field with a technique that could maximize productivity while ensuring safer operations in the high-H2S reservoir.

An existing openhole lateral in communication further added to this job's complexity; the presence of the openhole lateral prevented using any pressure pulses down the annulus side to actuate tools, including a TCP firing head. Also, care is required to monitor fluid levels at surface while the guns fill after shooting because a lowered fluid level decreases hydrostatic pressure, which could result in well-control issues.

After consulting with the operator about its perforation and production goals, Schlumberger ran SPAN Schlumberger perforating analysis to predict the performance of gun systems at downhole conditions. PURE system planning software was used to determine the optimal shot density of PowerJet charges and the PURE system. It was recommended to use a fit-for-purpose TCP system that combined a 4 1/2-in, 72° phase gun loaded with PowerJet deep-penetrating shaped charges at approximately 4.84 shots per foot (spf) and PURE system charges at approximately 0.15 spf. The PowerJet charges’ shot density was close to maximum, an important requirement in this job.

Over 7 days, 143 guns were loaded at a Schlumberger gun shop and transported to the wellsite. After assembly, the guns were run in hole as a drillpipe-conveyed TCP system with a pressure-operated valve, keeping the tubing isolated until after shooting. Using a hydraulic-delay firing head, every gun fired correctly. Extreme care was taken to condition the mud thoroughly to remove any traces of H2S while the guns were retrieved.

After the guns were retrieved, a trip was made with debris catchers and magnets to recover any debris left in the well from the perforating process. A total of 48.5 lbm [22 kg] of debris was recovered, some of which is perforation-related debris. This amount was less than predicted; the low debris volume may be a side benefit of the PURE system design, which kept much of the perforating debris inside the gun string to then be retrieved at surface.

This large and complex TCP job was executed precisely as planned with two perforating jobs successfully completed using the PowerJet charges and PURE system. The 3,000-ft interval was shot in a single trip. All shots fired successfully with minimal gun debris left in the well after shooting. During gun retrieval, special care was taken to ensure no residual H2S remained in the fluid column, and several circulation trips were made while monitoring for H2S at the pits. The operator was pleased with the results of the operation—the largest 4 1/2-in 5 spf TCP job completed in the region. 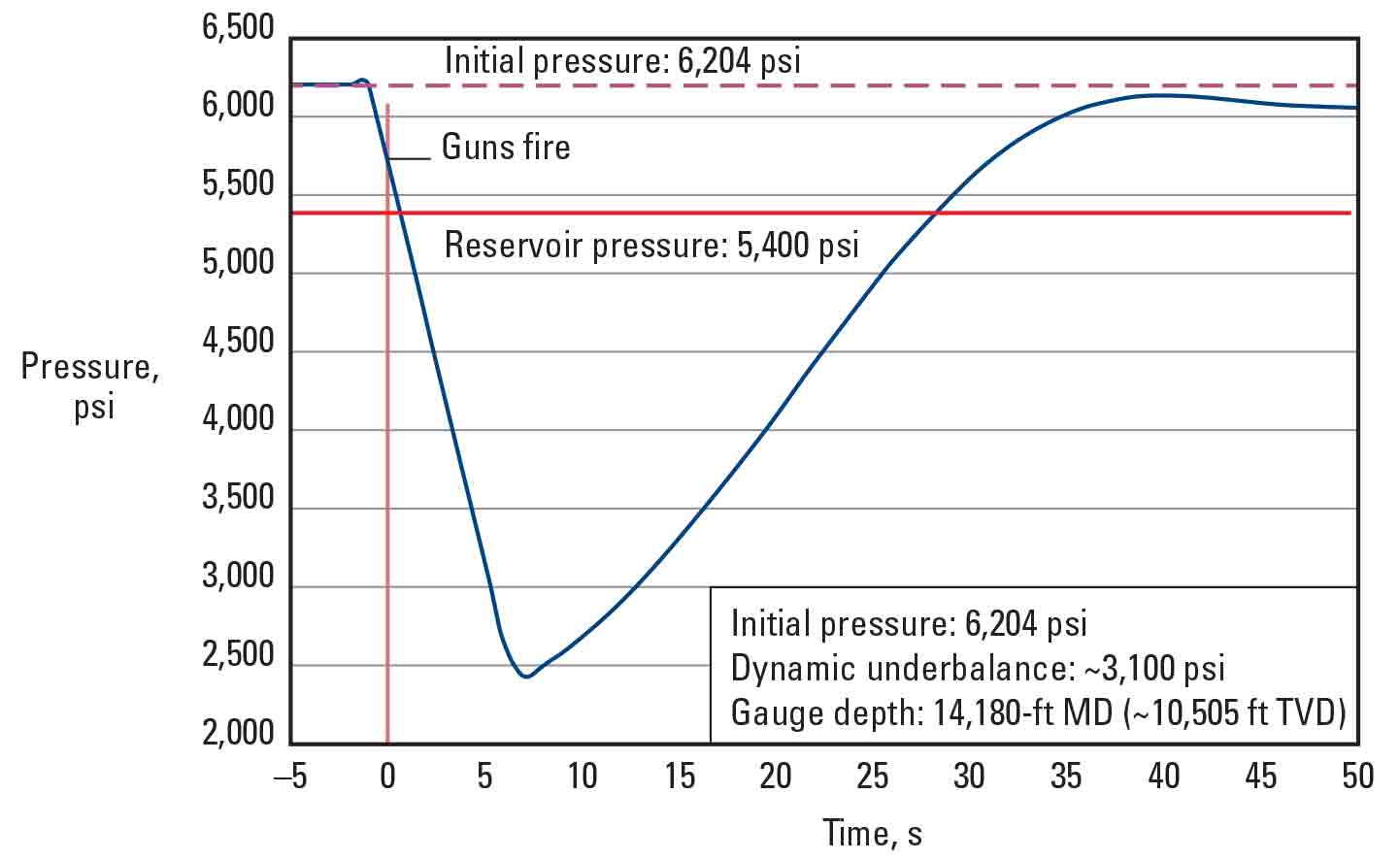 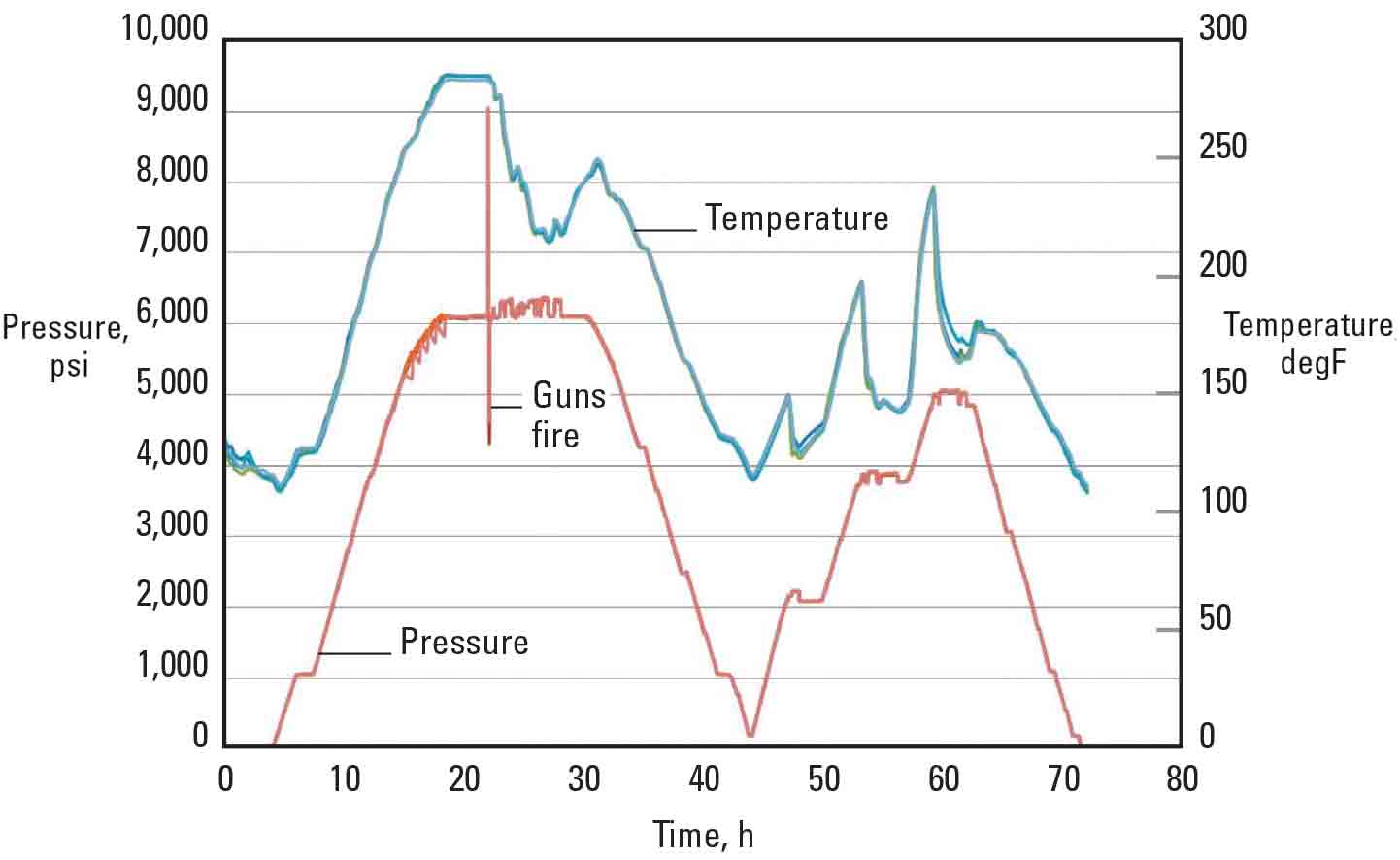 Pressure and temperature record for the entire test duration, including efforts to clean the well of H2S after shooting. The dynamic underbalance surge cleaned the perforation tunnels for better productivity.
Products Used
PURE
Clean perforations system