Optiq Seismic solution acquires zero-offset, offset, walkway, and walkaround VSPs in a fraction of the time of conventional geophones

The operator wanted to obtain zero-offset, offset, walkaway, and walkaround VSPs in a vertical onshore well using Schlumberger’s Optiq Seismic fiber-optic borehole seismic solution to assess its efficiency and effectiveness and qualify its use for offshore operations.

The Optiq Seismic solution brings new efficiency to borehole seismic operations. The solution’s optical interrogator unit at surface is connected to any optical-fiber cable deployed in a well, from hybrid wireline logging cable to production tubing with fiber installed or optical fiber permanently cemented behind casing.

Schlumberger performed intensive, advanced surveys in the vertical well to prove the Optiq Seismic solution’s efficiency and assess the data quality from various VSP configurations. The borehole seismic acquisition was separated into two phases. Phase 1 would be performed during openhole wireline logging using conventional downhole geophone accelerometers and the ultrastrength Optiq TuffLINE torque-balanced fiber-optic wireline conveyance, a seven-conductor heptacable with a single-mode optical fiber. After departure of the drilling rig, Phase 2 would include installation of a single, hybrid fiber-optic and electrical cable—part of the Optiq Schlumberger fiber-optic solutions family—along the intelligent completions.

During Phase 1, one rig-source VSP and four offset VSPs (in cardinal directions, Fig. 1) were recorded on eight downhole geophone receivers deployed using Optiq TuffLINE conveyance and five 65,000-lbm vibroseis trucks (Fig. 2). The rig source position was located 100 m from the wellhead at 180° north. The four offset source locations were located 1,500 m from the wellhead on the north, east, south, and west directions. One vibroseis truck was used for each location operating in flip-flop mode to increase productivity.

During Phase 2, one rig-source, four offset, two walkaround, and four walkaway VSPs were recorded using the hybrid fiber-optic and electrical cable permanently installed with the completion down to the pressure-temperature gauge. The cable was clamped at the tubing joints, approximately every 10 m. 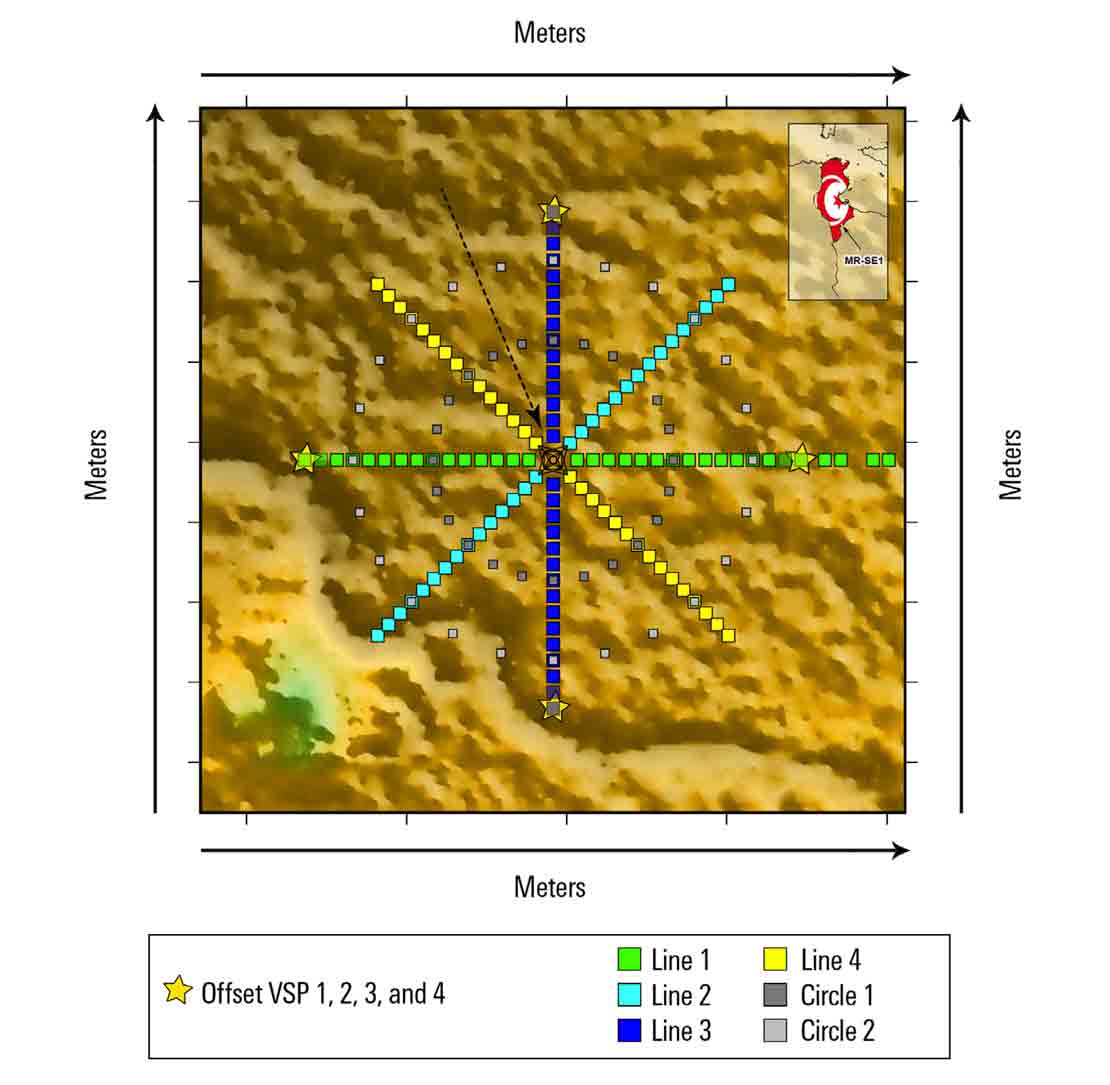 Figure 1. Map of the vibroseis shot positions in the vertical well. The stars, squares, and circles represent the offset, walkaway, and walkaround VSP shot positions, respectively. 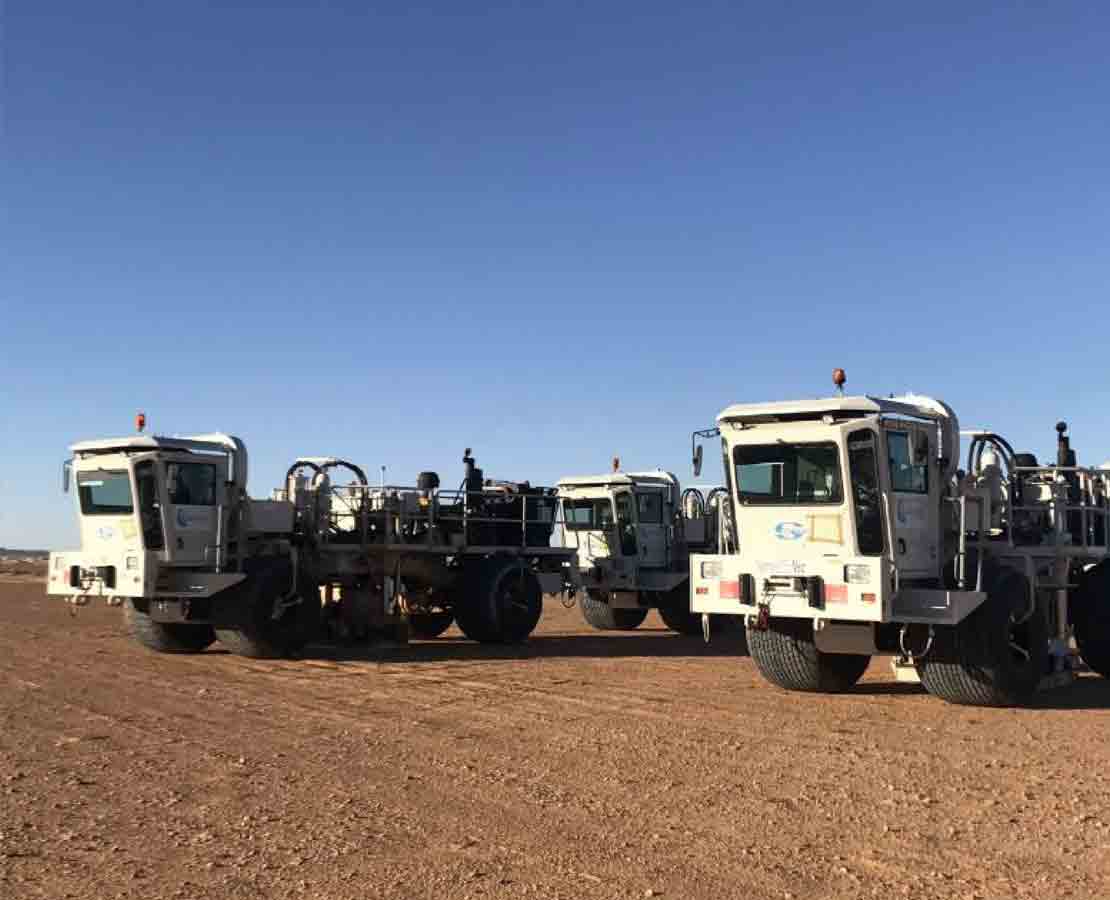 The same vibroseis positions were used as in Phase 1 to compare the results. The two walkaround VSPs, containing 48 points with a radius of 750 m and 1,250 m, were added to determine the azimuthal variations of traveltimes. Finally, four walkaway VSP lines, 3,000 m long with 45° azimuthal increments (0° north, 45° north, 90° north, and 135° north), were recorded for future imaging analysis. Because the hybrid fiber-optic and electrical cable was permanently installed downhole, the Phase 2 acquisition was an independent operation without any intervention in the well.

The acquisition of both phases was performed successfully, encompassing 75 hours of operating time without any nonproductive time. More than 3,000 sweeps across 200 vibroseis positions were recorded, with more than 1,800,000 traces corresponding to 115,000 traces on raw stacks—a record for land fiber-optic borehole seismic acquisition.

Record high-quality data in a fraction of the time

The surface seismic conversion (from time to depth) was generated independently using the checkshots of the geophone accelerometer results (Fig. 3a) and the Optiq Seismic solution results (Fig. 3b). A trace located at the well location was extracted and compared for both sets (Figure 3c). An excellent match was seen between the walkaway VSP (WAVSP) image when compared with the corridor stack generated from standard rig-source VSP, which was also acquired in the well using standard geophones. 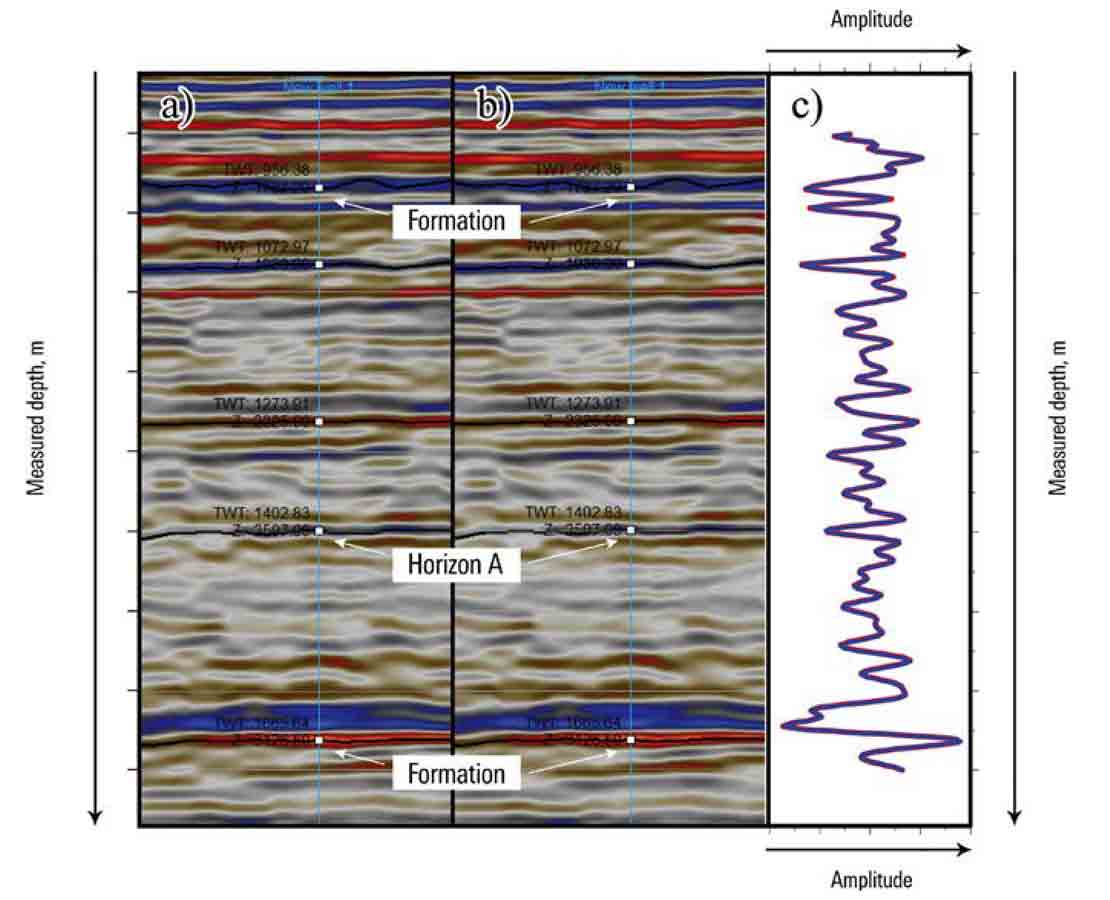 Figure 3. Surface seismic time to depth conversion using the conventional geophone accelerometer times (a) and the Optiq Seismic solution times (b). The inset (c) represents the trace extraction at the well location from 3a (blue) and 3b (red). 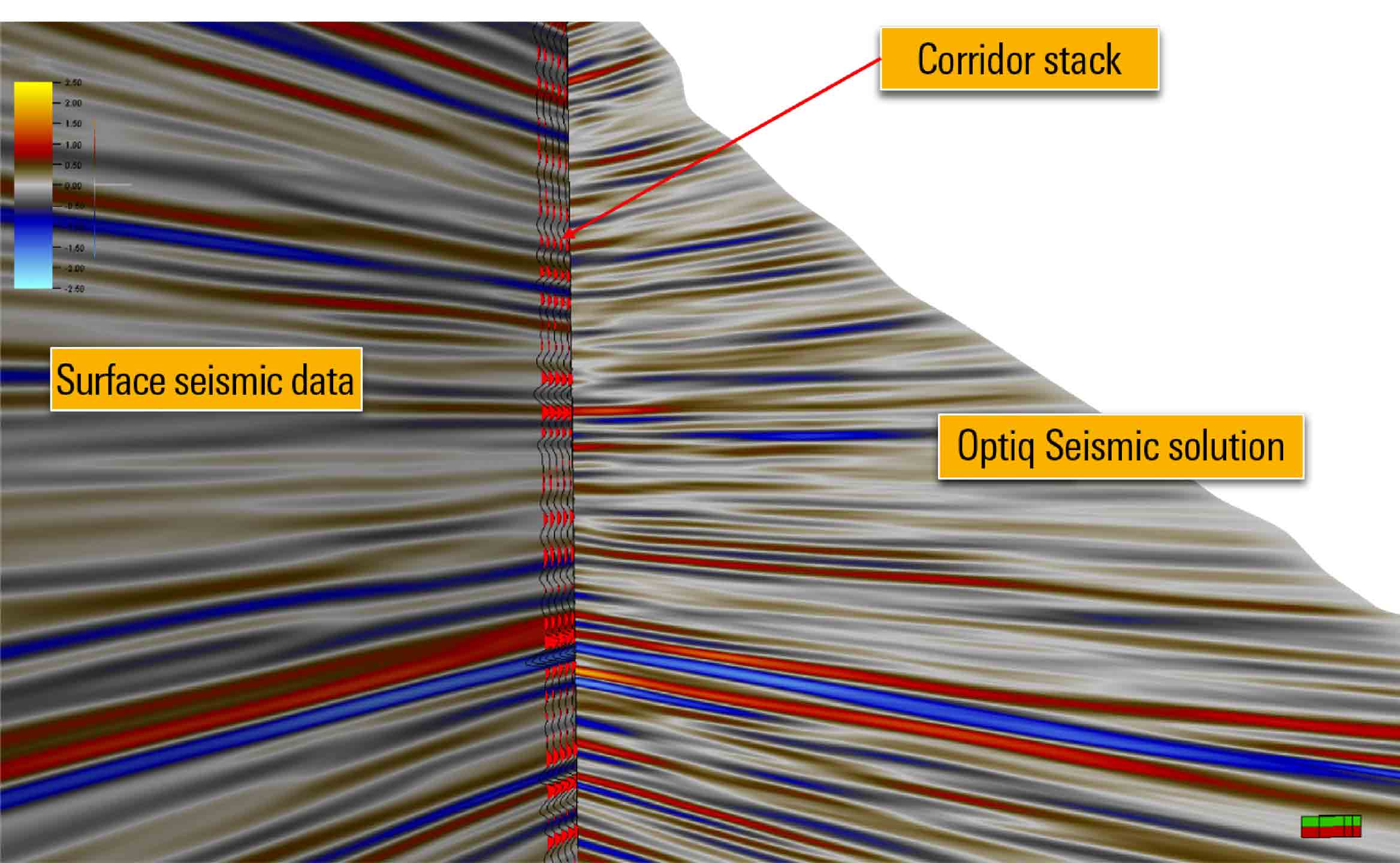 Figure 4. Walkaway VSP image comparison with inline surface seismic data. A significant improvement in resolution near the target zone was achieved from the imaging. The walkaway image also has a very good tie with the corridor stack generated from the standard rig-source VSP survey. 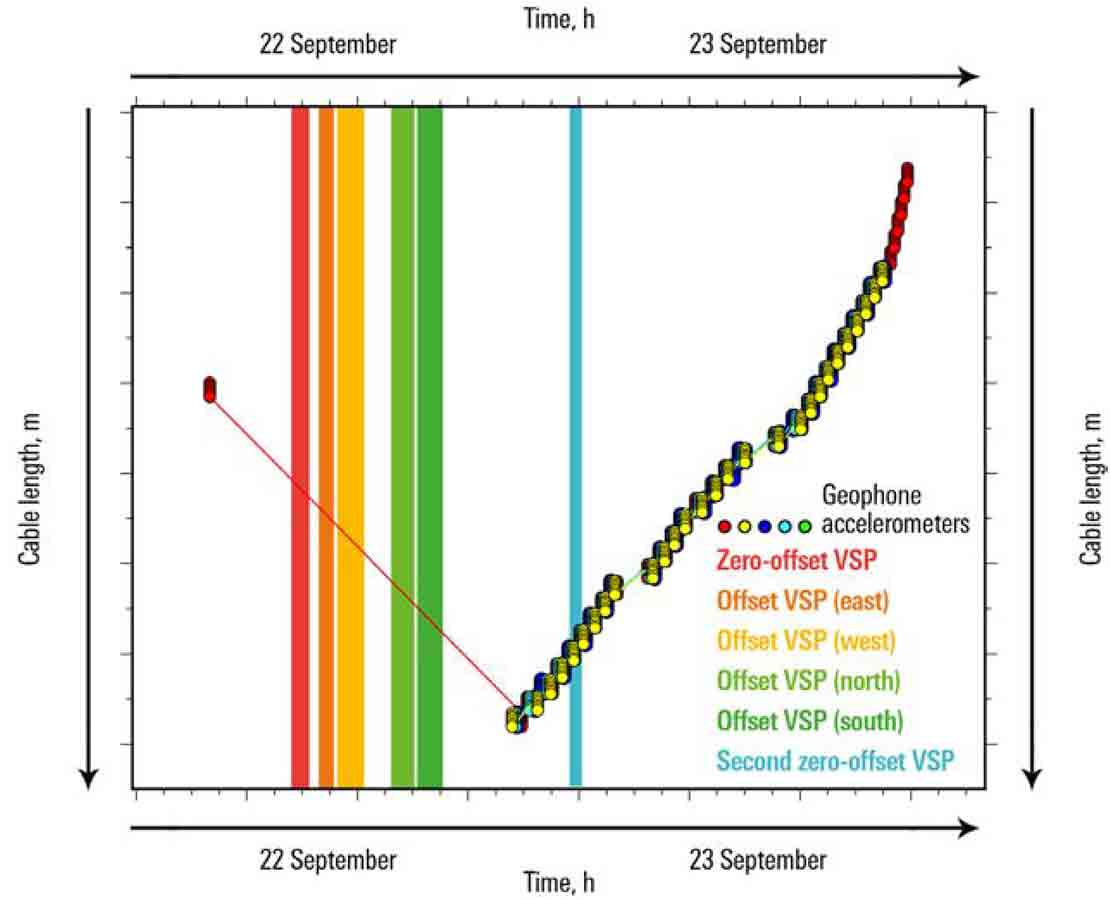 The rig-source and offset VSPs using the conventional geophone accelerometers were acquired in flip-flop mode to minimize the operating time; however, the acquisition time was performed in more than 17 hours without considering the rig-up and rig-down period (colored circles in Fig. 5). Compared with the geophone acquisition, the Optiq Seismic solution took on average 15 min per vibroseis position because of its ability to instantaneously record the full length of the wellbore. This corresponds to 7.5% of the geophone acquisition time (assuming the total time of one rig-source VSP and four offset VSPs), highlighting both the efficiency and effectiveness of the Optiq Seismic solution.

Improve efficiency of borehole seismic operations by eliminating the need for a dedicated seismic descent.