Challenge: Avoid the risk of significant deferred production after a production shutdown at an offshore Angola facility, when a timely restart was jeopardized by the lack of sufficient diesel for conventional preconditioning of the lines against hydrate formation.

A BP deepwater oil field offshore Angola consists of two independent subsea production systems (SS1 and SS2). Multiphase production is gathered in subsea manifolds and routed to a single floating production, storage, and offloading (FPSO) vessel via insulated subsea flowlines and risers. A flow assurance management system, custom built within the OLGA simulator to represent the architecture of the production systems, provides a continuous window for observation of the multiphase flow behavior.

Because of the water depths and nature of the production fluids, the single biggest threat to flow assurance in the field is the potential for hydrate blockage during long production shutdowns. This is particularly critical for the large-bore lines in the production systems owing to the significant production losses associated with shutdowns. With no mature technology in the industry for the remediation of hydrate blockage in deepwater flowlines, hydrate management in the field focuses on prevention. In cold production restarts, therefore, flowlines are typically preconditioned by hot oil circulation (also known as hot dieseling) prior to restarting the wells.

What-if simulations were conducted using the online real-time flow assurance management system powered by the OLGA simulator. The flow assurance simulation identified an alternative to conventional preconditioning: The what-if simulation identified that the hot oil circulation operation could be modified for a more rapid restart with less diesel usage by having an initial batch of diesel “chased” by a batch of dead oil. Running the scenarios in what-if mode required less than 1 day for a flow simulation that would have required several days to execute with an offline simulation analysis. Such time savings are particularly important in critical scenarios that pose a high risk of additional deferred production.

Because the concept was untested, there were concerns that swapping between the diesel and dead oil batches would cause delays. The output from the what-if scenarios showed that the operation was feasible, even with the delay caused by switching between the batches. A maximum target delay was identified in the flow assurance simulator and used along with other key tool parameters to draft a temporary alternative operating procedure.

Use of the temporary alternative operating procedure with reduced diesel requirements resulted in a successful restart. Because of the savings in diesel, the guidelines for this operation have been adopted as the standard operating procedure for the field. Two successful restarts took place in the first year of adopting the procedure to avoid deferrals equivalent to 12 days of downtime and save diesel volumes amounting to 6,000 m3. 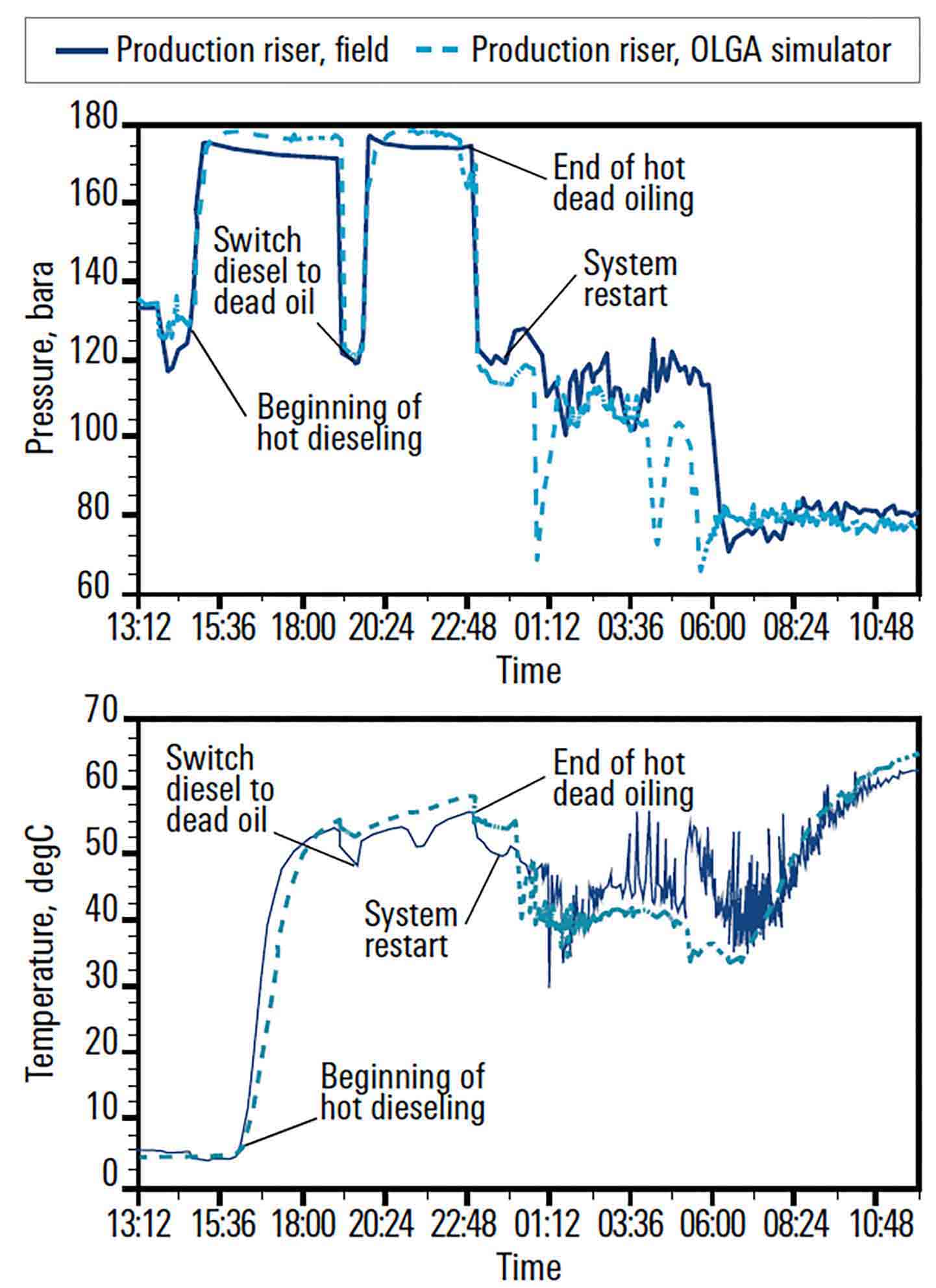 Pressure and temperature trends from the field are compared with OLGA simulator scenarios using the new standard operating procedure. Although transient predictions may not give absolute values within close approximation to instruments in some instances, they give general trends with sufficient accuracy to help inform correct decision-making in critical scenarios.

The proactive approach of the managed services ensures high system reliability, while technical support services provide guidance on how to best leverage the flow assurance management system. Additionally, the managed services provide remote assistance during field operations and enable collaboration among experts in Schlumberger and BP Angola to increase field knowledge and use the simulation tools effectively.

“We avoided significant production deferrals and reduced opex in the first year of using this flow assurance management system. The savings made in the field meant our investment in the pipeline management solution was soon recovered.”

Use the industry-standard tool for dynamic multiphase flow simulation.