Oil and Natural Gas Corporation Limited (ONGC) is an Indian multinational oil and gas company, headquartered in Dehradun, India. The company had identified production issues due to an irregular water cut that affected almost 200 wells in the large onshore field it operated. Some wells were producing with a lower than expected water cut, while a few had higher than expected water cut. To determine future recovery plans, ONGC needed to gain a better understanding of the cause of this issue.

After meeting with Schlumberger, it became clear that streamline analysis would provide the necessary insight into the water-cut differential. The field presented a number of issues for ONGC's reservoir engineering team, including over 30 years of production history to deal with; highly heterogeneous geology; and data collection, quality, and validation concerns. It was decided that a combination of the Petrel E&P software platform and the ECLIPSE FrontSim streamline simulator would allow the team to generate streamlines and perform the required data analysis.

A Petrel workflow was developed to structure the entire process, from the generation of streamlines to the analysis of allocation tables. The ECLIPSE FrontSim simulator was used to generate 3D models of multiphase fluid flow along streamlines, enabling ONGC to identify the dominant flow paths and understand fluid flow behavior within the complex geology.

History matching was then undertaken. Existing geocellular models were upscaled to ensure that the run time would be efficient and manageable. The results from the first few runs matched the oil rate, but the water cut varied significantly. The team used the allocation tables in the Petrel platform to better understand the varying extent to which different well water injectors contributed to and influenced production, and therefore whether water flow rate should be blocked or enhanced to enable a better match.

An iterative history matching method such as this typically takes a long time, especially to match water cut. However, the 3D visualization of streamlines made an otherwise rigorous task much faster, and allowed the team to complete the task in just 15 days. Without streamlines, history matching would have taken up to two months. 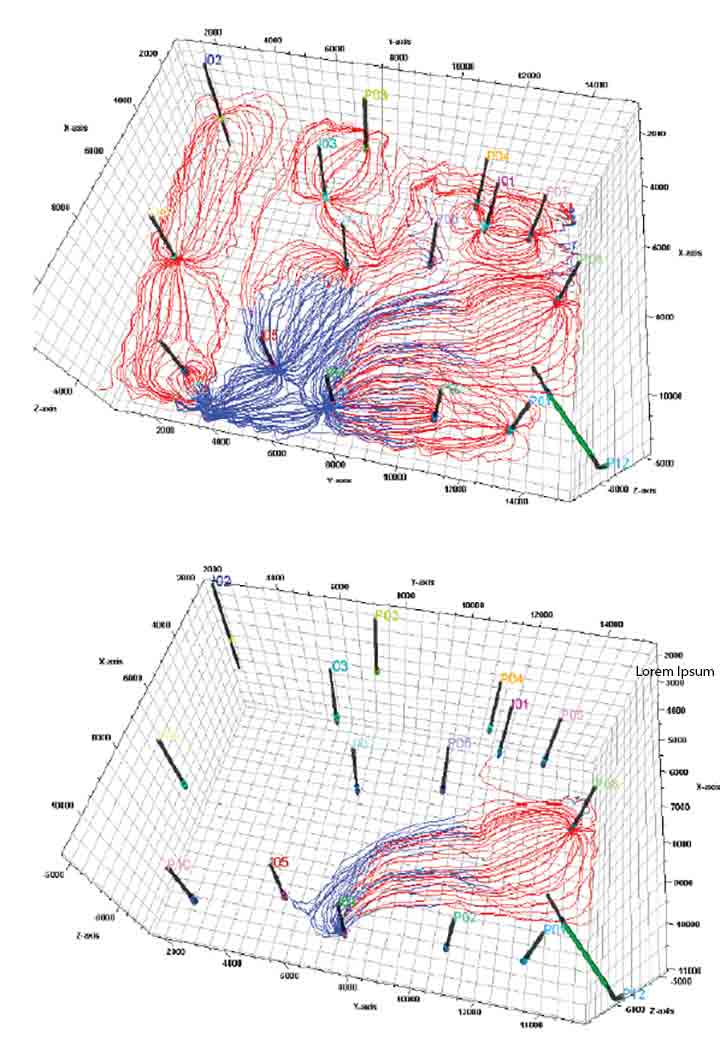 Streamlines from injectors to producers.

The company now benefits from a more accurate performance  review process for the entire reservoir, and greater confidence  in related prediction and planning activities to maximize the field’s future oil recovery.

“The streamlines generated by the ECLIPSE FrontSim simulator helped us history match the water from our wells effectively, and improve confidence in field recovery planning.”