After discovering a gas-condensate field in central Oman, a Middle East operator began drilling appraisal wells. Located on a regional high between two salt basins, the structure is a gently dipping three-way closure on the footwall of a downthrown fault. The principal target is a low-porosity, low-permeability sandstone reservoir at approximately 4,200 m below sea level.

While drilling most of the appraisal wells, the operator encountered problems related to wellbore instability, which accounted for the majority of drilling-related NPT. Problems included breakouts due to borehole enlargement and the drilling of induced fractures, not found within the target reservoir, but instead in shallower and deeper zones. Because the operator planned to drill new development wells, a goal was set to determine what mechanisms were causing borehole failure in various formations and what actions could maintain wellbore stability while drilling.

The operator engaged a team of Schlumberger petrotechnical experts with local and regional knowledge to perform an integrated 3D geomechanical study of the field. In collaboration with the operator's own geoscientists and engineers, the Schlumberger team constructed a 3D geomechanical model for wellbore stability prediction at future drilling locations. 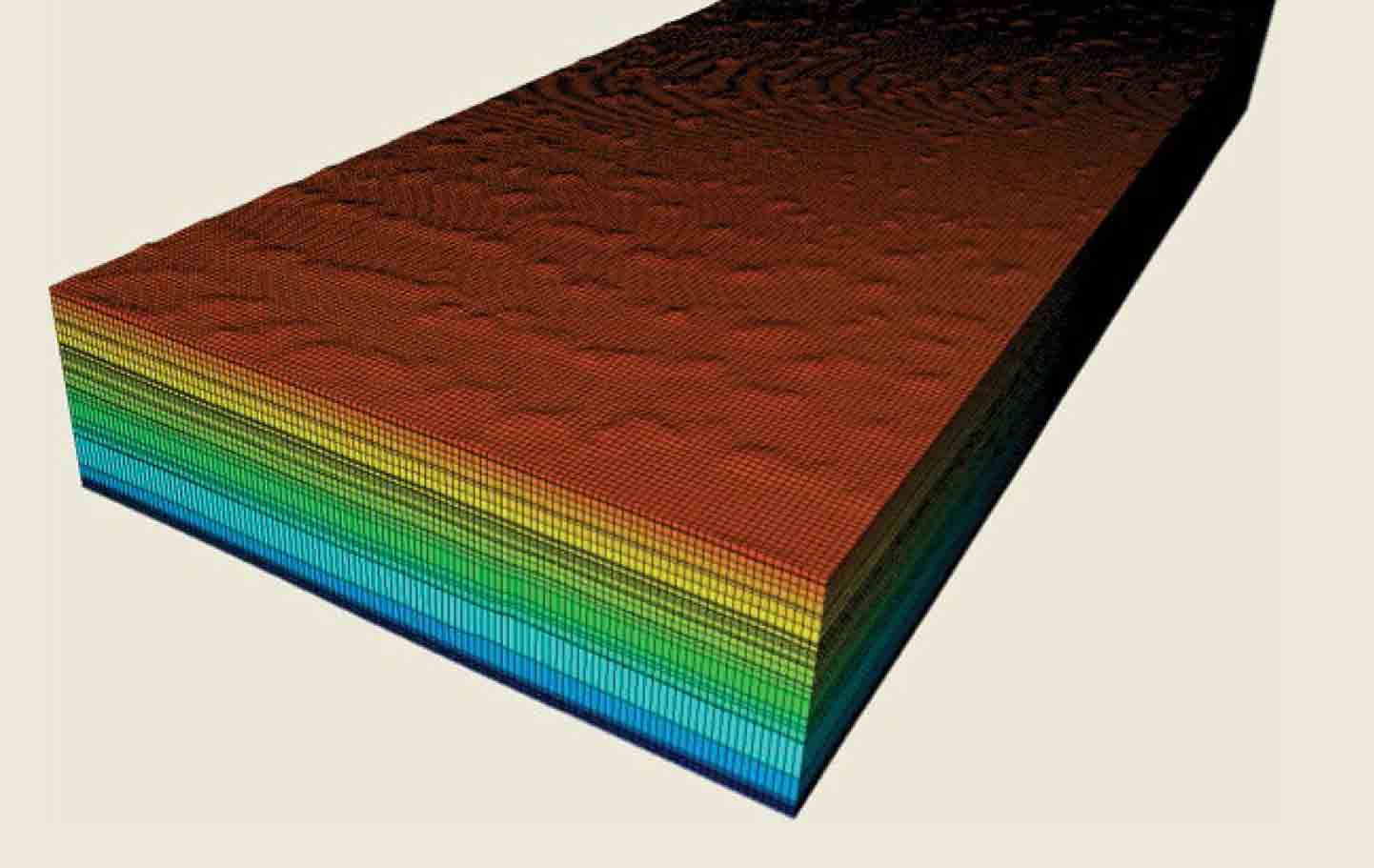 The existing geological model (above) was enhanced by simulating two bounding faults and more than 24 faults within the reservoir based on seismic interpretation. Material properties were assigned to faults based on intact rock properties, then rock elastic and strength properties were distributed throughout the new 3D model using seismic inversion for guidance.

To fully characterize lateral variations in rock properties and stresses between wells, advancements in seismic analysis and geostatistical modeling were applied. Running 3D seismic data through a simultaneous inversion workflow and calibrating the results against sonic and density logs, the team mapped the distribution of porosity throughout the field and generated key rock property volumes for use in 3D geomechanical modeling.

To understand how faults impact stress variations, the existing geological model was enhanced by simulating two major bounding faults and more than 24 faults within the reservoir based on seismic interpretation. To reduce boundary effects, the existing model grid was extended below the reservoir and in both lateral directions. Material properties were assigned to faults based on intact rock properties, then rock elastic and strength properties were distributed throughout the 3D model using seismic inversion for guidance. Finally, equilibrium in stress magnitude and direction was achieved, particularly around faults, by applying appropriate stress boundary conditions to the model. Comparing simulated stress states with actual 1D stress gradients validated the 3D geomechanical model.

Because the field was not yet under production, simulated stresses accurately represented current in-situ stresses. Thus, they could be used to predict wellbore stability at any subsequent well location.

3D geomechanical modeling with seismic inversion yielded more accurate predictions than 1D modeling. Following recommendations from the Schlumberger team, the operator encountered no significant drilling problems due to wellbore instability—successfully mitigating the NPT incurred during drilling at previous wells in the field. 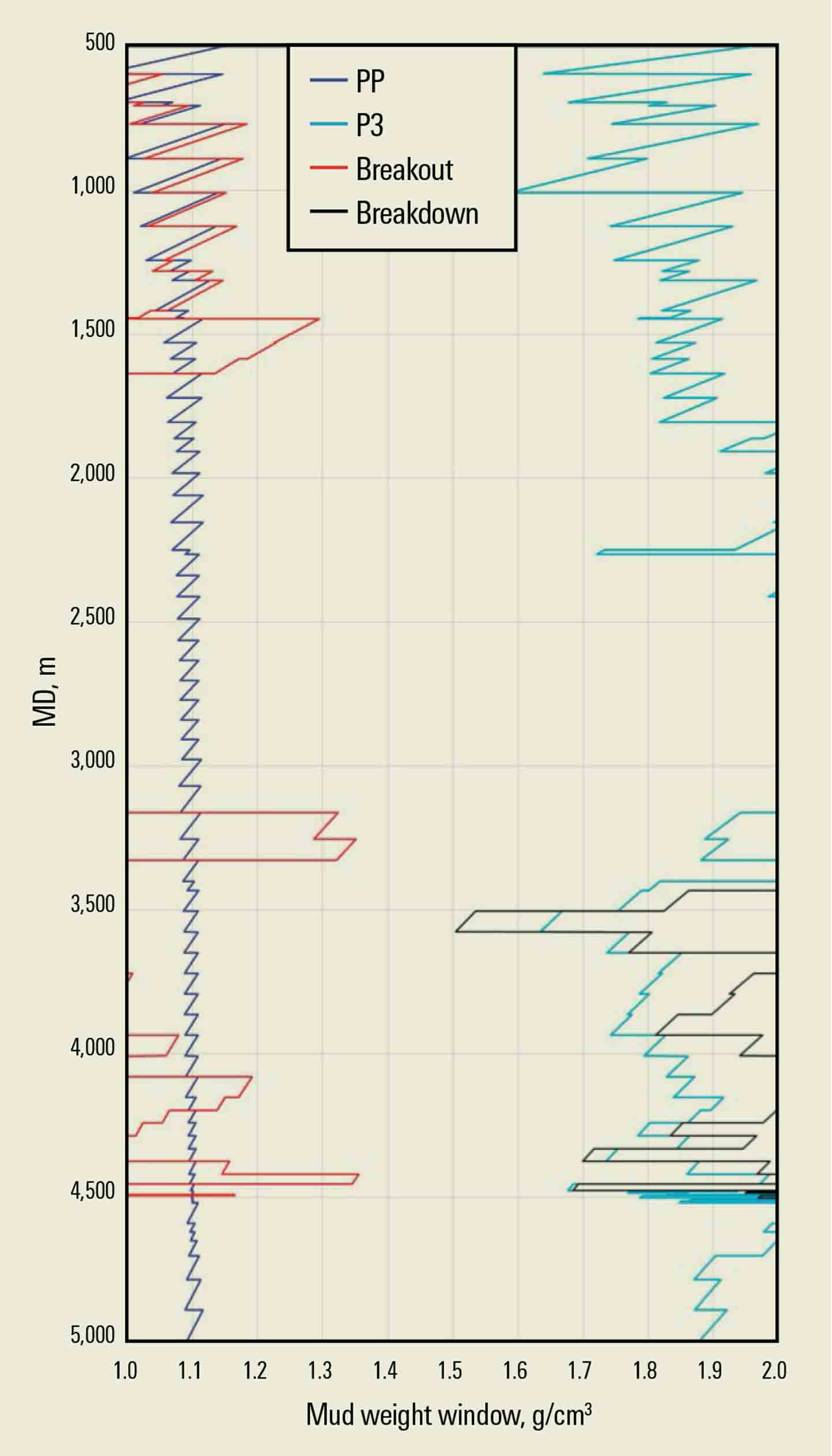