Challenge: Better understand petroleum migration, accumulation, and loss in a basin that has been subject to severe compressional shortening to rank prospective exploration areas.

Results: Generated a consistent 4D geological model of the area that identified multiple possible migration pathways from the potential kitchen areas to provide confidence in exploration decisions in one of the most structurally complex areas in Colombia.

The area has been subjected to intense compressional tectonics leading to a high degree of shortening and structural complexity. Creating a structurally correct model through geologic time would be difficult but essential because pressure-temperature simulations and hydrocarbon migration studies would be meaningful only if they were fully coupled to the structure as it evolved.

The petroleum systems story is further complicated by long lateral migration pathways of up to 400 km and diachronous episodes of migration and trap formation during the uplift and exhumation of the Eastern Cordillera.

CIT-ICP engaged with Schlumberger to provide the necessary expertise for this challenging PSM project. Coupling an accurate 3D structural model to the PSM simulation engine was critical to the success of the project and an area where Schlumberger was able to provide key experience. Full 3D integration with the Petrel E&P software platform allows 3D petroleum systems models generated in the Petrel platform to be simulated via direct connection to the PetroMod software simulation engine.

The work was performed in collaboration among CIT-ICP in Bucaramanga and Schlumberger in Bogota, Colombia, and the Schlumberger Exploration Hub in Aachen, Germany, facilitating access to expertise in structural geology with PSM simulation proficiency across the teams. The development of the model established a new best practice workflow for exploration assessments in compressional environments.

An accurate 3D structural model was coupled to PetroMod software’s PSM simulation engine across the 8 paleosteps.

A set of 30 2D cross sections was structurally restored by CIT-ICP along the main stress direction (northwest-southeast). Each restored cross section was thermally constrained using Ecopetrol proprietary software. To capture the main tectonic events that had implications during hydrocarbon generation and migration, eight paleosteps were selected at 3, 5, 11, 23, 33, 40, 55, and 65 million years. Each stratigraphic unit present in the cross sections was mapped in the Petrel platform for the paleosteps. All maps were then imported into PetroMod software and used as the input to build nine 3D structural models—one present day and eight paleomodels.

The structural models were populated with lithofacies, for which core and outcrop data were used to define lithology types and lateral facies changes. Four source rocks were characterized from laboratory measurements. A specific kinetic model and organic richness as total organic carbon (TOC) were assigned to each source rock.

Pressure and thermal boundary conditions through geological time were defined to constrain the model, and the model was calibrated to well control for pressure, temperature, and thermal maturity.

Detailed hydrocarbon migration studies were performed to understand the filling history and migration pathways with a match to known field and observed accumulations. Analysis of the outputs was conducted to show the dynamic evolution of the basin and the interaction of the key petroleum system elements.

The resulting consistent 4D geological model is the first full 4D model of the area, providing CIT-ICP with a better understanding of the source rock maturity and timing of hydrocarbon generation and migration.

Different tested scenarios identify multiple possible migration pathways from the potential kitchen areas, currently present only over the highlands, to the east of the Llanos basin. Although significant hydrocarbon losses are shown to have occurred through geological time as the development of the Cordillera caused failure of the seal rock, the model confirms the existence of long migration pathways.

The model is well calibrated: The predicted hydrocarbon accumulations include good matches with existing fields and accumulations to improve confidence for supporting Ecopetrol in taking appropriate exploration decisions. The results are being used not only to add new prospective areas but also to focus data acquisition for near-field exploration efforts. 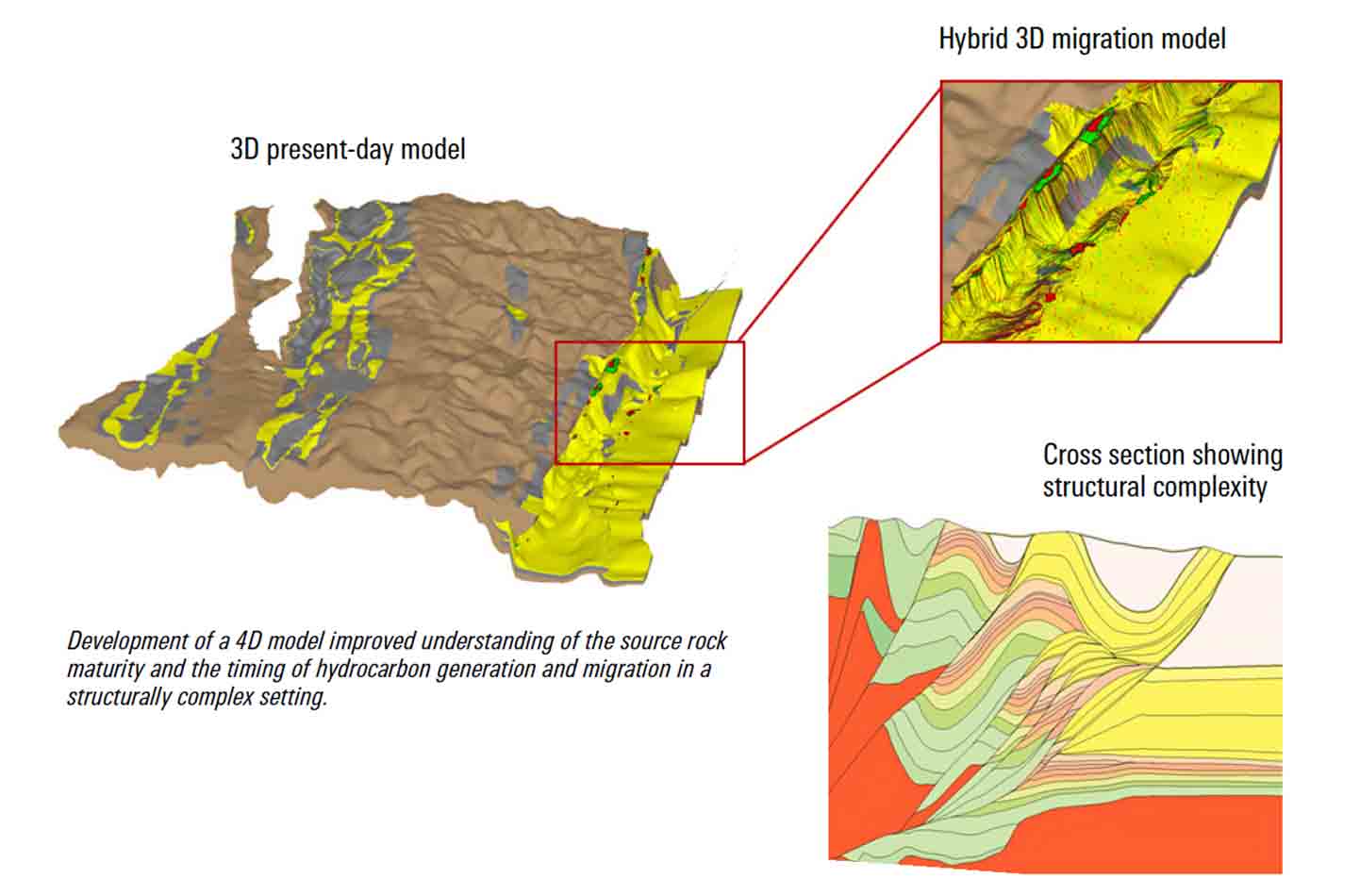