However, these conventional treatments used as much as 150 m3 [39,600 galUS] of polymer-gelled acid, which created a high risk of formation damage from polymer residue. To maximize permeability regain after treatment, the operator wanted to reduce the volume of polymer-based fluid pumped—without reducing stimulation efficiency.

One option considered was emulsified acids, which are widely used in the area. However, this operator’s long (3,200-m [10,500-ft]) 2 7/8-in tubing creates high fluid friction pressure, which is challenging to eliminate with multiphase fluids because of their instability with friction reducers. As a result, using these fluids would reduce the maximum achievable pump rates by 45%, which would severely limit fluid penetration, reducing stimulation efficiency and production. 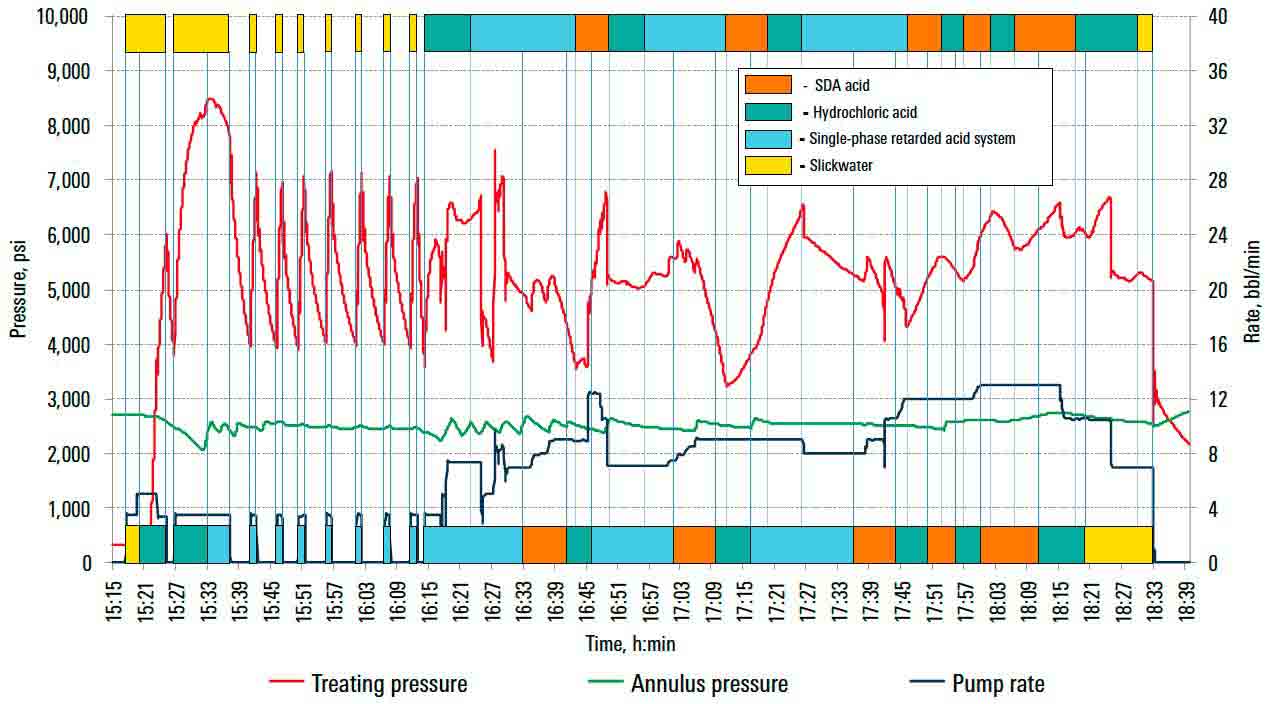 Adding to the complications was a requirement to ensure fluid quality in harsh winter environments. Although the conventional systems can be mixed and pumped in freezing conditions, equipment to heat the fluid tanks and additives added to the location footprint, mixing time, and energy resource requirements for the operation.

The operator asked for a new fluid solution that would enable high pump rates and deeper stimulation with less polymer content and simpler winter mixing.

The single-phase retarded acid system is retarded to penetrate deeply into even extremely reactive carbonate formations and significantly improves friction reduction and stability compared with emulsified systems. In addition, the single-phase system can be mixed in real time, which simplifies operations compared with the complex process of ensuring high-quality polymer gel or emulsified acid.

The SDA acid is used in much lower volumes to help distribute the deep-penetrating acid system throughout the treatment interval. A polymer system mixed with hydrochloric acid (HCl), SDA acid has low initial viscosity, which enables high-rate pumping. When the acid reacts with limestone, the polymer crosslinks and viscosity increases. This diverts subsequent fluid from the highest-permeability rock into lower-permeability zones, ensuring thorough treatment of the interval.

In some jobs for this operator, the nonpolymer VDA acid can be used instead of the SDA acid, achieving similar diversion with just a proprietary blend of surfactants and further reducing the risk of polymer formation damage.

In the first operation with the new stimulation design, 90 m3 [23,800 galUS] of the typical 150-m3 [39,600-galUS] volume of polymer gel was replaced with 60 m3 [15,850 galUS] of single-phase retarded acid system. The reduction in total fluid volume eliminated three truck trips, saving 200 L [53 galUS] of diesel. In addition, fluid mixing time was reduced by 6 hours, which saved another 300 L [79 galUS] of diesel for the mixing and heating equipment.

The single-phase acid system with friction reducer achieved a friction gradient of 490 psi/1,000 ft, which is comparable to the gradient for the conventional gelled polymer fluid (and better than the 720 psi/1,000 ft of the emulsified acid system). This enabled high pumping rates to ensure deep acid penetration and thorough stimulation.