Taking Artificial Lift to the Next Level

Artificial lift has long proved to boost production in the vast majority of wells worldwide; however, pump systems must be carefully managed, especially in unconventional reservoirs characterized by rapid pressure changes and production declines. Traditionally, operators have focused on reacting to shutdowns and then studying trends to observe how pumps are behaving. Companies are now recognizing that the ability to use raw data to make real-time decisions and take immediate action is what makes the difference in maximizing production, minimizing downtime and reducing operating costs.

Operating data of electric submersible pumps (ESPs) are collected at the well site and transmitted for remote surveillance and monitoring. Several different systems are then used to analyze the data and ultimately determine the right course of action, a process that until now has been time-consuming and inefficient.

A new integrated, solutions-based web platform takes artificial lift surveillance and monitoring to the next level by providing analytic and diagnostic tools that enable operators to more proactively monitor and optimize pump performance, from a single well to an entire field. Using analytical tools embedded in the system, engineers can conduct well system diagnostics in real time and optimize data to understand the reasons behind every event to take corrective steps. In addition to monitoring the critical commissioning phase of an artificial lift system, the service provides long-term monitoring and analysis and proactively manages pump operation for the entire production life cycle of the well. 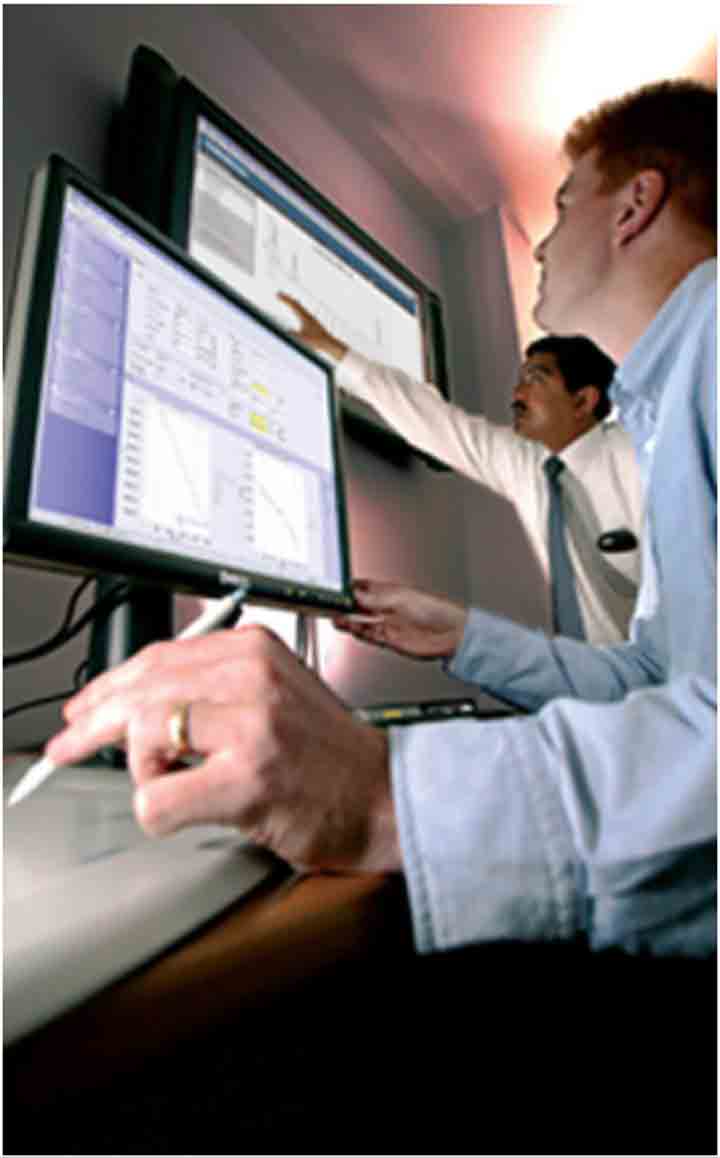 Engineers monitor alarms and analyze data transmitted from multiple wells across fields simultaneously in real time, up to 24/7/365 at a Schlumberger Artificial Lift Surveillance Center.

From a single platform, a dedicated and experienced team of surveillance engineers can monitor hundreds of data signatures that trigger alarms; analyze the data; identify likely causes of pump events, such as gas locking, production declines and solids production; and quickly adjust parameters to avoid shutdowns and return the pump system to normal operating conditions. Data are transferred via satellite or cellular connection from the well site, regardless of location, to a remote, 24/7 Artificial Lift Surveillance Center (ALSC). Centers are located in six strategic regions: North America, South America, Europe, the Middle East, Russia and Asia.

Operators can customize the type of life-cycle management service by choosing from four convenient service levels, all with ALSC access. The first level includes visualization and system protection, the second tier provides proactive ESP management, and the third and fourth levels identify potential wells and fields for production optimization. 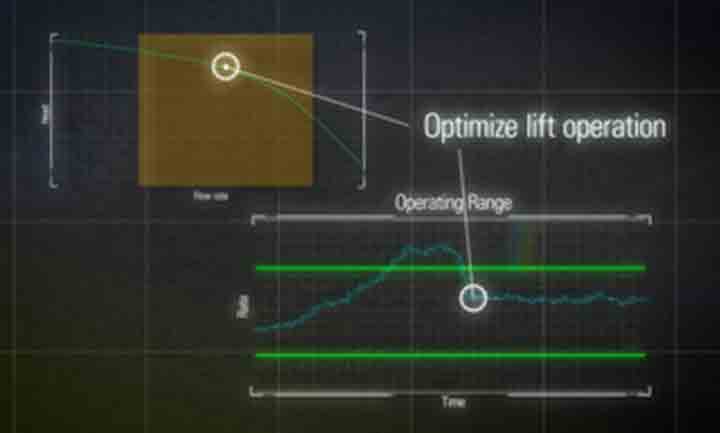 ESP optimization in the Mississippi Lime

An operator in North America selected service level two—remote ESP surveillance, diagnostics and proactive management—to address rapid production declines, solids production and high gas volume fraction in the unconventional, liquids-rich Mississippi Lime Formation near the Oklahoma-Kansas border. The operator needed to maintain ESP uptime to increase production while keeping lifting costs low in four wells with declining multiphase production, high gas-to-liquids ratios (GLRs) and a high degree of produced solids, primarily from sand used in hydraulic fracturing. The key challenge was managing oil production that ranged from initial rates of 4,000 bbl/d down to 400 bbl/d or less after a year of operation and increasing GLRs, from 300 scf/bbl to 1,700 scf/bbl.

Schlumberger designed a strategy that included abrasion-resistant ESPs to minimize risk of failure from solids, with compression pumps to provide enough flexibility to perform over a wide range of production volumes. The pumps needed to be properly sized to lift the initial high liquid volumes, then adjusted when production declined. A multiphase gas-handling system was incorporated to manage GLR variations, while a high-temperature ESP sensor monitored the operating conditions. The sensors provided real-time monitoring of intake pressure and temperature, motor temperature, vibration, current leakage and pump discharge pressure—all crucial for diagnosing pump problems and improving performance in unconventional wells.

To optimize the workflow, the Lift IQ service used the sensor data to diagnose adverse events in real time and recommended within minutes corrective actions. In Well A, the ESP system and production life-cycle management service managed a 94% production decline, from 5,424 bbl/d to 300 bbl/d over 393 days, with 84% uptime. GLR increases from 350 scf/bbl to 1,200 scf/bbl also were managed. The service also helped to overcome communication problems resulting from an ESP in one well tripping the ESP in an adjacent well.

In Well C, the ESP system performed for 654 days through a fluid production decline from 4,275 bbl/d to 750 bbl/d over five months, and a slower drop to 350 bbl/d, with a GLR of 1,200 scf/bbl. Cumulative pump uptime was 68.2%, with most of the downtime related to manual shutdowns, ESP trips during low-or no-flow periods and power-generation issues. The production life-cycle management service analyzed pump alarms in real time to optimize ESP performance as downhole conditions changed, and guided decision-making when communication from a nearby well destabilized the pumps. At the end of the ESP life, this well had 16% more cumulative liquid production than a comparable offset well produced with just 53 days on an ESP followed by gas lift, and 55% more cumulative liquid production than was planned for gas lift alone.

All monitoring, analysis, diagnostics and communication to the field were managed in real time from the ALSC in Houston. On average in the Mississippi Lime Formation, ESPs operated with the production life-cycle management service increased average runlife by 181%, from 118 to 322 days, and managed GLR increases up to 243% and production declines up to 94%.

The Lift IQ service also has been implemented in fields outside North America. In Ecuador the service enabled the successful restart of 42 wells after an unexpected power outage impacted the ESP systems. In addition to deferring production, the power interruption had the potential of causing HSE and security issues. From the ALSC in Bogota, Colombia, engineers monitoring the operation prior to the power interruption were able to remotely restart the ESPs, confirm that the wells were back online and monitor performance during the stabilization period.

The 42 wells were restarted in a record time of 2.8 hours—four minutes per well—instead of the 16.8 hours anticipated without remote intervention. Deferred production was reduced by an estimated 72%, representing a cost savings of $190,000 (Figure 2). 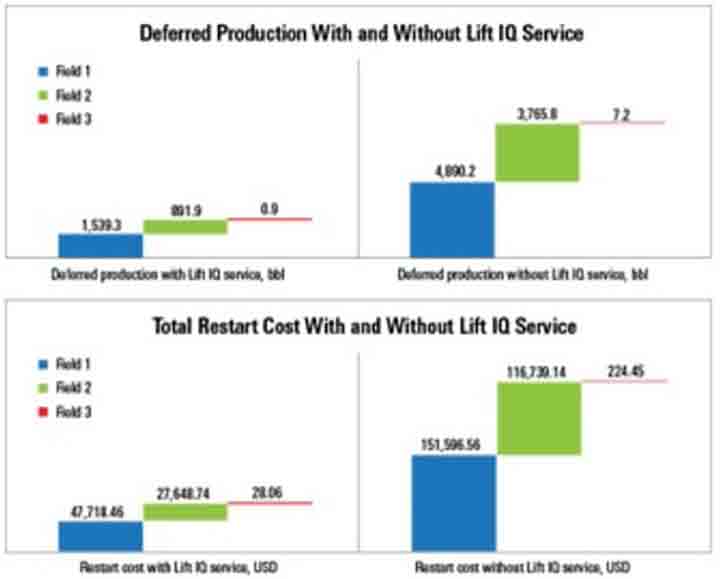 The integration of monitoring and surveillance with real-time analytics and optimization in a single platform with 24/7 remote access has expanded the envelope for artificial lift management far beyond conventional limitations. By applying science to the data to make informed decisions, operators can focus on the entire production life cycle of a well or field, expanding the possibilities to maximize production while reducing cost and downtime.