When using established drilling methods in the cumulatively lengthier lateral sections of Bakken wells, the drillbit goes through the normally pressured formation; however, the high circulation rates and high-density drilling mud used in Bakken wells can result in lost circulation. Differential sticking is another risk. This is caused by the high-contact forces that occur when high differential wellbore pressures from high-density drilling fluid act over a large area of the drillstring (Figure 1).

FIGURE 1. A summary of drilling issues was observed before the MPD application. (Source: Schlumberger)

Generally, sodium chloride brine is used as the primary drilling fluid in the lateral sections. The brine usually ranges in density from 9.8 to 10.1 lbm/gal. If more density is required to control formation pressure, calcium chloride salt is added to the brine to just over 11 lbm/ gal. While the conventional use of brine in the horizontal section facilitates faster ROP and better hole cleaning, the volume of additives consumed to maintain higher mud weights to contain formation pressure can create logistics issues. More tool failures are encountered when calcium chloride is used. Reservoir pressure in the laterals in the region is relatively low, but there is a gas potential. Once the well pressure goes below the formation pressure, gases are entrained, making the brine foam up and resulting in reduced hydraulic pressure and increased corrosion potential. If more density is required than what calcium chloride would provide, the brine fluid would be displaced to higher density oil-based mud weighted with solids.

Dallas-based Petro-Hunt LLC drills and completes its horizontal wells in the Bakken Shale play using a three-string design. The strategy calls for multiwell pad drilling but drilling single wells continuously rather than batch drilling sections. The curve is being built inside the intermediate section so that all shale is isolated, and the production section is purely horizontal.

On some of its recent 3,048-m (10,000-ft) lateral wells in the Bakken, Petro-Hunt experienced differential sticking, packing off, lost circulation and wellbore pressure issues. The average time to drill the lateral sections of the wells was 14 days.

M-I SWACO, a Schlumberger company, suggested managed pressure drilling (MPD) as a solution to address the many challenges presented within the production section and to achieve operational efficiency. The M-I SWACO dynamic pressure management team provided onsite and remote support for each well operation.

MPD is a departure from established drilling techniques in that MPD techniques offer drillers the convenience of changing the wellbore pressure instantly without resorting to adjusting the mud weight up and down regularly for ever-changing downhole requirements. MPD uses additional surface equipment (e.g., a rotating control device, pressure control drilling chokes, flow- meter, etc.) to convert the open-to-atmosphere system to a closed loop. Wellbore limits, such as pore and fracture pressures, are incorporated in the engineering design, and bottomhole pressure is optimized to enable drilling to target depth successfully without issues. Drilling fluid density is supplemented by surface backpressure, which can be adjusted rapidly in response to downhole conditions. This is accomplished primarily through the manipulation of pressure on the annulus. This minimizes formation damage, prevents mud loss, inhibits formation fluid influx and can increase ROP.

Although it originated as a solution to undrillable wells, today wells of all types use MPD or a variation of its technique to manage critical downhole pressures more effectively, leading to improved drilling efficiency and enhanced safety.

Applying MPD to the drilling campaign

Petro-Hunt agreed to trial the MPD alternative technique to address the drilling challenges. This was the first utilization of MPD for the customer and the rig operator, and there was a significant learning curve for the rig crew and other key service providers. On the first well, it took the first 1,219 m (4,000 ft) into the production section for crew orientation and the recommended MPD parameters (e.g., mud weight, flow rates and surface backpressure) to be achieved.

Overall, the MPD implementation in the production section was successful. Operating days were cut in half, drilling 2,993 m (9,622 ft) of horizontal section compared to 2,636-m (8,650-ft) average length standard wells in the area. The comparison includes the time the shoe is drilled to cementing the production string. However, the mud motor on the first bottomhole assembly failed 183 m (600 ft) from total depth. It took one day to replace the motor due to displacing to high-density tripping and changing from conventional tripping procedures. Even with the significant reduction in operational days, there were still some areas for improvement.

Petro-Hunt opted to continue the use of MPD on upcoming wells carrying on the lessons learned to further improve efficiency. Application of the MPD technique accomplished the main objective, which was to reduce the operating days for drilling the production section. This was achieved through the ROP improvements due to a lower mud weight and application of backpressure ranging from 300 psi to 700 psi to minimize surface gas and using the MPD package to handle the gas at the surface while drilling. Previously observed issues were prevented because downhole pressures were carefully adjusted not to exceed designed limits. With relatively lower mud weight, the company can further increase the flow rate to enhance hole cleaning (Figure 2). 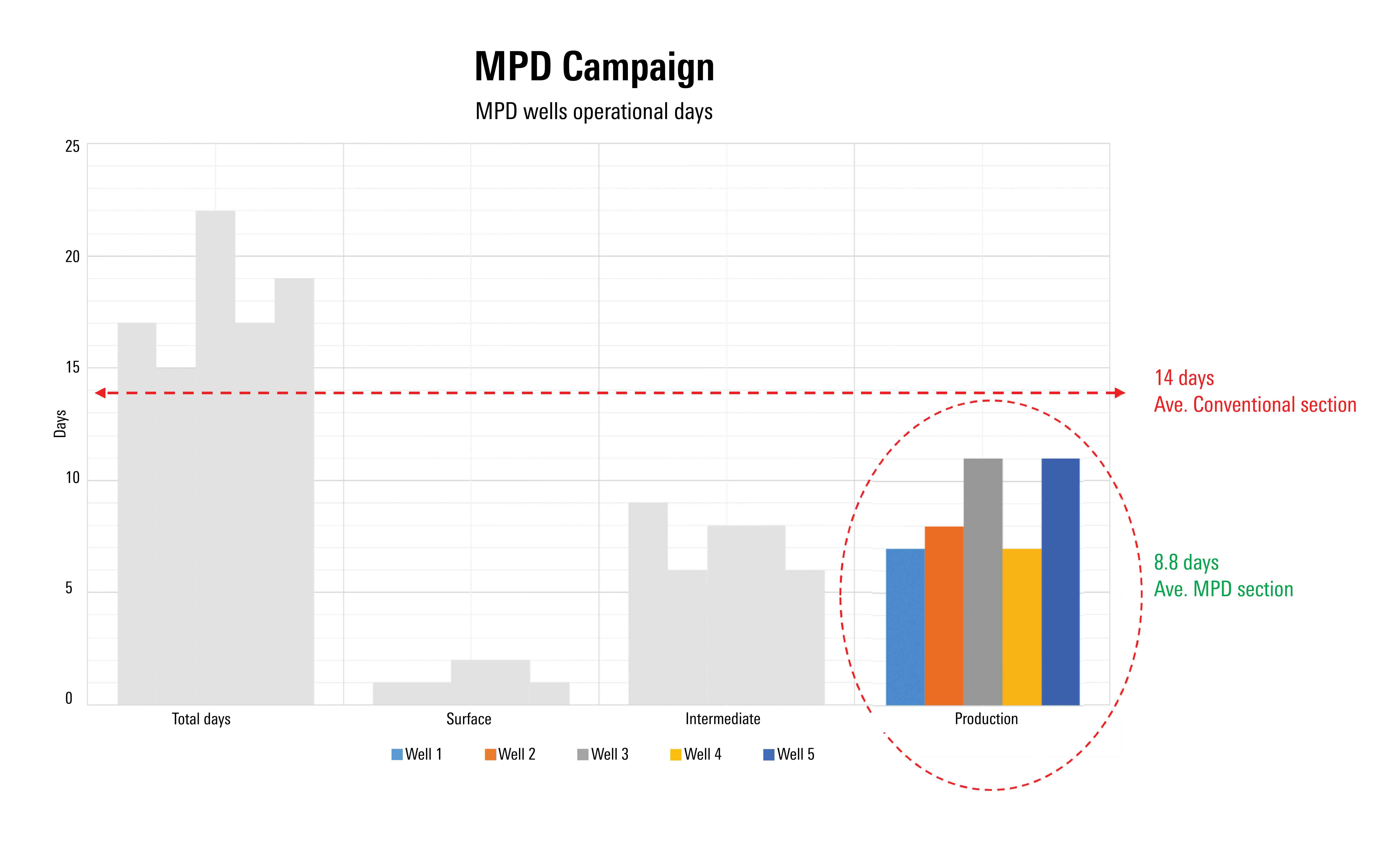 MPD proved to be an overall better alternative compared to standard drilling practices. This system included operational design, remote engineering support and onsite well delivery services from one supplier. The required drilling fluid density was reduced to 9 to 9.5 lbm/gal. It allowed for the streamlining of operations, resulting in better hole cleaning and faster ROP. Less volume of mud additives was applied due to the much lower weight required for the operations. Calcium chloride additions to the drilling fluid were eliminated and no corrosion issues were observed. Losses also were minimized in the intermediate section to below the basin average due to the incorporation of MPD.

To offset high and low downhole pressures that can lead to delays, increased costs and even to failure, Petro-Hunt is successfully using MPD to significantly increase efficiency and margins and reduce overall pad costs in the Bakken.

Acknowledgment: This article was adapted from the SPE194114-MS paper presented at the 2019 SPE/IADC International Drilling Conference and Exhibition.