Challenges are reviewed for multiple-attenuation workflows for shallow-water surveys, including the 3D surfacerelated multiple elimination (3D SRME) workflow as well as workflows that combine wavefield extrapolation and 3D SRME. A proposed workflow improves on 3D SRME results for shallow-water surveys while aiming to remove all surfacerelated multiples rather than just a subset from those multiples. The key step in this workflow is a 3D SRME prediction of freesurface multiples using two input data sets — the recorded data and another data set preprocessed to remove a subset of waterlayer- related multiples. This approach reduces some of the amplitude distortions in the SRME model and leads to overall improvement in results. Properties of the proposed workflow are illustrated with data from two shallow-water surveys acquired in the North Sea with multimeasurement steamers. Processing of the densely sampled 3D shot gathers obtained by joint interpolation and deghosting using the multimeasurement data provides more accurate wavefield extrapolation, better constrained adaptive subtraction, and overall better multiple-attenuation results than processing data from each streamer independently.

The 3D SRME method performs well when sampling and data-conditioning requirements are met (Dragoset et al., 2010). However, 3D SRME faces several challenges in shallow-water surveys. The two main challenges specific to such surveys are the reconstruction of seismic traces at offsets smaller than the nearest offset and the adaptive subtraction of the predicted multiples. For the purposes of our discussion, we will consider as “shallow water” the areas in a survey where water depth is less than about 200 m. For typical acquisition geometries, such water depths correlate broadly with the transition from successful to marginal results when processing data with standard 3D SRME.

In shallow-water surveys, methods based on wavefield extrapolation are often successful (Lokshtanov, 2001; Verschuur, 2012; Wang et al., 2014) in removing a class of high-amplitude multiples that has bounces (e.g., reflections, refractions, diffractions) on the water bottom. Figure 1 provides decompositions of free-surface-related and water-layer-related multiples into subsets, including the subset of multiples modeled by wavefield-extrapolation methods (water-layer multiples with bounces in the water layer on the shot or receiver side, i.e., WLM-SL-LS, with the notation introduced in Figure 1).

Moore and Bisley (2006) propose to follow the attenuation of WLM-SL-LS multiples with modeling of free-surface multiples that are not related to the water layer (FSM-LL in Figure 1a). The approach of Moore and Bisley (2006), known as deterministic water-layer demultiple (DWD), extends significantly the class of free-surface multiples being attenuated, but it leaves in the data multiples of the WLM-LSL type (van Groenestijn et al., 2012). 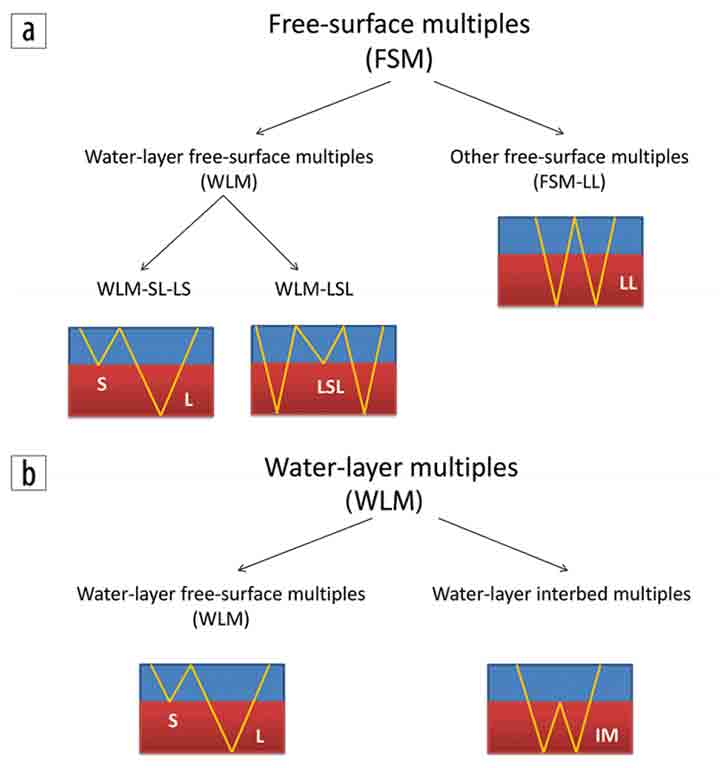 We propose a workflow that has the same first step as DWD, i.e., attenuation of WLM-SL-LS-type multiples by a wavefield-extrapolation approach using a model of the water layer. Next, we use general surface multiple prediction (GSMP), a particular implementation of 3D SRME (Moore and Dragoset, 2008), to predict all free-surface multiples. This prediction uses the results from the earlier DWD step to obtain a model of free-surface multiples that has better properties than a standard 3D SRME model does. In a third step, we subtract from the data the models obtained at each of the two previous steps.

This workflow is applicable to any streamer data, but it benefits in the prediction and subtraction phases from multimeasurement data that are deghosted and reconstructed with dense inline and crossline sampling of receivers (Özbek et al., 2010).

After introduction and formal description of the method, the proposed workflow is applied to a data set from the North Sea with challenging shallow channels. An application to a second North Sea data set illustrates recent developments in the prediction of water-layer-related multiples of type WLM-SL-LS with wavefield-extrapolation methods. The final section reviews current results versus challenges and further opportunities.