Precision Drilling partners with Schlumberger, Pason to deploy algorithm-based remote directional service; two wells drilled so far with only one directional driller on the rig

In 2014, launched an initiative with the aim of industrializing unconventional drilling in North America. Specifically, the companies Precision Drilling, Schlumberger and Pason Systems - set out to transform directional drilling by increasing repeatable high-quality results while simultaneously reducing the manpower and time required to drill a well. This collaboration is now coming to fruition, resulting in a remote directional drilling service that uses Precision’s drilling rigs and Schlumberger’s abbl drilling operations adviser service.

The first well drilled using this service and a reduced crew was drilled in April in Cameron Parish, La., with only one directional driller on the rig. A second well was drilled in July, also in Louisiana, using the same operational model and software. “We certainly believe that this offers the possibility of two things,” said Ariel Torre, Senior Vice President of Integrated Drilling Services at Precision. "One is being able to do the exact same work with fewer people on the rig. The other is that it allows us to be more consistent." 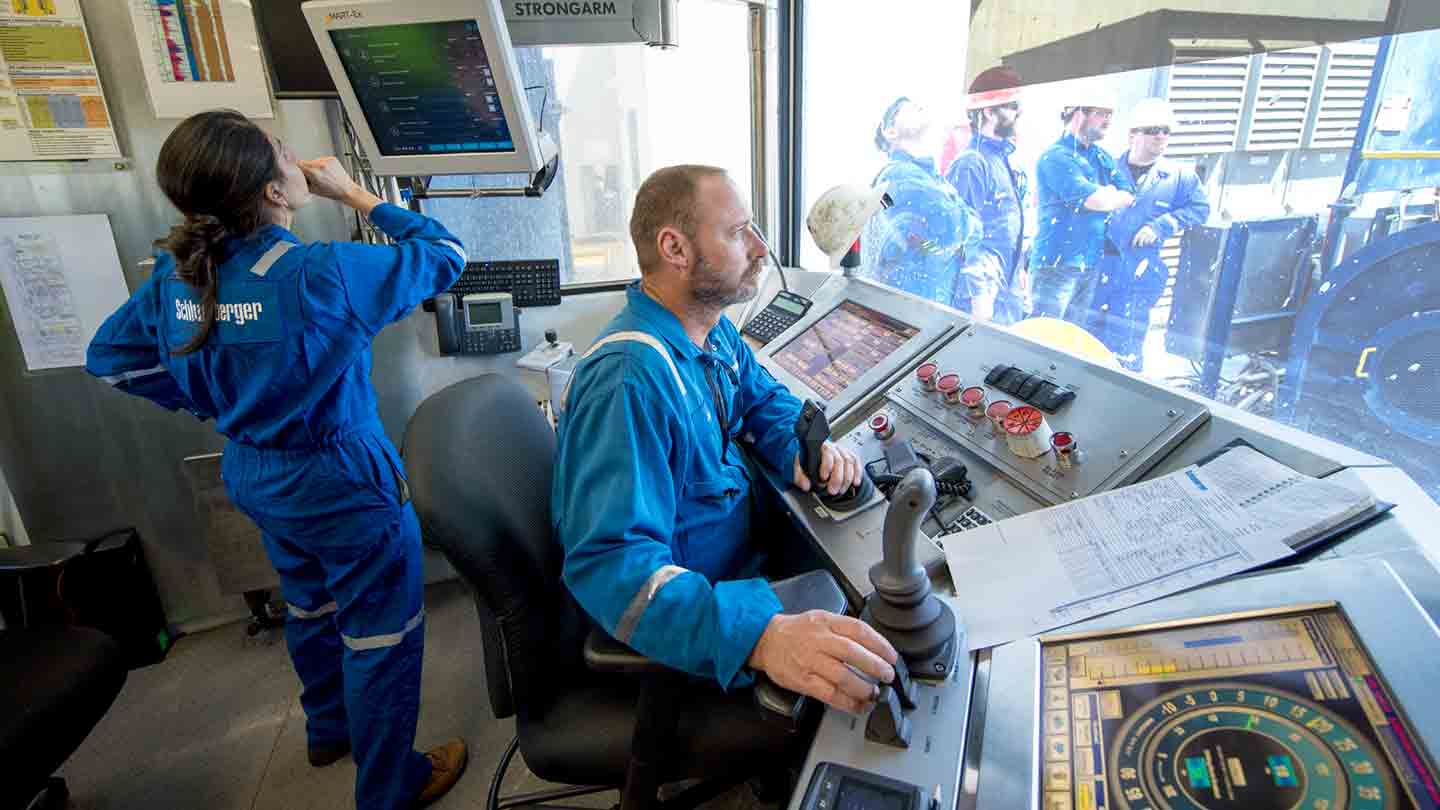 The service uses intelligent algorithms that take real-time downhole and surface data to make steering recommendations. The directional driller, located on or offsite, sees the recommendations and either validates or overrides them. A rig floor screen conveys these step-by-step steering instructions to the driller. Both the driller and the directional driller receive immediate feedback on how well those instructions are executed. This means that a single directional driller can monitor operations on multiple rigs at the same time – up to five right now, according to Schlumberger. The company said that number could increase as the technology matures and crews build up experience with the system.

Schlumberger began developing algorithms for the abbl service in 2014 by analyzing data typically acquired when drilling wells in North America. Algorithms were then tested and tuned by comparing their predictions to actual performance data. To date, more than 250 wells have been analyzed from rigs in a wide range of locations. Schlumberger emphasized that the algorithms continue to be enhanced and optimized based on suggestions from the field and analysis of every well drilled with the service. When employed in drilling a well, the advisor software combines actual downhole and surface data to learn the tendency of the specific bottomhole assembly (BHA) in that well and uses the data to provide real-time feedback and recommendations for drilling the well.

"The software continually estimates the current hole bottom position, compares that position to your plan and creates a set of instructions to go from your current hole bottom position to your next steering target," said Ginger Hildebrand, Operational Efficiency Manager – North America Land Drilling at Schlumberger. As the well is drilled, the system’s recommendations adapt to changes in the BHA tendency, which can be influenced by factors such as driller sliding skill, bit wear, drilling parameters and formations.

Specific step-by-step instructions are provided to the driller on a rig floor display. These instructions are derived from a software-generated “roadmap” for how to achieve a trajectory that meets predetermined steering goals, such as distance to plan and maximum dogleg severity. At the same time, the directional driller – typically working in a remote operations center – and the operator can see the full roadmap and the immediate driller instructions in real time.

"Everybody, regardless of where they are, has a shared understanding of the forward plan, and everyone is informed at each step along the way whether that plan is being executed," Ms Hildebrand added. Because the system gives immediate real-time feedback, drilling engineers, wellsite supervisors and superintendents can see if they are deviating from the plan and make corrections based on the system’s guidance.

For this collaboration, the companies are utilizing Pason’s digital infrastructure. It hosts the abbl software on the rig and DataHub and provides the screens for Precision to access and interact with the technology on the rig. "Pason reliably deploys a network of data aggregation, communication and display technology to the harsh environment of a drilling rig," Lars Olesen, Director of Product Line Management for Pason, said. The company estimates that its digital platform is installed on more than 50% of North American drilling rigs. "The platform enables information to be collaboratively shared in real time digitally or visually between key users at the rig site and remotely via the web. The focus is to ensure the information is simple, reliable and secure."

Because removing directional drillers from the rig site represents a significant change, both operationally and culturally, Precision is taking a multiphase approach to implementing the system for each rig crew and for each operator. The first phase involves running the system in the background, or “shadow mode,” while directional drilling proceeds as usual. "It allows Precision and the operator to see that the service can do the job of the directional driller," Mr Torre said. Over the course of one year starting in August 2014, the abbl system has been run in shadow mode on more than 200 wells.

"We believe it’s a big differentiator in terms of efficiency and potentially cost. What we are doing here is changing the process. That is a clear way of cost reduction," Ariel Torre, Precision Drilling.

In the second phase, the directional driller is asked to follow the algorithm-generated instructions while working on the rig. Crewing modifications may begin in the third phase. There is not a one-size fits-all crewing model because different drilling programs have different complexities, and different operators have different objectives and levels of comfort with remote operations. In the case of Precision’s turnkey operations, one of the two directional drillers is transitioned to a remote operations center in the third phase.

In April, Precision put this system to the test with a turnkey well in Louisiana with only one directional driller on the rig. The objective for the S-shaped well was to maintain verticality to 6,600 ft and build up inclination to 10°, then drill for 5,000 ft in the 12 3/4-in. hole section. Using instructions provided by the abbl service, the well was delivered six days faster than offset wells in the same area, Mr Torre said. In July, Precision drilled a second turnkey well in Louisiana using the same reduced crew operational model and advisor software. The well was drilled in Iberville County, La., and has a similar profile and objectives as the previous one. This well was delivered on par with the fastest offsets despite a challenging directional environment created by abrasive formations, according to Precision.

The contractor is using turnkey jobs as a proving ground for the system because operators are reluctant to experiment with new technologies in this difficult market. "Precision recognizes the need for step-change innovations that will lead to long-term cost reductions for operators," Mr Torre said. He hopes that proving the system on turnkey wells will help to strengthen the case for deployment in non-turnkey wells in the future. "We want to have as many of our rigs as we can running this service. We believe it’s a big differentiator in terms of efficiency and potentially cost. What we are doing here is changing the process. That is a clear way of cost reduction." Precision plans to drill 10 more wells using the system and reduced crews this year.

For example, a common problem is the failure to achieve the desired build-up rate (BUR) in the curve. The service provides realtime feedback on whether sliding is sufficient and adjusts the sliding footage to properly land the well. If the software calculates that the landing point of the curve cannot be reached given current BURs, it alerts the rig crew and advises the directional driller of the closest point that could be reached. The directional driller could then confer with the operator and decide to either drill the alternate path that the abbl service identified or replace the BHA with a more aggressive one that might reach the original target.

"A small problem can be addressed before it turns into a big problem, which could add hours or days to the overall well," Ms Hildebrand said. "The whole vision is to give guidance and immediate feedback so that each well is the best well it can be."

"abbl" is a registered term of Schlumberger.