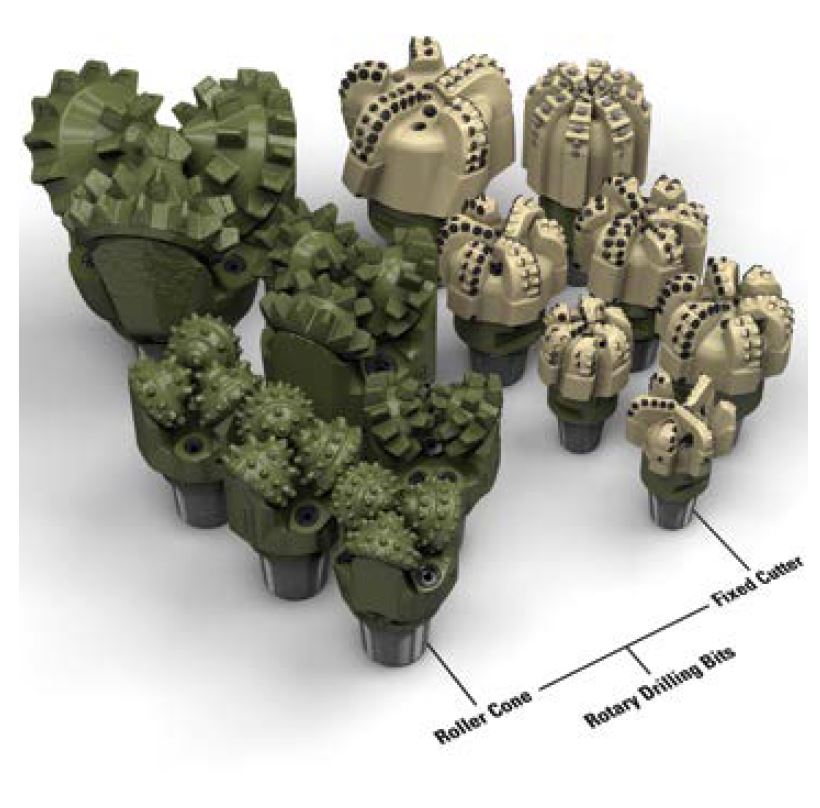 Of all the equipment found on today's drilling rigs, perhaps none has undergone more change than the drill bit. Translating surface horsepower into brute force downhole, the bit gouges, shears or crushes rock as it drills.

The drill bit has evolved throughout the relatively brief history of the modern petroleum industry. Before the drill bit's development, many wells were drilled using cable tool technology, in which a steel cable repeatedly lifted and dropped a heavy spike or chisel into a borehole to break and crush the rock. In 1859, cable tools helped launch the modern oil business when they were used to drill the first commercial US well in Titusville, Pennsylvania. However, cable tool drilling was slow and was eventually eclipsed by a new approach developed in the early 1880s for drilling waterwells. Instead of using the chisel as a percussion tool, the rotary drilling technique bored a hole by rotating the chisel.

The rotary drilling rig uses a spinning rotary table to transmit torque to the drillstring and the bit. Six years after this technique was introduced to the oil field, a steam-driven rotary rig was used to drill the Spindletop well in Texas, USA, further boosting the popularity of rotary drilling. At that time, rotary rigs relied on a fishtail, or drag, bit to drill the wellbore. This bit is shaped like a flat chisel whose blade is divided into two segments. The bit worked primarily by plowing or scraping away at the rock. In deep, hard formations, these bits tended to wear out quickly.

The niche established by the fishtail bit was soon overtaken by the roller cone bit. The two-cone rotary rock bit, patented by Howard Hughes in 1909, later evolved into a three-cone roller bit, which became the dominant bit design for much of the 20th century. However, the development of synthetic diamonds in the early 1970s led to the creation of the fixed cutter, polycrystalline diamond compact bit—a significant departure from the three-cone bit that established a major branch off the bit's evolutionary tree. Most bits in use today can be broadly classified either as roller cone or fixed cutter bits. 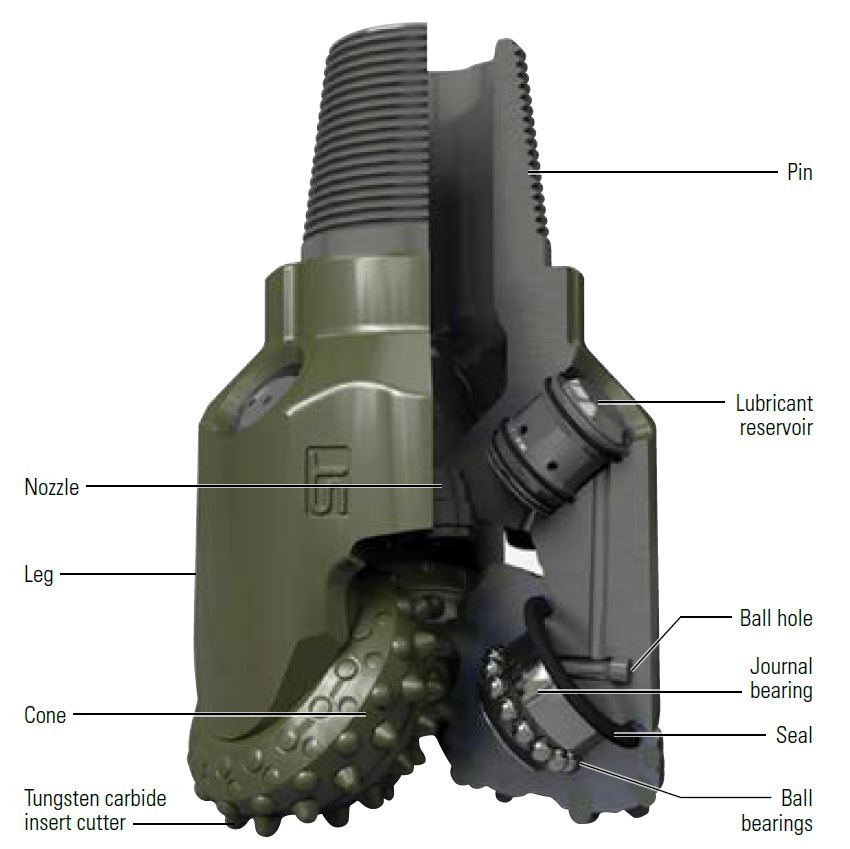 A balance between rock failure mechanisms is achieved by adjusting journal angle, cone shape and offset to control how the cones roll. Journals are axle-like structures about which each cone turns. Offset, or skew angle, is a measure of the degree to which each journal is shifted to prevent the cone axes from intersecting at the center of a bit.

Fluid nozzles were introduced in 1950 to improve bit and hole cleaning and to increase penetration rates by jetting mud at the bottom of the hole to dislodge cuttings. Mud is pumped through the nozzles to loosen cuttings, clean cones and cutters, cool the bit and transport cuttings out of the hole. The number and placement of nozzles affect bit performance. Nozzle direction and location affect the relationship between penetration rate, bit cleaning and cuttings removal. By keeping the nozzle angled to direct fluid onto the cutters, penetration rates improve significantly.

Tungsten carbide inserts bits, introduced in 1951, became a boon to hard-rock drilling. These inserts were harder and more wear-resistant than the best grade of steel and could drill long intervals before wearing out.

Fixed cutter bits evolved significantly beyond the early fishtail and drag designs. These bits have no moving parts or bearings. The cutters are permanently mounted onto blades, which are integral to the structure of the bit. Polycrystalline diamond compact (PDC) bits dominate this category (Figure 2).

The body of a PDC bit is made either from steel or from a matrix com-posed of tungsten carbide [WC] and an alloy, which is then sintered to a steel core. The selection of a steel or matrix body usually depends on the operator's intended application. The ductility and strength of steel allow for PDC bodies that have tall blades and large junk slots, which channel cut-tings past the bit. These bits are used for drilling shales and other soft formations. However, a steel PDC body is less resistant to abrasion than is a matrix body. Because steel is softer than tungsten carbide, hardbanding for wear resistance may be applied to critical areas of the bit that are most susceptible to abrasion. The tungsten carbide matrix, recognized for its wear resistance, is more brittle than steel and thus requires a more conservative blade geometry to prevent the blades from breaking. 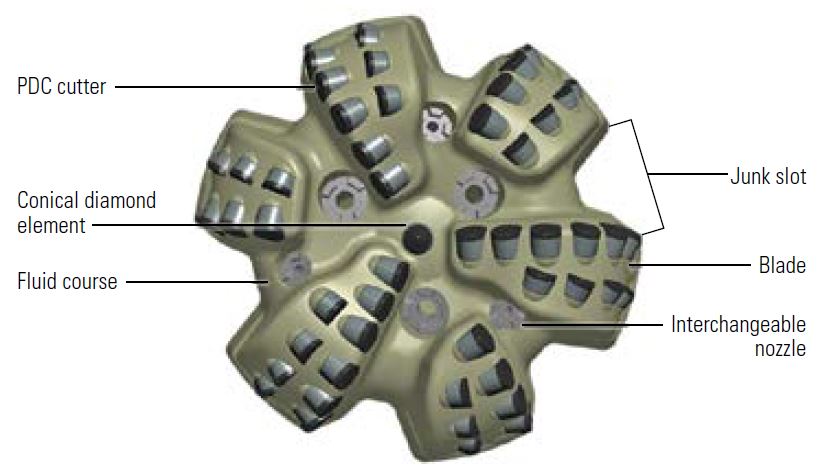 Figure 2. Face of a polycrystalline diamond compact (PDC) bit. The most prominent features of this bit are its blades and PDC cutters. Nozzles direct the drilling fluid downward to help break up the rock. Junk slots and fluid courses provide flow paths away from the bit face to aid in removal of cuttings.

The introduction of PDC cutters fundamentally changed the mechanics of drilling. Instead of gouging and crushing rock, as does the roller cone bit, PDC bits rely on a transverse shearing motion. To achieve the shearing motion, the PDC bit uses a special cutter called a compact - a synthetic diamond disk cemented to a carbide substrate. Diamond is one of the hard-est materials in the world. It is 10 times harder than steel, 2 times harder and 10 times more wear-resistant than tungsten carbide and 20 times stronger in compression than granite. Diamond also has the lowest coefficient of friction and highest thermal conductivity of any known material.

The PDC cutters use a polycrystalline diamond that is synthesized by sintering diamond grit - an aggregate of randomly oriented fine and ultrafine synthetic diamond particles - with a cobalt [Co] catalyst under high pressure and temperature. Unlike natural diamond [C], which fractures along crystallographic planes, polycrystalline diamond has a randomly oriented matrix and no preferred cleavage planes, thus making the PDC cutter extremely hard and resistant to impact and wear.

The diamond table - that part of the cutter that comes in contact with the rock - is sintered to a tungsten carbide substrate. Unlike many substances, tungsten carbide is able to bond to diamond; thus while the substrate gives structural support to the diamond table, it also provides a medium that can withstand brazing—a process used to mount the cutter substrate to a blade on the bit. Some tables have a slight bevel that reduces stress concentration on the cutter as it makes initial contact with the rock at the instant it starts to cut. Although the beveled edge can reduce bit aggressiveness, it helps increase durability and impact resistance.

Coring bits also employ diamonds. These toroidal bits are used to cut core through zones of interest. Coring bits are hollow in the center to permit the cylindrical rock sample to be collected in a core barrel mounted above the bit. Rock cores are usually cut in about 9-m [30-ft] increments.

In certain formations, air drilling operations are required to make hole. When hard rock formations are encountered, the operator may call for a percussion hammer bit. These bits pound the rock vertically in much the same fashion as do air hammers used in construction. A piston above the bit imparts force through impact to drive the bit.

A New Type of Cutter

A recent step in the evolution of the fixed cutter bit is the development of the conical diamond cutter. With twice the diamond thickness of conventional PDC cutters, the conical diamond element (CDE) has demonstrated improvements in impact strength and wear resistance. When placed at the center of a conventional PDC bit, the CDE crushes and fractures rock for improved rates of penetration. Multiple CDEs can also be placed across the bit face for increased footage and improved toolface control compared with those of conventional PDC bits.

Occasionally, a new, disruptive technology transforms the way things are done. Wells were once constructed by hand but were later dug using cable tool rigs and then drilled by rotary rigs. The future will probably be defined by another technology - perhaps laser, ultrasonic, microwave or thermal technology - that relegates rotary drilling to a footnote in history. Until the next radical development in borehole construction is introduced, the bit by design occupying the front of the drillstring will remain at the cutting edge of drilling technology.

For help in preparation of this article, thanks to Wiley Long, Houston, Texas, USA.
Oilfield Review 2016.
Copyright © 2016 Schlumberger.