Rock cores provide essential data for the exploration, evaluation and production of oil and gas reservoirs. Physical rock samples allow geoscientists to examine firsthand the depositional sequences penetrated by a bit and offer direct evidence of the presence, distribution and deliverability of hydrocarbons. Cores provide ground truth for calibration of well logs and can reveal variations in reservoir properties that might be undetectable through downhole logging measurements alone. Operators are better able to characterize pore systems in the rock and model reservoir behavior to optimize production based on the analysis of core porosity, permeability, fluid saturation, grain density, lithology and texture. These analyses are carried out in core laboratories around the world.

Before the samples reach the laboratory, they must first be extracted from formations below the Earth's surface. The process of coring-obtaining representative samples of the formation-is undertaken in either of two ways. Conventional coring is performed as the zone of interest is being drilled; sidewall coring is carried out after that zone has been drilled. Each method yields distinctly different rock samples, and each requires its own coring strategy, procedures and equipment.

Conventional cores, also known as whole cores are continuous sections of rock extracted from the formation in a process similar to conventional drilling. The two operations differ chiefly in the type of bit used: Instead of a conventional drill bit, coring uses a hollow bit and core barrel in the bottomhole assembly (BHA) (below). 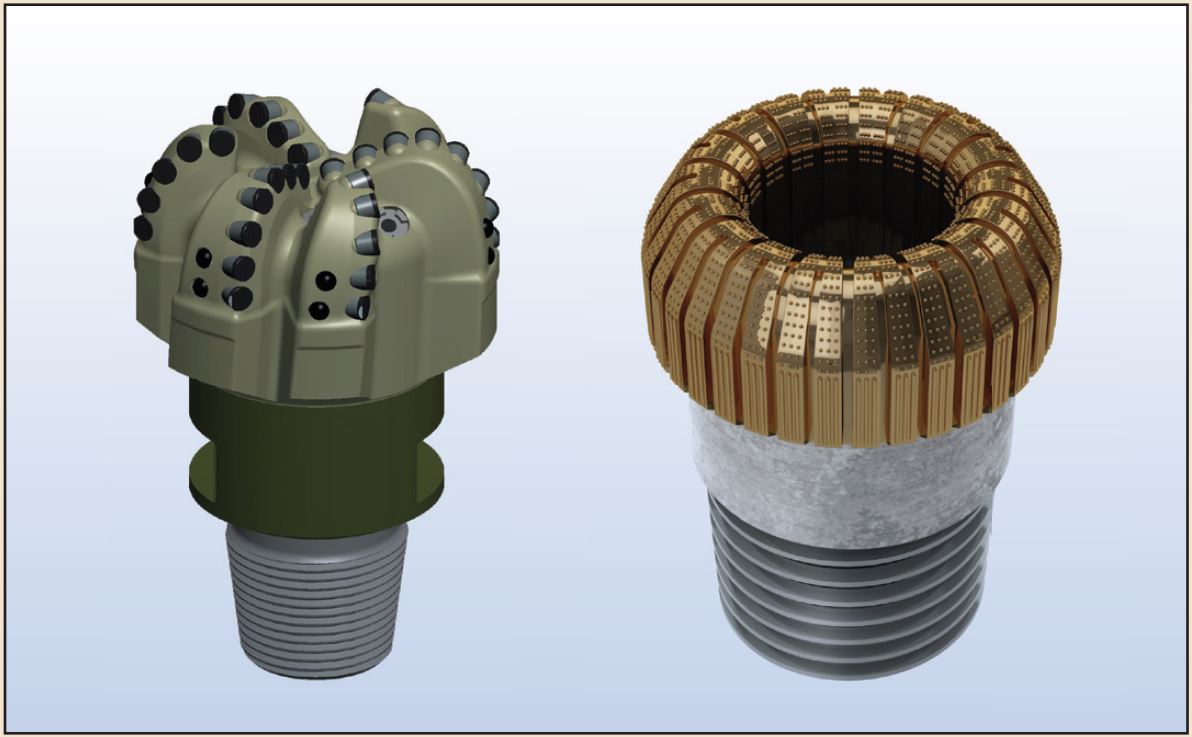 Bits for drilling versus coring. Whereas a drill bit (left) is designed to grind away rock at the bit face, the toroidal face of the coring bit (right) employs a fixed cutter design that leaves the center of the borehole untouched. This hollow bit creates a cylindrical core of the formation that passes through the middle of the bit to be retained within a liner inside the BHA.

During conventional coring operations, the operator first drills the well down to a zone of interest using a conventional drill bit and drillstring. A wellsite geologist closely monitors drilling progress to decide when to begin coring operations. The timing of this decision is critical because if the coring begins too soon, the operator will waste rig time obtaining unneeded core above the zone of interest; if coring begins too late, the drill will have already penetrated the zone and possibly miss the most crucial section of the formation.

Correlations with offset well logs usually provide the first indication that the drill bit is nearing the coring point. By charting the formation type, drilling rate and amount of gas extracted from the mud during drilling, the geologist can create a mud log that may be compared with logs from offset wells. Some zones have been cored simply on the basis of a drilling break—an increase in drilling rate, which is often accompanied by an increase in gas or evidence of oil in the formation cuttings. Modern logging-while-drilling technology, however, can deliver resistivity-at-the-bit measurements in real time to help operators determine when the bit is approaching the zone of interest.

Once the geologist gives the order to begin coring, the driller pulls the drill bit out of the hole, and the drilling crew exchanges the drilling BHA for a coring bit and core barrel. The hollow coring bit grinds away the rock, leaving a cylindrical core of rock at its center. This core is retained inside the core barrel, which is mounted just above the bit. The core barrel consists of an inner and outer barrel and a core catcher. These barrels are attached to a swivel that enables the inner barrel to remain stationary while the outer barrel rotates with the coring bit. Drilling fluid can circulate between the inner and outer barrels. The catcher keeps the core from slipping out through the hollow bit when the coring BHA is retrieved to the surface. Cores typically range in diameter from 4.45 to 13.34 cm [1.75 to 5.25 in.] and are usually cut in 9-m [30-ft] increments, corresponding to the length of the core barrel or its liner, which in turn, is consistent with the length of standard drillpipe.

When the core barrel is full, the drilling crew pulls the drillstring to the surface and retrieves the core barrels. A core recovery specialist lays the barrel liner on the pipe rack. The liner, with core inside, is then scribed with depth markings and orientation lines. The metal liner is usually cut into segments and sealed at each end for shipping to a core analysis laboratory.

Conventional coring operations often provide the best rock samples for testing, analyzing and evaluating reservoirs. However, the time required to cut and recover whole cores can impact drilling efficiency. Depending on coring objectives and cost limitations, some E&P ventures may deem conventional coring nonessential. In such cases, the operator may turn to an alternate method for sampling downhole formations.

Sidewall cores (SWCs), plugs of rock taken from the wellbore wall, may offer a cost-effective alternative to conventional cores. The SWCs are usually acquired by wireline tools, and a single wireline descent can recover SWCs from multiple zones of interest.

After the driller reaches a casing point or drills to total depth (TD), the drillpipe is pulled out of the hole and the well is logged before casing is set. Sidewall cores typically are obtained after logs have been run, usually near the conclusion of an openhole wireline logging job. This gives geologists time to pick core depths after consulting the logs to identify zones that merit sampling. Wireline gamma ray or spontaneous potential logs are used to correlate between openhole log depths and core depths. Sidewall coring devices are controlled from the surface logging unit and can extract samples from the side of a wellbore at up to 90 selected depths.

Percussion sidewall coring gun. A core bullet is fired from a core gun by explosive charges (not shown) placed behind each bullet. Steel cables, attached to each bullet, help extricate the bullets from the formation after they have been shot. Core guns are retrieved to the surface with core bullets attached, and technicians remove core samples and seal them in bottles.

Petrophysicists use SWCs to validate log responses and obtain empirical petrophysical and geophysical properties. Sidewall cores also offer an alter-native means for petrophysicists to acquire core data should conventional coring operations fail. However, because of their small size relative to conventional cores, SWCs taken from a heterogeneous formation may not have properties that are representative of the formation at a reservoir scale. The rock from which the SWC is taken may also lack crucial features that geologists need to analyze the reservoir, especially in laminated sand-shale sequences, organic shales and fractured reservoirs.

Two types of wireline sidewall coring devices—percussion and rotary—are available. A percussion coring tool, or core gun, has bullet-shaped core barrels mounted on a carrier (above). The core gun uses small explosive charges to propel individual core barrels into the side of the wellbore to capture samples of the formation. In contrast, a rotary coring tool uses a small, horizontally oriented coring bit to cut plugs from the side of the borehole (below). Of the two methods, percussion coring has been the most common; however, in some environments, especially hard rock reservoirs, deepwater exploration and unconventional resource plays, petrophysicists may prefer to work with rock samples obtained by rotary coring tools. 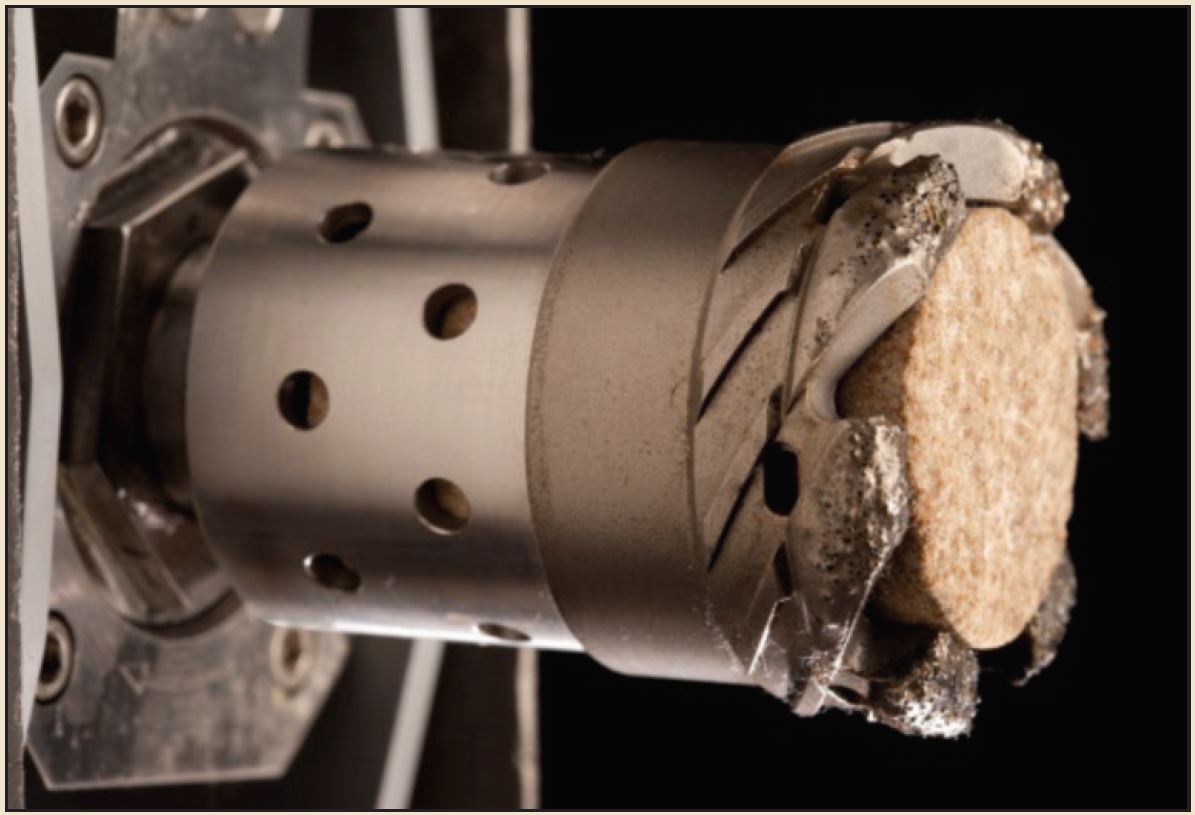 Rotary coring bit. A rotating circular bit cuts a core from a borehole wall. When the bit reaches its maximum depth, the assembly is canted upward, which breaks the core from the formation. After the core is pulled back into the tool, the operator repositions the tool to cut the next core.

Core guns obtain SWCs measuring from about 2.86 to 4.45 cm [1.125 to 1.75 in.] in length by 1.75 to 2.54 cm [0.688 to 1 in.] in diameter. Each core barrel, or bullet, is fired sequentially by command from the surface after the tool is positioned at the desired sample depth. Bullets are attached to the gun body by means of flexible steel cables, which facilitate extraction of cores from the sidewall. After a bullet embeds in the formation, the wireline operator uses the weight of the gun and the force applied by the wireline logging unit to work the bullet and its core free from the side of the well-bore. After the cores are shot, the gun is pulled to the surface, where logging specialists use a plunger to push each sample from its barrel into a sample bottle. The bottles are sealed and marked with the sample depth then boxed and transported to a laboratory for analysis.

Rotary sidewall coring tools employ diamond-tipped drill bits, which are miniature versions of those used for conventional coring operations. At each core point, the core bit assembly pivots from its recessed transport position in the tool to a position perpendicular to the tool body. The bit cuts a round plug of formation material directly from the borehole wall. The tool then snaps off the core and pulls it into a holding area inside the tool body. This process is repeated until the core-catching apparatus is full. Cores from older-generation rotary coring tools are typically less than 2.54 cm [1 in.] in diameter; however, some large-volume rotary sidewall coring tools are capable of drilling up to 50 cores, each 6.4 cm [2.5 in.] long by 3.8 cm [1.5 in.] in diameter. This device produces core samples that have more than three times the volume of percussion SWCs.

The process of coring requires planning, attention to formation characteristics and specialized equipment. Prior to drilling a well, the operator must factor the expense of the coring operation into the formation evaluation bud-get, including the cost of rig time, coring equipment, laboratory evaluations and logistics. The information extracted from cores depends in part on their size and quality, which in turn, control the types of analyses that may be per-formed. For some wells, routine analysis of porosity, permeability, saturation and petrology are sufficient to guide operators towards a future course of action. Frequently, additional analyses are required. These include evaluations of multiphase saturation and flow properties such as capillary pressure and relative permeability, log-tuning measurements such as electrical proper-ties for determining porosity and saturation from logs, geomechanical measurements or enhanced oil recovery evaluations. Core analysis, in its many forms, informs operator decisions to drill ahead, abandon or complete their wells. These analyses add tremendous value to reservoir evaluation, and they all begin with the coring process.