Heavy oil is abundant but more expensive to produce and refine than conventional oil; increasing...

Heavy oil is an abundant energy source; however, it is more expensive to produce than is light, or conventional, oil. Most heavy oils are not recoverable in their natural form or through conventional production methods. In addition, because it is more expensive to refine, processors pay producers less for heavy oil than they pay for crude oil producible via conventional recovery methods. In recent years, however, increasing worldwide energy demands and technology innovations have made heavy oil a viable resource.

Heavy oil is a crude oil that has a viscosity typically greater than 0.01 Pa.s [10 cP] and a high specific gravity. The World Petroleum Congress classifies heavy oils as crude oils that have a gravity below 22.3 degree API. Other characteristics include low hydrogen-to-carbon ratios and high asphaltene, sulfur, nitrogen and heavy-metal content as well as high acidity. By comparison, extraheavy oils and bitumen have gravities of less than 10 degree API while condensates have a gravity of about 70 degree API (Figure 1).

Figure 1. Heavy oil components versus conventional oil components. Heavy oil (left ) contains a higher percentage of low-gravity, high-viscosity fractions than does conventional oil (right ) and therefore needs more upgrading, by fractionation or chemical treatment, before refining operations to convert it to light products. Simple upgrading is conducted to reduce the viscosity of the heavy oil while more elaborate upgrading processes can produce a crude oil substitute of high quality. 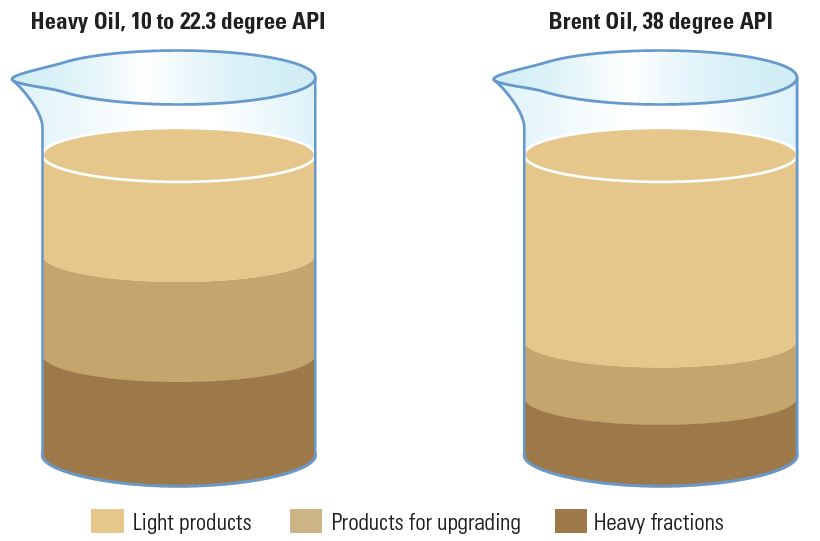 Heavy oils originate as conventional oils that migrate upward to shallower traps, where they subsequently degrade to heavy oil. The majority of the world's heavy oil resources are in enormous shallow deposits at the flanks of foreland basins. Foreland basins are extensive depressions formed by down-warping of the Earth's crust during the creation of mountains. Marine sediments in the basins become source rock for hydrocarbons that migrate updip into sediments eroded from young mountain chains (Figure 2). The shallow, cool sediments often lack effective sealing caprocks, thus creating conditions that are suitable for severe degradation of hydrocarbons. 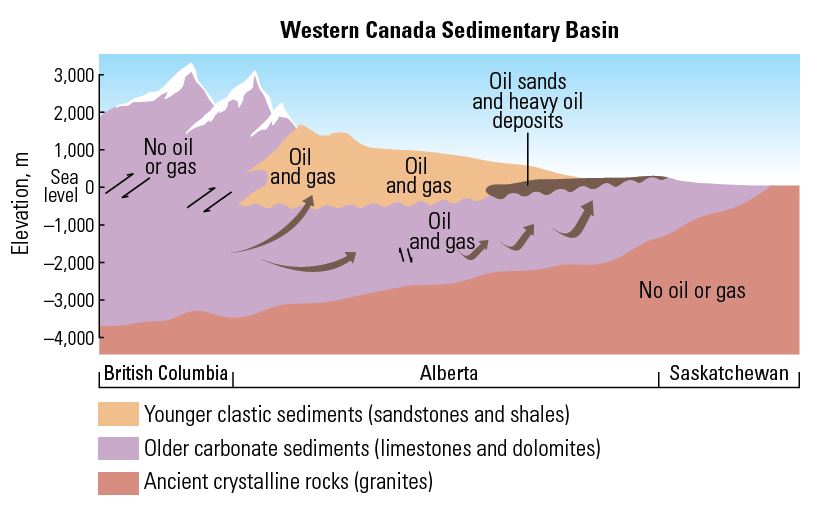 Figure 2. Deposits of heavy oil in Western Canada. When the mountains of British Columbia were thrust up, the bending of the Earth's crust created the foreland basins of Alberta in front of the mountain range. Marine sediments (purple) became source rock for hydrocarbons (dark brown) that migrated updip (dark brown arrows) into eroded mountain sediments (orange). Microbes in these fairly cool sediments biodegraded the oil, whereby heavy oil and bitumen were formed.

Over geologic time scales, microorganisms metabolize lighter hydrocarbons and produce methane and enriched heavy hydrocarbons. This in situ biodegradation increases oil density, acidity, viscosity and sulfur content. Because optimal conditions for microbial degradation occur in reservoirs at temperatures lower than 80°C [180°F], the process is restricted to depths of around 1.5 to 2 km [1 to 1.25 mi] or less. Other processes, such as preferential migration of lighter hydrocarbons, water washing or evaporation, can also degrade the oil.

Heavy oil has been found in geologically young Pleistocene, Pliocene and Miocene formations and in older Cretaceous, Mississippian and Devonian formations. More than 35% of the world's heavy oil resources are located in Venezuela and Canada, followed by the Middle East, US and Russia. Together, heavy oil, extraheavy oil, oil sands and bitumen account for about 70% of the world's total oil resources; heavy oil alone accounts for 15% (Figure 3). Heavy oil reservoirs differ from one another, and the methods of recovery may vary considerably from one reservoir to another. 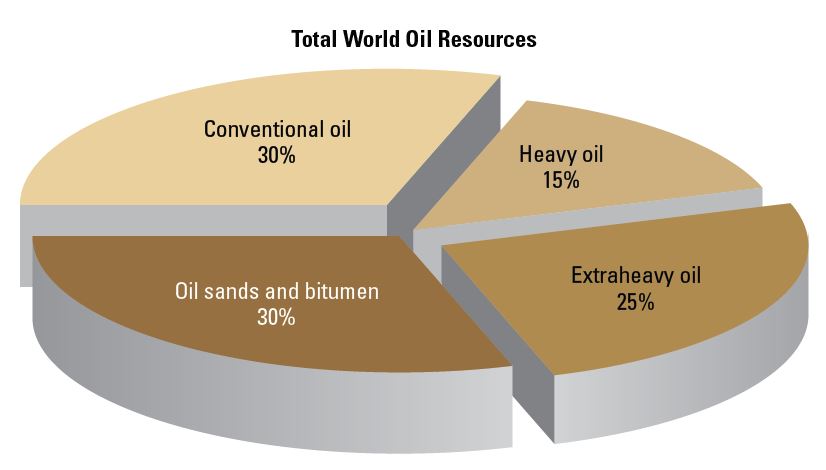 The high viscosity and density of heavy oil renders conventional production methods inefficient or even impossible. Because the viscosity of heavy oil is highly temperature dependent, the production of heavy oil is divided into hot and cold methods. When heated, heavy oil becomes less viscous and can be flowed from a well. Cold production, in which heating is not necessary, is only applicable when heavy oil viscosity at reservoir conditions is low enough for oil to flow on its own at economically viable rates.

Mining is one of several heavy oil recovery methods. In this open-pit method, the operator excavates thick, near-surface oil sand deposits and transports them to a processing facility, where oil and sand are separated by a hot water process. Most heavy oil mining occurs in Canada, where surface access, volumes produced and market prices favor the economic viability of this method. This method has a high recovery rate, but its associated carbon dioxide emission and environmental damage rates have stirred concern from both the public and the scientific community.

Cold heavy oil production with sand (CHOPS) is a method applied to primary production; Canada is the only country that uses CHOPS widely. Used in unconsolidated sandstone reservoirs containing viscous heavy oil, CHOPS is inexpensive to implement but recovers only 5% to 10% of the reserves in place. When CHOPS is used, production has an initial sand influx of 10% to 40% of the volume of produced liquids and solids. The sand cut decreases with time to a constant 0.5% to 10%, depending on oil viscosity. Sand movement, aided by gas exsolution from the depressurized oil, increases fluid mobility and forms channels or wormholes, in the formation which increases the size of the high permeability zone around the well.

Gas production from CHOPS is substantial because of trapped gas in the viscous heavy oil; the gas/oil ratio generally stays constant over several years. Oil production reaches its maximum rate within months of first production and then declines as reservoir depletion effects become dominant. The CHOPS method typically requires an artificial lift system to bring the oil and sand to the surface, where the two are separated by gravity. The sand contaminated with hydrocarbons must be disposed of, which is considered a drawback of the method; much of the contaminated sand is stored in underground salt caverns.

Cyclic steam stimulation (CSS) and steam flooding are the most common thermal heavy oil recovery processes. Cyclic steam stimulation is a single-well method that is applied in stages. This steam soak method is initiated by injecting steam into a well. During the steam soaking, the oil is heated to reduce its viscosity and enable production. The oil and water are brought to the surface and separated, and the process is repeated. Steam flooding is a multiwell method, in which steam is injected continuously into one or more wells and oil is driven to production wells. For steam flooding, wells are usually placed in regular patterns. The CSS and steam flooding methods are used worldwide and yield high initial production rates and recovery factors that can reach around 30%.

In recent years, operators in Canada have tested the vapor extraction (VAPEX) method. The method is efficient because it can significantly decrease oil viscosity through solvent dissolution. Solvent vapor, which is injected into the reservoir, expands and dilutes the heavy oil by contact. The VAPEX method employs a pair of vertically stacked, parallel horizontal injection-production wells, and the process uses a combination of vaporized solvent— propane or butane or a mixture— and a commercially available noncondensable gas such as methane. Engineers inject the gaseous solvent mixture into the upper well, enabling the creation of a vapor chamber around the wellbore from which diluted heavy oil drains by gravity to the lower well. Vapor extraction represents an energy efficient alternative for heavy oil recovery in fields and reservoirs for which thermal methods may be unsuited or not economic.

Thermal recovery methods heat the reservoir and provide generally higher recovery factors than do cold methods but at a higher cost. The steam-assisted gravity drainage (SAGD) method is used mainly in reservoirs containing extraheavy oil and bitumen. As in the VAPEX method, the SAGD process uses pairs of parallel horizontal wellbores drilled in the same vertical plane. Steam is injected into the upper wellbore and forced out into the surrounding formation to form a steam-affected volume called a steam chamber. The steam expands upward and laterally, heating the oil in situ to lower its viscosity, especially at the steam-oil front. The oil can be heated to above 200°C [400°F], reducing the viscosity to around 0.01 Pa.s, which enables fluid mobilization. Gravity causes the mobilized oil and condensed steam mixture to flow down to the lower wellbore, from which it is pumped to the surface. Initial communication between the upper and lower well is established by steam circulation in both wells. The SAGD method is used in many fields in Canada because much of Western Canada's heavy oil is too deep to mine; the estimated recovery factor for this method is 50% to 70%. It is, however, a capital-intensive production method; steam generation is costly and makes up the majority of the operating expenses. In some cases, formation layering can include horizontal barriers that impede steam from contacting the oil within the steam chamber, thereby reducing recovery.

Fireflooding, or in situ combustion, is the movement of a burning front inside the reservoir; this method, which has been used for more than 90 years, mobilizes high viscosity oils from heat provided by combustion. Toe-to-heel air injection (THAI) is an in situ gravity-controlled combustion process that uses air injection to fuel combustion to crack, upgrade and mobilize heavy oil.

Heavy oil reservoirs constitute a large percentage of the world's oil reserves, and the recovery of these reserves may be crucial in satisfying the steadily increasing global appetite for energy. Looking ahead, the focus lies on optimizing available recovery techniques such as SAGD and THAI while also broadening the search for alternative methods. The reserves are there; now the industry must learn to exploit them economically and safely.

Oilfield Review 2016.
Copyright © 2016 Schlumberger.
For help in preparation of this article, thanks to David Hin-Sum Law, Edmonton, Alberta, Canada