Interventions are an economic choice

Few oil and gas wells perform efficiently and produce uninterrupted from initial production to abandonment. Moving parts and seals wear out, tubulars develop leaks, sensors fail and formation pressures decline. To address these and other problems, operators rely on well intervention specialists. Interventions fall into two general categories: light or heavy. During light interventions, technicians lower tools or sensors into a live well while pressure is contained at the surface. In heavy interventions, the rig crew may need to remove the entire completion string from the well to make major changes to the well configuration, which requires killing the well by stopping production at the formation.

Well service personnel typically perform light interventions using slickline, wireline or coiled tubing. These systems may allow operators to clear the well of sand, paraffin, hydrates or other substances that may form blockages and reduce or completely halt production. Operators also use light interventions to change or adjust downhole equipment such as valves or pumps and to gather downhole pressure, temperature and flow data. In many cases, because light interventions are relatively inexpensive and require minimal equipment, they are included in routine well maintenance programs.

A slickline is a single strand of thin wire that conveys tools and sensors into and out of the well (Figure 1). Slickline-based interventions include removing sand and paraffin, running or retrieving subsurface control valves and running sensors into a well to record bottomhole temperatures and pressures. Slickline is reeled on and off a hydraulically driven drum. A heavier cable may be deployed drum when the tensile strength required to complete an operation exceeds the rating of the slickline cable. 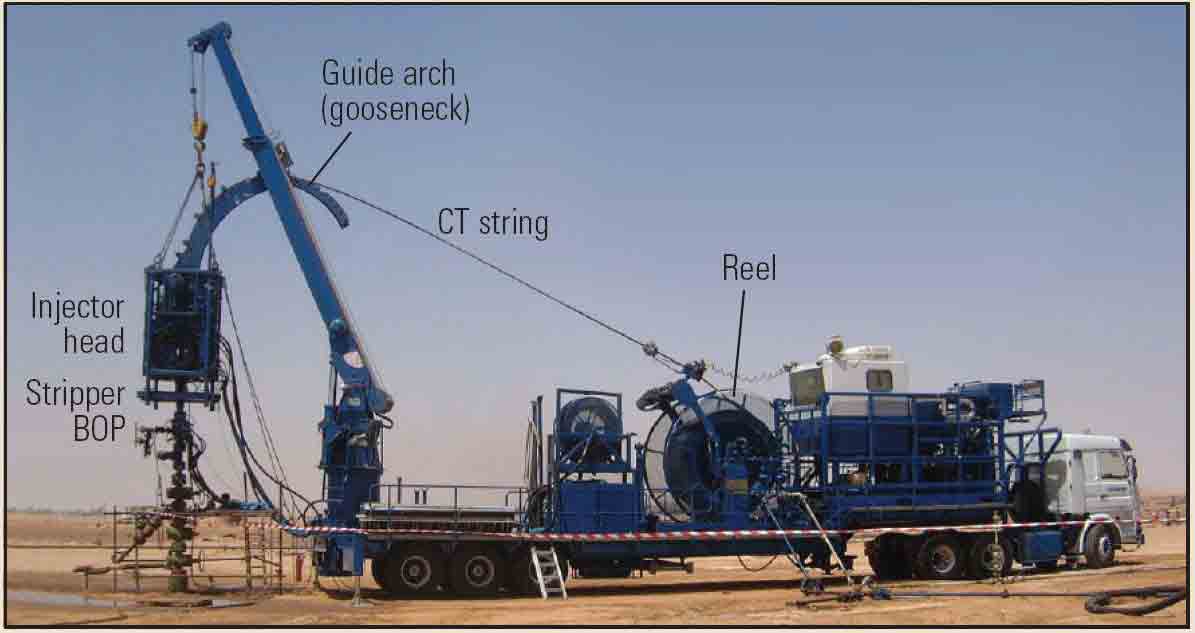 Figure 1. Coiled tubing unit. Coiled tubing (CT) is flexible pipe that may be spooled on and off a large reel using an injector head. The hydraulically driven injector head uses a series of slips to grip and pull the tubing off the reel or from the well and through an arched guide called a gooseneck. The gooseneck bends the tubing toward the wellhead or for spooling back onto the reel. The coiled tubing enters and exits the wellbore through a stripper blowout preventer (BOP), which contains components that seal against the tubing to contain well pressure. A second set of sealing rams (not shown) in the BOP may be closed against the coiled tubing to provide a pressure barrier alternative in the event the stripper BOP fails.

Coiled tubing also conveys tools downhole, but its primary use is as a conduit for fluid (Figure 2). Engineers use coiled tubing to wash out production-inhibiting sand or scale that has built up inside production tubing or to place acid or other treatments at precise locations within the well. Because coiled tubing has some rigidity, it may be more effective at pushing slickline or wire-line tools, which typically depend on gravity or tractors to move downhole in high-angle wells. When real-time data are desired, a wire may be inserted in the coiled tubing and connected to a sensor being conveyed downhole.

Figure 2. Basic slickline or wireline rig-up. A wire or cable runs from the drum to the lower sheave, which redirects it upward toward a second sheave. The sheave at the top of the pressure-control equipment turns the wire 180° and feeds it into the well. The wireline valve above the Christmas tree contains opposing rams (not shown) that may be closed to seal against each other without having to remove the wire, thus providing a pressure barrier alternative in the event the pressure-control equipment higher in the system fails. 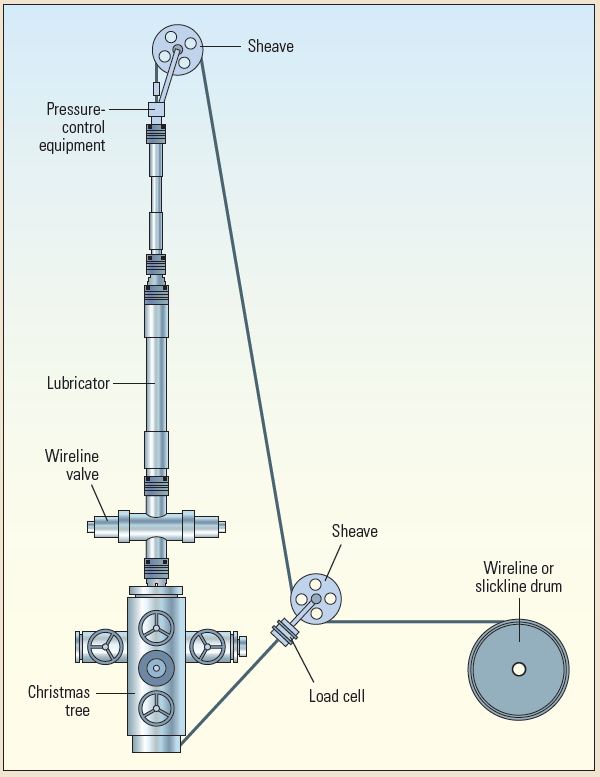 Heavy interventions require a rig to remove and reinstall the completion hardware. In many cases, the operator's objective is to replace leaking or worn-out parts. Typically, this requires replacing only the failed parts and running the completion equipment back into the hole. In some cases, however, operators perform workovers to adapt the completion to reservoir conditions that have changed as a result of production. These changes may include the onset of water and sand production or formation pressure that has fallen too low to push fluids to the surface. Assuming the formation has reserves with economic potential, an operator may make adjustments that shut off water production, deploy sand control equipment or run artificial lift systems into the well.

Operators may perform a special type of workover option—a recompletion—to abandon one zone and open and complete another zone that was tested and left behind pipe when the well was drilled. In some cases, slickline may be used to shut off the first zone by running in the hole with a special tool to close a sliding sleeve that had been placed across the perforations as part of the original completion. Slickline is then used to open a sleeve to allow production from a secondary zone.

Typically, however, because of initial well conditions, sleeves are not a viable completion option and operators must first abandon the primary producing zone by placing a cement plug across it. They then install new completion equipment with which to produce from the secondary zone. 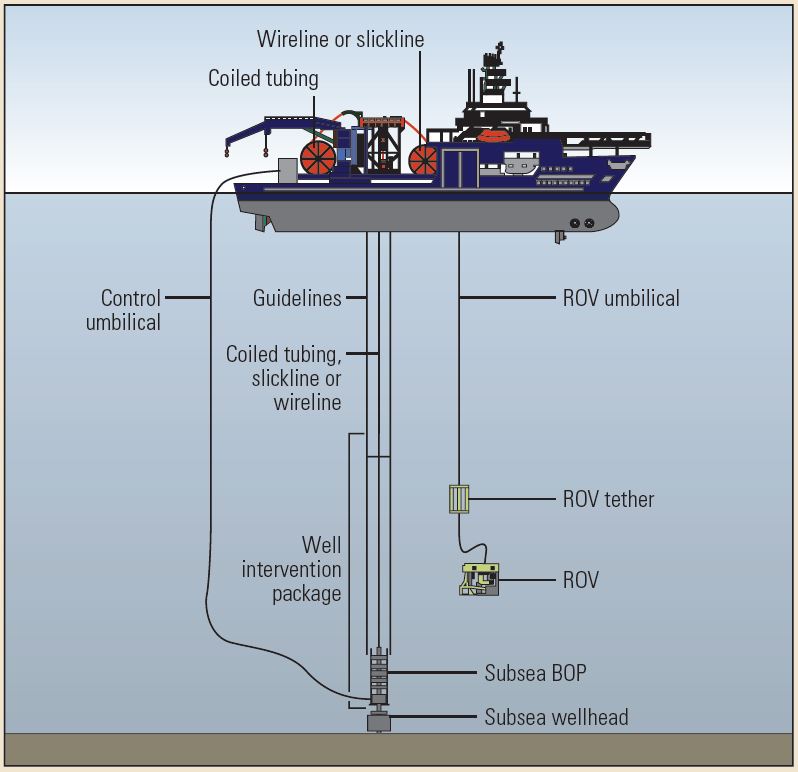 Subsea interventions may also be performed through a riser, or casing string, that connects the subsea wellhead to a surface system. Because risers must be deployed from offshore drilling rigs, this method is more expensive than riserless methods. However, the riser effectively extends the wellbore to the surface, which permits engineers to use all light and heavy intervention options available.

Interventions are an economic choice; operators must balance the cost of the operation against the value of potential additional production. Decisions to intervene may be made as early as the planning stage when, for instance, operators include sliding sleeves in the completion. Or engineers may conclude that potential secondary zone production justifies installing an intel-ligent well completion equipped with permanent sensors and remotely actuated sliding sleeves that require little or no intervention to reach known reserves behind pipe.

Operators' decisions are also influenced by new or enhanced interven-tion methods. For example, engineers have developed a slickline that enables digital two-way communication and may be deployed using a standard slickline unit. This digital slickline confirms tool depth and operations as they are performed and allows operators to conduct numerous operations that were at one time available using only heavier and larger wireline units.

The greatest intervention challenges and opportunities are offshore. Recovery from subsea wells is as low as 20% compared with about 50% to 60% from land-based and platform wells. The difference lies in the economic decision-making process. Because subsea well interventions in water depths greater than 400 m must be performed from expensive offshore rigs, expected production gains often do not justify the cost of an intervention. By increasing depth capability of much less expensive light interventions, experts believe they can increase deepwater ultimate recovery in some fields by 15% to 30%.