Geologists and engineers cannot examine the rock formations in situ, so sonde go there for them

Oil and gas reservoirs lie deep beneath the Earth's surface. Geologists and engineers cannot examine the rock formations in situ, so tools called sondes go there for them. Specialists lower these tools into a wellbore and obtain measurements of subsurface properties. The data are displayed as a series of measurements covering a depth range in a display called a well log. Often, several tools are run simultaneously as a logging string, and the combination of results is more informative than each individual measurement (Figure 1).

Figure 1. Assembling a logging tool on a rig floor. One logging operator holds a logging tool in place (left) while another assembles a connection (right). The upper part of the tool is suspended from the rig derrick (not shown, above the people). The operators will connect that to the lower section of the tool, seen protruding above the rig floor between the people. That part of the tool is suspended in the wellbore, held in place at the rig floor by the flat metal C-clamp. Most logging tools have a small diameter but can be the height of an average one-story building. The combination of several sondes in one toolstring can be many stories tall. 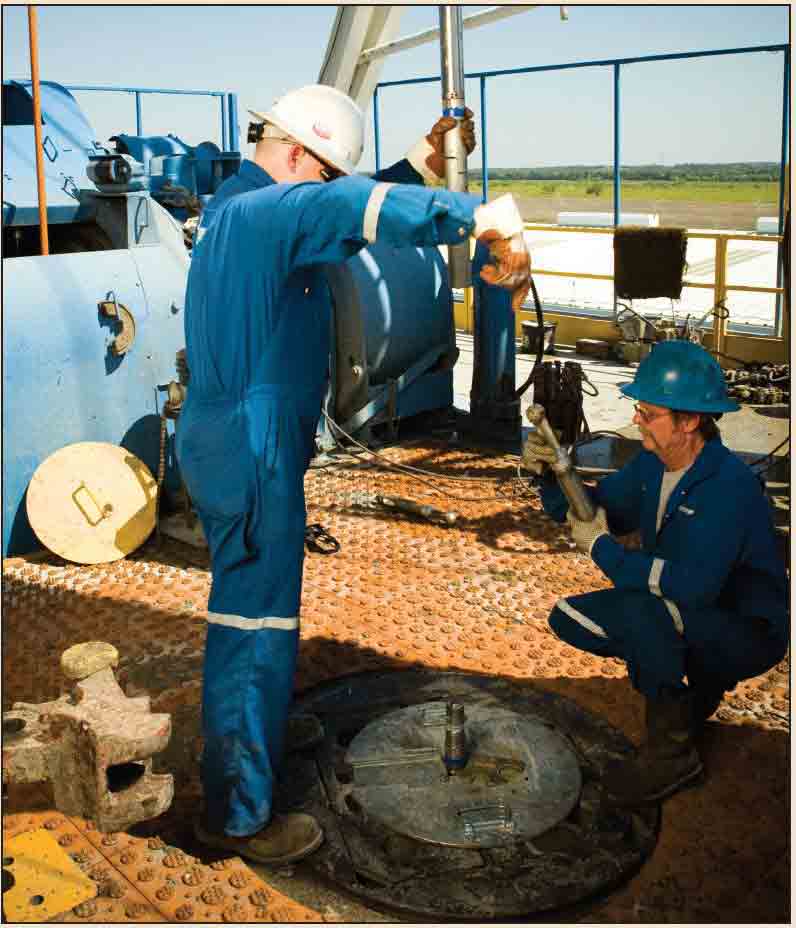 The Dawn of an Era

The first well log was obtained in 1927 in Pechelbronn field in Alsace, France. The tool, invented by Conrad and Marcel Schlumberger, measured electrical resistance of the earth. Engineers recorded a data point each meter as they retrieved the sonde, suspended from a cable, from the borehole. Their data log of resistivity changes identified the location of oil.

Today, geologists depend on sets of well logs to map properties of subsurface formations (Figure 2). By comparing logs from many wells in a field, geologists and engineers can develop effective and efficient hydrocarbon production plans.

Figure 2. Basic log. A common combination of logging measurements includes gamma ray, resistivity, and neutron and density porosity combined on one toolstring. The gamma ray response (Track 1) distinguishes the low gamma ray value of sand from the high value of shale. The next column, called the depth track, indicates the location of the sonde in feet (or meters) below a surface marker. Within the sand formation, the resistivity (Track 2) is high where hydrocarbons are present and low where brines are present. Both neutron porosity and bulk density (Track 3) provide measures of porosity, when properly scaled. Within a hydrocarbon zone, a wide separation of the two curves in the way shown here indicates the presence of gas. 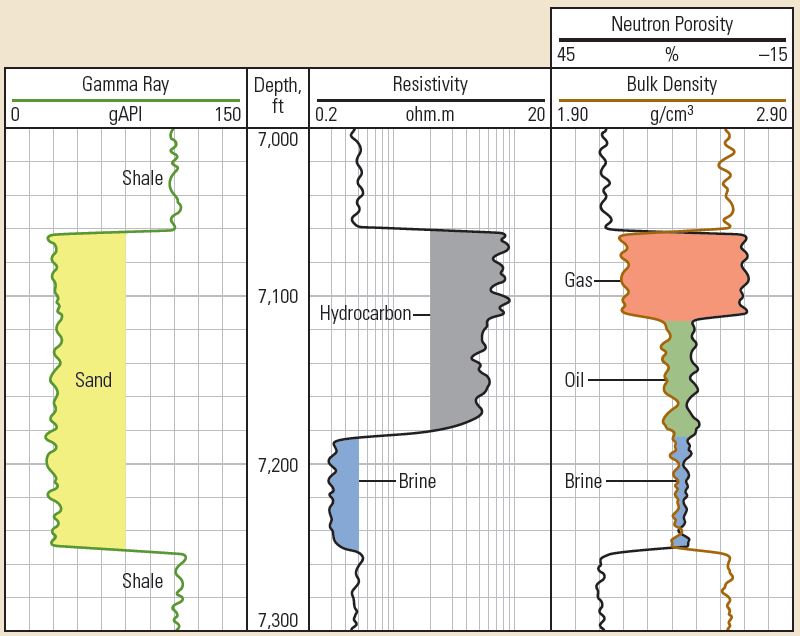 Immediately after a well is drilled, the formations are exposed to the well-bore. This is an opportune time to determine the properties of the rocks using openhole logging tools. In some cases, particularly in wells with complex trajectories, companies include logging tools as part of the drilling tool assembly. This approach is referred to as logging while drilling, or LWD.

Drillers typically stabilize formations by cementing metal casing in the well. The metal of the casing interferes with many logging measurements, but over the past 30 years the industry has dramatically improved its ability to measure formation properties and even locate bypassed oil behind casing using cased hole logs. In addition, many cased hole tools measure fluid flow rates and other production parameters in the wellbore or examine the integrity of the metal casing and its cement.

The first objective of logging in an exploration area is to locate hydrocarbons in a well. Next, the operating company wants to determine if enough resource is present to economically justify completing and producing the well. Logging indicates the basic parameters of porosity (fluid-filled portion of the rock); the water, oil and gas saturations and the vertical extent of a productive hydrocarbon zone, or net pay (Figure 3). Logging tools are calibrated to properly determine these and other quantities from the reservoir so companies can calculate accurate reserve values. Most logging tools designed for formation evaluation are based on electric, nuclear or acoustic measurements.

Oil and gas are more resistive than the salty water that fills most deeply buried rocks. Engineers created two types of electric sondes; both of them measure that difference. One type, a laterolog, measures formation resistivity by creating an electric circuit. Current flows from a tool electrode through the formation and back to another electrode. The other design uses induction coils to measure conductivity, the inverse of resistivity. This has similar physics to an electric transformer: A tool coil induces a current loop in the formation that is measured by a pickup coil on the tool. An extensive zone filled with hydrocarbon is apparent on an electric log typically as more resistive than an adjacent water-filled zone.

Quartz and carbonates, which compose the most common hydrocarbon reservoirs, have little or no intrinsic radioactivity. Shales, which often act as seals above reservoirs, include several naturally occurring radioactive components. Most logging strings include a gamma ray sonde to detect this radiation and discriminate geologic layers. A characteristic pattern on the gamma ray log often repeats in logs for wells throughout a given area. Geologists correlate these patterns from well to well to map geologic layers across the field.

Some logging tools use chemical sources that generate radioactive particles. The particles interact with the surrounding formation, and detectors on the sonde pick up the resulting signals. Gamma radiation is absorbed proportionally to the density of the formation. Other radioactive particles—neutrons—are absorbed proportionally to the amount of hydrogen. Measurements from both of these types of logs can be converted to porosity values. Each has a variability based on the rock type, and the average of the two, a density-neutron log, can be a good measure of porosity. In the presence of gas, the two detection methods separate in a distinctive manner that is recognized as a gas indicator. Some contemporary tools use a pulsed neutron generator, which can generate neutrons only while power is applied.

The chemical makeup of minerals in a formation can be determined with a neutron source that uses elemental capture spectrometry. This information helps geologists determine the rock composition.

The speed at which sound travels through rock depends on its mineral com-position and porosity. An acoustic or sonic logging tool transmits a sound pulse into the formation and a receiver on another part of the tool detects the transmitted pulse. The travel distance of the pulse is known, so its travel time provides a sound velocity that is proportional to a porosity measurement.

A Multitude of Measurements

Geoscientists and engineers have access to a wide variety of logging tools that provide much more than the basic information described above. Nuclear magnetic resonance tools obtain information about pore sizes and fluids in situ. Imaging logs can provide a high-resolution and 360° view of various formation properties at the wellbore wall. Other tools can bring rock or fluid samples to surface or measure properties of fluids as they flow into the wellbore. And at a larger scale, measurements made with a source in one well and a receiver in another indicate formation and fluid properties between them.

Well logging requires robust technology because of harsh well conditions and cutting-edge technology because of complex reservoir properties. Scientists use sophisticated methods to design new tools and evaluate the data they collect. Most hydrocarbon discoveries today are in remote areas and often are difficult to produce. These resources—and the people to find, evaluate and produce them—are vital to fulfill the growing energy needs of the world.