The volume of oil and gas produced from a reservoir ultimately determines the economic viability of the asset. Reserves calculations—a primary responsibility of reservoir engineers—predict the total hydrocarbons available for extraction. After reservoir engineers calculate hydrocarbons in place, they apply recovery factors to determine the ultimate recovery potential. These calculations are performed throughout the life of a field to help engineers create field development plans, well proposals, recovery procedures and reservoir management programs. When a field is appraised, the reservoir engineer is part of a team that evaluates geologic, geophysical, geomechanical, drilling, completion and well data, which are integrated into a plan to produce the reserves profitably. Typical reservoir engineering activities include material balance calculations of flows in to and out of the reservoir, pressure transient analyses, production decline curve analyses to forecast future production based on past production and reservoir simulations.

The engineers devise plans to optimize the number and placement of wells required to deplete the reservoir and suggest placement of producers or injectors. They update the plans over time. These matters are relevant to engineers establishing well patterns to optimize primary recovery, waterflooding and enhanced oil recovery. In addition, reservoir engineers model fluid dynamics in the surface piping networks that transport produced hydrocarbons from the wellbore to production facilities.

Reservoir engineers study fluid movements and drainage patterns using numerical reservoir models and simulations to evaluate changes in a reservoir during production. Because the engineers cannot actually see into the reservoir, they rely on production data and other indicators to ascertain fluid behavior beneath the Earth's surface (Figure 1).

Figure 1. Production simulation. A reservoir engineer takes static and dynamic data (left) and develops input for a reservoir simulator (middle left). The reservoir simulator, whose primary task is to analyze flow through porous media, calculates production profiles as a function of time for the wells in the reservoir. These data are passed to a production engineer to develop well models and a surface network simulator (middle). A facilities engineer uses the production and composition data to build a process plant model with the help of a process simulator (middle right). Finally, data from all the simulators are passed to an economic simulator (right) to help the operator decide on the next course of action based on the risks and profitability of the project.

Engineers describe the fluid behavior using numerical equations, which define initial and boundary conditions for the reservoir and obey the fundamental principles of conservation of mass, fluid dynamics and thermodynamic equilibrium between phases. Reservoir simulations reproduce historical reservoir pressures and production rates, in a process known as history matching, to calibrate the models. Next, engineers use the simulations to forecast how the pressures and rates will evolve, test the outcomes for various production scenarios and quantify the uncertainties associated with predicted outcomes.

Reservoir models are only as good as the rock and fluid data that go into them. Reservoir engineers rely on formation evaluation, analyses of well measurements, to determine the properties of reservoir rock and fluids. The data may originate from core and fluid samples, from wireline and logging-while-drilling logs and from pressure- and rate-transient tests—measurements of pressure and flow rate as a function of time after intentionally changing the flow rate.

The physical characteristics of the solid frame and pore space of rock affect the volume and transport of reservoir fluids. Important properties include: porosity, the fraction of the total rock volume that is pore space; saturation, the fraction of pore volume that contains a certain fluid; permeability, a rock's ability to allow fluids to pass through it; and compressibility, the deformability of the rock's total volume and pore volume. In addition, many reservoirs contain natural fractures, which affect fluid movement through the rock. Rock properties vary by lithology and with reservoir location and flow direction; these variations are a result of geologic history.

Reservoir fluids include hydrocarbons and nonhydrocarbons and initially may be found as gases or liquids, but as downhole conditions change, the fluids may also change over time. Fluids may include injected fluids, for example, water from waterfloods and chemicals, polymers, steam and carbon dioxide [CO2] from enhanced oil recovery operations.

Just as the types of fluids in the reservoir can change over time, fluids may go through phase and compositional changes as they travel from the reservoir at subsurface temperatures and pressures to the surface. Conditions continue to change as the fluids flow from the wellheads through flowlines for transport to refining facilities (Figure 2). 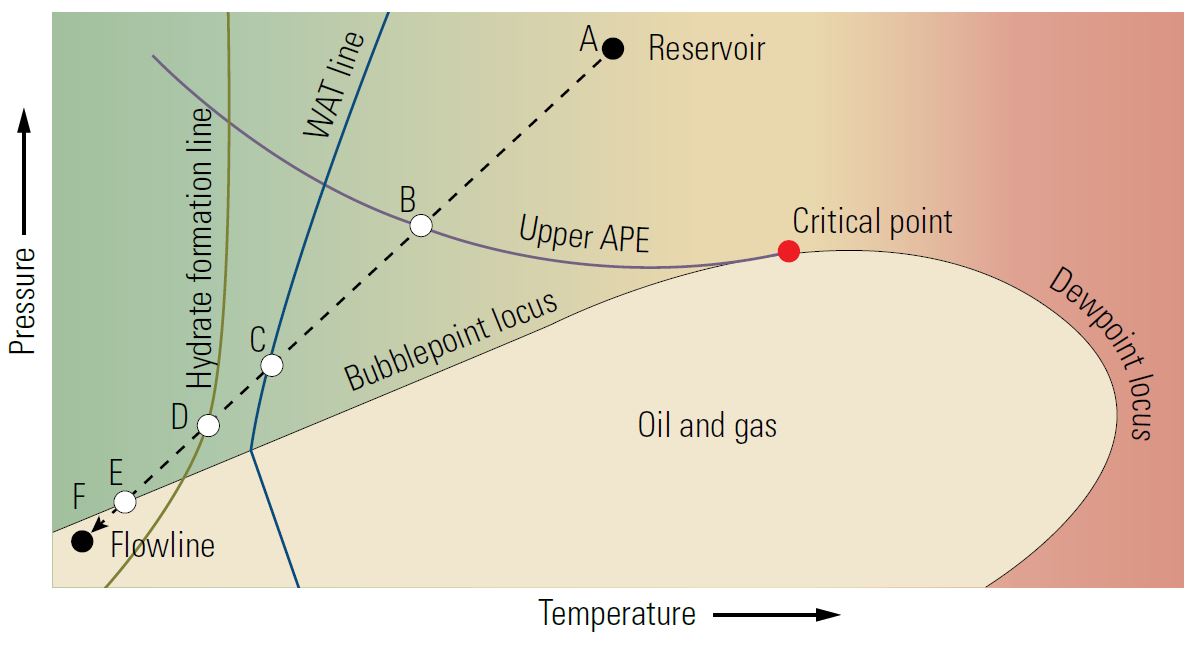 Figure 2. Generalized pressure-temperature (PT) diagram. The diagram contains a single-phase and a two-phase region. The single-phase region contains grades of hydrocarbon, including oil with dissolved gas (green), gas condensate, or vaporized oil in gas (yellow), and gas (pink). The two-phase region (beige) contains oil and free gas; the oil fraction from the dewpoint locus toward the bubblepoint locus. The boundary between these regions is called the saturation envelope. The bubblepoint locus is the segment of the saturation envelope at which gas begins to separate from liquid. The dewpoint locus is the PT segment at which liquid begins to condense from gas. The critical point is where the phases meet. Depending on the design and operation of the production system, some or all of the phase boundaries may be crossed as oil is produced from a reservoir. The oil follows a path along a line of steadily decreasing temperature and pressure as it moves from the reservoir (A) to the flowline (F). Temperature and pressure drops cause asphaltene to separate from solution (B) when the oil crosses the upper edge of the asphaltene precipitation envelope (upper APE). Next, wax begins to form (C) as the oil crosses the wax appearance temperature (WAT) line. It enters the hydrate range (D) before crossing the bubblepoint locus (E). Beyond this locus, gas begins to separate from liquid to form a two-phase fluid before the fluid finally reaches the flowline (F).

A reservoir fluid system can be roughly categorized by its vapor-liquid phase behavior, ranging from dry gas, wet gas and retrograde gas to volatile oil, black oil or heavy oil. The pressure, volume and temperature (PVT) behaviors of the fluids are important input parameters to reservoir simulators that engineers use for predicting phase and compositional changes as fluids flow from the reservoir to the refinery.

Fluid properties determine how reservoir fluids interact with each other and with the rock. Basic fluid properties include: density, fluid mass per unit volume; viscosity, a fluid's resistance to flow; and compressibility, the fluid volume change in response to pressure variation. Typically, oils at reservoir conditions contain gas in solution. Consequently, important oil properties include the oil formation volume factor, the volume ratio for oil at the surface over its volume at reservoir conditions, and the solution gas oil ratio, the ratio of the volume of gas dissolved per unit volume of oil, especially at the oil's bubblepoint pressure—the pressure below which the dissolved gas begins to come out of solution.

Reservoir fluids often flow from the subsurface as mixtures of oil, gas and water. Important multiphase transport properties include: relative permeability, the relative ease for one fluid to flow through the pore space in the presence of other fluids; wettability, the preference for a solid to be wetted by, or in contact with, one fluid rather than another; and capillary pressure, the buoyancy difference between the nonwetting and wetting phases competing for pore-space access. These properties affect the fluids' relative distribution, or saturation, in a rock's pore volume and their transport through it.

Field data for predicting and evaluating fluid flow in reservoirs come from transient tests and production logging conducted in wells. These data complement production data—the record of fluids produced from and injected into the reservoir—and help to explain patterns of pressure, flow rate and production volume variation across a field. In addition, the data are used to calibrate reservoir simulation models.

Reservoir engineers use data from transient testing to analyze and interpret reservoir pressure and flow rate behavior by taking measurements while intentionally varying the flow rate. This flow can be obtained by a downhole logging tool at the scale of liters, or the flow can be determined at reservoir scale while the operator is temporarily producing a well. Pressure-transient tests are conducted after either periods of no flow to establish static pressure conditions or periods of flow to establish stable flow rate conditions. During the test, flow is either reestablished or stopped and the downhole pressure is monitored. The flow rate changes cause pressure transients, or disturbances, that propagate away from the well and into the formation. Eventually, these pressure disturbances dissipate, and the pressure achieves a steady value in a reservoir. Rate transient tests are conducted by monitoring long-term flow tests for variations in the flowing pressure and rate behavior that are indicative of various flow regimes as the transient migrates away from the well and deep into the formation. Engineers watch for characteristic behaviors such as radial flow from a well, linear flow from a hydraulic fracture and, during long-term tests, the effects of reservoir boundaries; these boundaries may be impermeable and not allow flow, may be at constant pressure or may be a fluid source or sink.

Reservoir engineering is important to all aspects of hydrocarbon production. It is central to engineers' ability to evaluate formation properties, forecasting production, improving efficiencies and cutting costs. Using improved forecasts from these tools, operators are better equipped to make field development decisions.