Today, geophysicists bounce seismic waves off strata below the Earth's surface and record seismic reflections to create high-resolution images of the subsurface.

In the early days of the oil and gas industry, exploration was generally conducted by trial and error. Knowledge of subsurface structures was limited to the well being drilled and nearby offset wells. Today, geophysicists bounce seismic waves off strata below the Earth's surface and record seismic reflections to create high-resolution images of the subsurface.

Seismic wave types include surface waves that travel along the surface of the Earth and body waves—compressional and shear waves—that travel through the Earth. Reflection seismic surveys typically use compressional waves, which are also known as P-waves. P-waves are the fastest waves and the first to arrive and be recorded by instruments. P-waves are also pressure waves; each P-wave cycle contains a compression and extension component. Sound waves are examples of P-waves.

At geologic interfaces, some seismic energy reflects, or echoes, back to the surface. At the surface, seismic receivers, which are electromechanical devices—microphones, geophones, hydrophones or accelerometers—detect the reflected energy and convert it into electrical signals. The signals are recorded and later processed into images of the underground geology, which may be interpreted for oil and gas exploration, development and production purposes. E&P geoscientists use these images to map and delineate exploration prospects, to plan placement of wells in reservoir zones and to monitor reservoir changes during hydrocarbon production.

When P-waves travel through geologic layers, only some of the wave energy reflects from lithologic interfaces; the remainder crosses the interfaces. Two physical relations govern the reflection and transmission of waves. Both relations are simplifications of the wave equation, which describes the behavior of sound, electromagnetic radiation and other wave phenomena. The first relation is Snell's law, which describes the directions that reflected and transmitted waves take from an interface.

Figure 1. Snell's law. At a geologic interface, the energy in an incident compressional wave (P-wave) will be partitioned into reflected and transmitted P-waves and vertically polarized shear waves (S-waves). Snell's law determines the angles of reflection and transmission. For material properties, Ï and V refer to bulk density and velocity, respectively. Subscripts P and S indicate P- and S-waves. Subscripts 1 and 2 indicate properties for Lithologies 1 and 2. 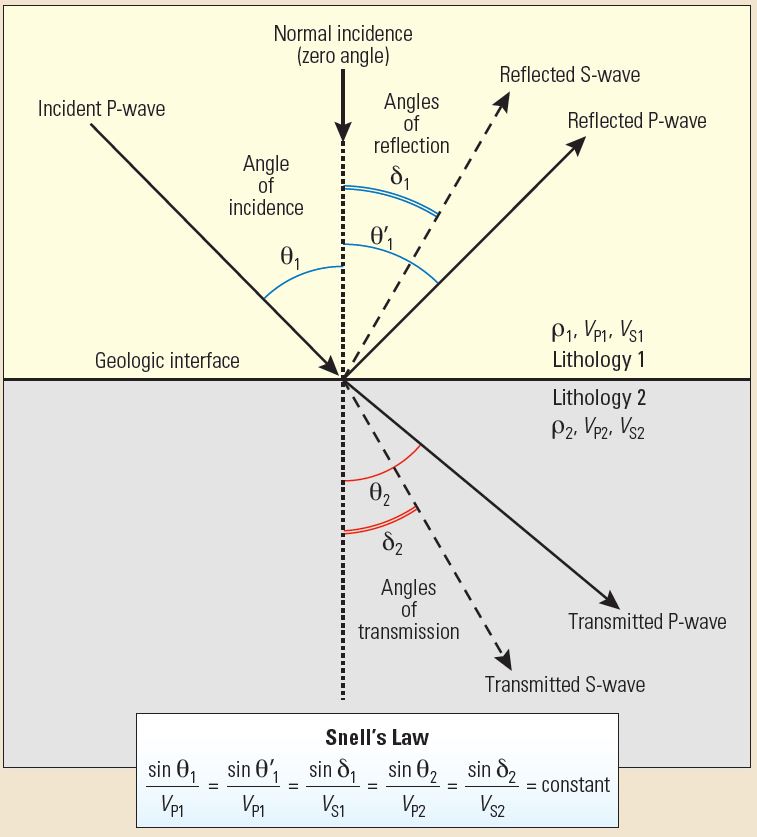 Reflection seismic data may be acquired on land or at sea. During land acquisition, seismic data are collected from a grid of seismic receivers deployed on the ground. The seismic source is moved and triggered in a pattern that interweaves with the grid of receivers.

For marine acquisition, sources and streamers, which are arrays of receivers attached to a cable, are deployed off the back of a slowly moving ship; seismic sources are usually in front of the streamers. As the ship moves, the sources fire at regular intervals, and the receivers record the signals. The ship typically traverses a grid pattern covering the survey area.

Both on land and at sea, each receiver records a trace, which represents the amplitude of seismic signal and noise received during the recording time. Because multiple recording devices are activated when the source is triggered, multiple traces are produced.

A seismic record is the collection of traces recorded from a single source point. A record is a section, or cube, of data with distance or geographic location along the horizontal axis, or axes, and recording time along the vertical axis. Each trace is plotted at its receiver location, and its positive and negative deviations from zero indicate amplitude variation. Usually, time, rather than depth, is plotted along the vertical axis. The recording time is two-way traveltime (TWT) because the signal must travel from the surface to the reflector and back up to the receiver on the surface.

The high-frequency content of seismic signals that travel through the Earth experiences natural attenuation. For imaging features in the deep subsurface, geophysicists want to record the lowest possible frequencies, which are the least attenuated and have deep penetration power. To attain accurate vertical resolution of underground features, the survey must also record the highest possible frequencies, which become progressively weaker with distance. Consequently, geophysicists design seismic sources, sensors and surveys to be able to generate and record broadband signals that contain the widest possible range of frequencies.

Figure 2. Common midpoint (CMP) stack. The common midpoint (CMP, top left) is the point on the surface halfway between sources (S) and receivers (R) that is shared by numerous (m) source-receiver pairs. For horizontal layers, the CMP is directly above the common reflection point (CRP). The distance X between source-receiver pairs is the offset. A CMP gather (top right) is a record of traces from the source-receiver pairs that share a CMP. It is a plot of two-way traveltime versus offset. As the offset between source-receiver pairs increases, the moveout, or difference in arrival times, of a reflected wave increases. Time T0 is the zero-offset time for a reflection arrival when source and receiver occupy the same point. The moveout correction (bottom left) removes the moveout to collapse all arrival times in the CMP gather from a reflector to T0. The CMP stack (bottom right) is the summation of all moveout-corrected traces in the CMP gather. Random noise in individual traces is attenuated during this process, leading to a clearer image. 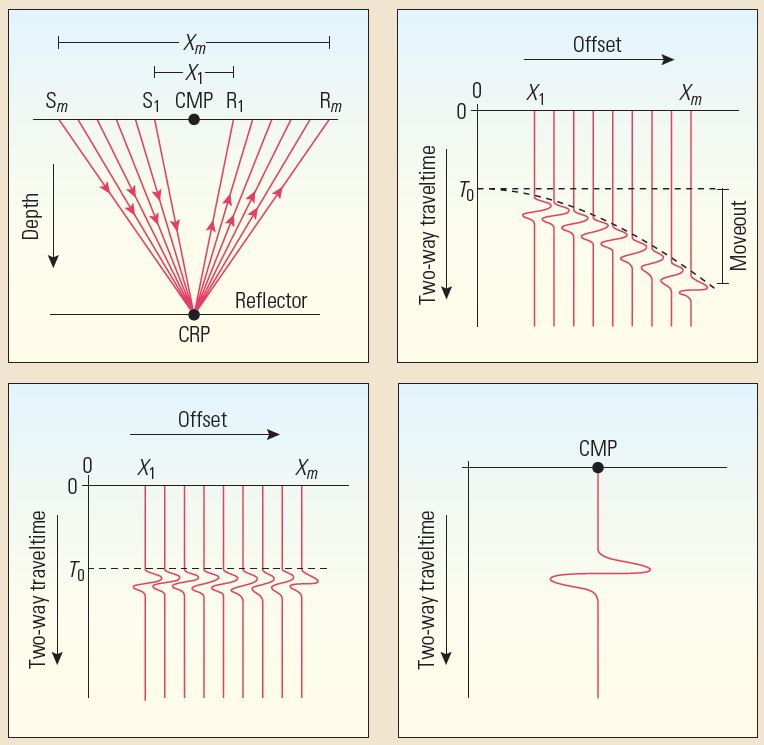 Geophysicists make moveout corrections to shift all traces so that reflections in a CMP gather appear horizontal at their zero-offset times. Then, in a process called stacking, they add together the traces in the CMP gather to form a single trace, which is called a CMP stack. Geophysicists repeat this process for every CMP gather in the survey. The end result is that many seismic records from a survey traverse are reduced to a single seismic line, or section, that contains traces from CMP stacks arranged in order of their geo-graphic position. When applied to reflections from horizontal strata, the moveout correction is called a normal moveout (NMO) correction.

The process of stacking the CMP also helps to remove random noise, or unwanted signal, that results from the environment. Such noise tends to be unsystematic and may be suppressed further by additional data processing.

Within seismic images, interpreted features do not always appear in their correct locations because seismic energy bends, scatters and changes direction in the subsurface. Migration is an advanced seismic processing technique that geometrically repositions image points to a more accurate location. After the migration operation, dipping features are moved, and scattered energy collapses back toward its point of origin. As a result, images are sharper and more accurately reveal the underlying geology.

Reflection seismology is a powerful tool for imaging strata within the subsurface (Figure 3). Geophysicists use acquisition techniques to acquire seismic data from many angles. They use migration and other advanced data processing algorithms to improve identification of reflection points and suppression of noise. Consequently, geophysicists are revealing details about subsurface geologic structures and strata and obtaining data for accurate interpretation of exploration prospects and delineation of drilling targets.

Figure 3. 3D reflection seismic survey result. This 3D seismic dataset from offshore Australia shows a complex system of marine channels and related sedimentary deposits flowing E-W toward deep water. The inline in the background and the crossline on the right side of the image cut across and show perpendicular sections through the channel system. The horizon is an interpreted surface considered to be the base of the depositional system. The colors indicate the spatially varying reflection strength, which may be caused by local changes in geology and saturation of the pore space and may be associated with faulting. (Dataset used with permission courtesy of Geoscience Australia.) 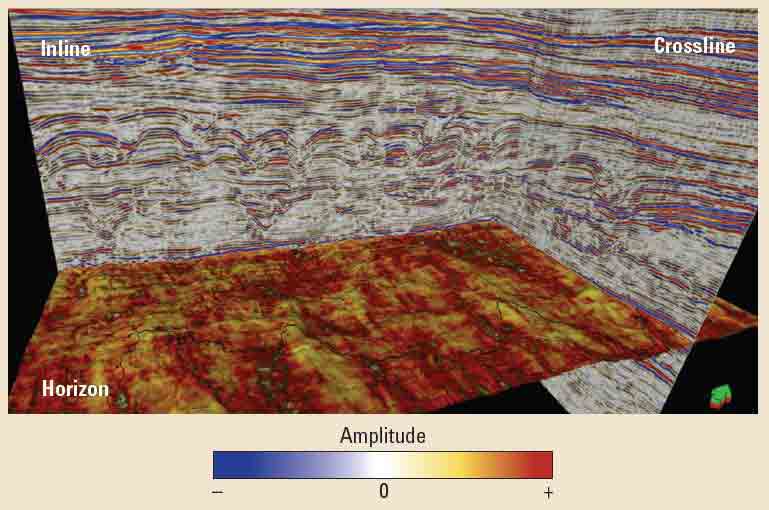 Oilfield Review Spring 2014: 26, no. 1.
Copyright © 2014 Schlumberger.
For help in preparation of this article, thanks to Victor Aarre, Stavanger, Norway; and Lisa Stewart, Houston.