During a recent project, a dry-gas drilling program in North Africa was plagued with persistent well integrity issues. After being drilled with a polymer-based mud, the wells’ 13 3/8- and 9 5/8-in casing sections were typically cemented with a dual-slurry system that tended to bond poorly, which was a precursor to SCP development that limited production from the newly drilled wells and precluded regulatory approval. Some wells experienced hole instability or lost circulation, but the problems were unpredictable. In addition, almost the entire intermediate section of these wells included small uneconomic volumes of gas that challenged zonal isolation.

Initial attempts to remedy the problem included changing weighting agents and adding microsilica. Engineers also proposed a dual-lead cement design with the first slurry overretarded. These options increased operational complexity without significantly improving bond logs. The operator also considered casing reciprocation and applying backpressure on the setting cement but dismissed both options because of the increased risk of lost circulation and limited rig capability. A specialty chemical wash was also proposed but declined because it did not meet strict North Sea regulations.

After a thorough review of well conditions, bond logs, and TOC issues, Schlumberger cementing experts discovered the existing spacer system was not optimal for the polymer-based drilling mud. The experts also determined that the cement design had not adequately addressed possible cement shrinkage and debonding in the downhole environment.

After laboratory testing with several hole-cleaning options, the experts recommended pumping CemPRIME Scrub spacer ahead of the cement based on its superior performance with the drilling mud.

Next, the experts adjusted the cementing plan to limit gas channeling by switching to FlexSTONE technology, which limits cement permeability and includes an optimized expanding agent to counteract cement shrinkage and reduce the risk of gas channeling while setting. The slurry density was also optimized at 1.6 g/cm3 [13.35 lbm/galUS].

To ensure slurry delivery as designed, the engineers also called for batch mixing rather than real-time mixing that was customary in the field. To further mitigate the risk of SCP, inflatable and swellable annular casing packers (ACPs) were used in addition to the flexible cement.

The first field application of the new spacer and cement designs resulted in excellent cement bonding; however, because of losses in a weak formation, the cement did not reach the TOC target.

In subsequent wells, the operator used a lost circulation treatment while drilling to avoid cement losses during placement. Consequentially, TOC was reached as designed in the second well, which also had excellent cement bond to the casing and well tests with zero annulus pressure. It was also verified that the set cement maintains integrity during anticipated load cases after cement placement. As a result, the operator was granted regulatory approval for the well.

Based on this success, the operator has incorporated the lessons learned and best practices into future operations for wells of similar design and conditions.

Conventional cementing designs resulted in poor bonding and sustained casing pressure, as demonstrated by a 200-m section of the well log (left). Cement bond logs improved across the same section in a newer well (right) after engineers redesigned the cementing program to use the CemPRIME Scrub spacer and FlexSTONE technology. 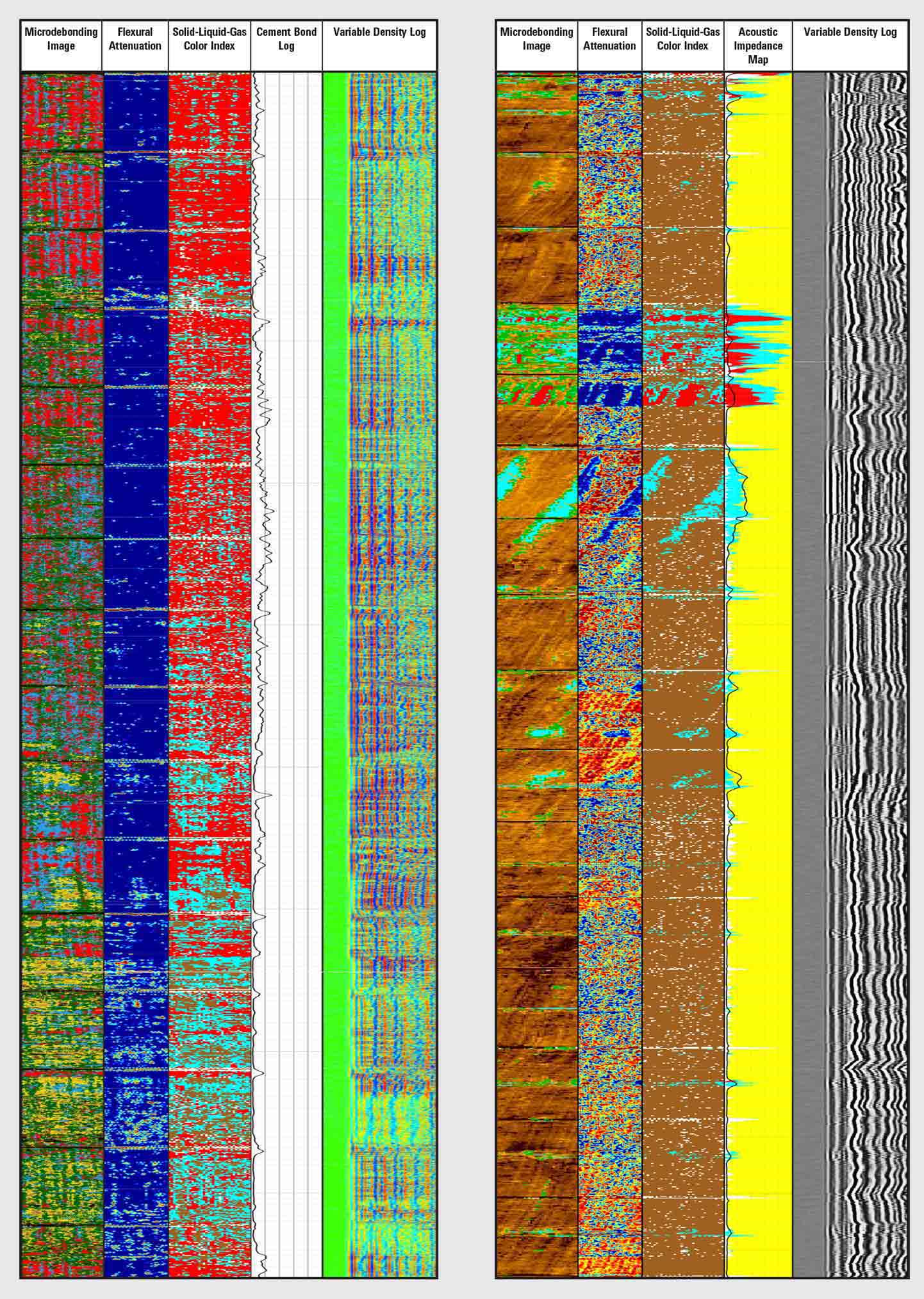 Suit a variety of downhole conditions with customized spacer chemistry.

Optimize zonal isolation for the life of the well.