Two wells being drilled as part of a cyclic steam injection project experienced total losses at 1,120 ft (341 m) during drilling of the 8 1/2-in reservoir section. Drilling continued to the target depth of 1,550 ft (472 m), with loss rates reaching 200 bbl/hr (32 m3/h). As this section was intended to be the production/injection zone, it was important that any lost circulation treatments neither inhibit future production nor damage the formation.

A decision was made to mitigate losses before running (and cementing) the 7-in casing. The objective was to avoid cementing fluids being lost to the reservoir and to bring cement to surface. In these shallow cyclic steam injection wells, zonal isolation is important to avoid steam leaking to surface when the wells are on injection and to ensure the reservoir's natural conductivity remains undamaged for subsequent production and injection.

As part of the Losseal reinforced composite mat pills family, the Losseal Reservoir Fracture treatment was selected for these challenging conditions. The fibers and solids were rapidly prepared on site within an hour. The treatment for each well was configured at 8.6-lbm/galUS [1.03-g/cm3] density. The pill volumes for Wells 1 and 2 were 50 bbl and 55 bbl [8 m3 and 8.7 m3], respectively. The treatment material was successfully mixed and pumped without issue.

The 50-bbl [8-m3] volume Losseal Reservoir Fracture treatment for the first well was executed as designed with the density mixed within the acceptable range of ±0.02 lbm/galUS [±0.0024 g/cm3] and volumes verified by the rigsite manager. When the Losseal Reservoir Fracture treatment pill entered the loss zone, a slight rise in the pump pressure indicated the rising column of fluids into the annulus and returns were established after displacing 7 bbl [1.1 m3]. After pulling out 200 ft [61 m] above the top of the pill, the hole was circulated with water and returns were observed after pumping 25 bbl [4 m3]. The drillpipe was run in hole to the top of the loss zone and circulation was established. Again, full returns were established after pumping 3.3 bbl [0.5 m3] of water.

The second well was also successfully treated with a single Losseal Reservoir Fracture treatment pill with similar results. After running back to bottom, the measured loss rates for Wells 1 and 2 were 30 bbl/h and 18 bbl/h [4.8 m3/h and 2.9 m3/h], respectively, reducing losses by more than 85% on average. Further treatments were deemed unnecessary, as the loss rates for Wells 1 and 2 were mitigated sufficiently to allow casing to be run and cemented.

Losseal Reservoir Fracture treatment material in varying stages of degradation. The fiber system is stable for a configurable period of time and then breaks down to allow for production, leaving the formation undamaged. 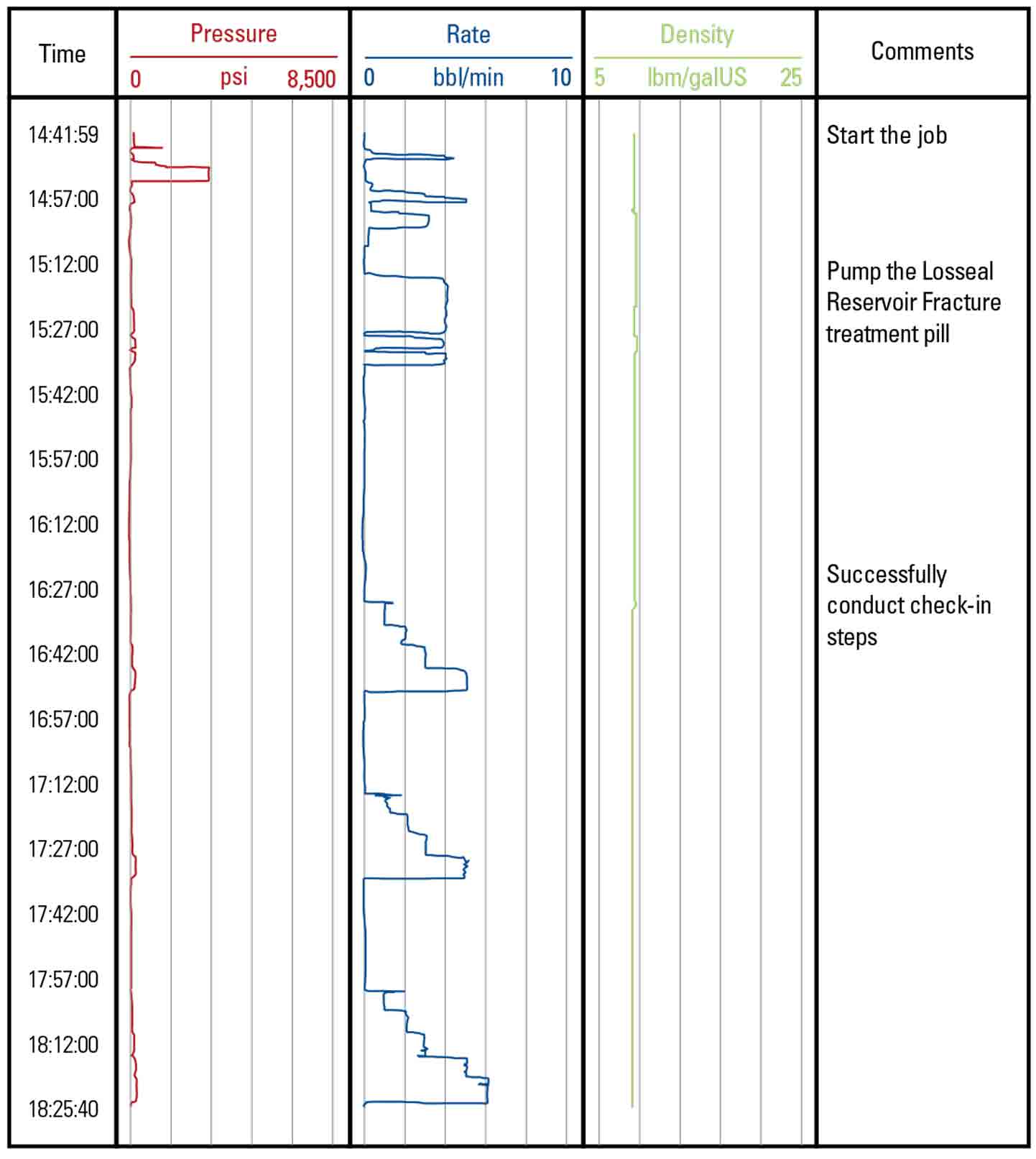 After several months, both wells began production from the treated reservoir zones with no remedial treatment previously applied. Well testing confirmed that both the treated wells' initial production rates were higher than predicted and higher than the production rates of any nearby offset wells. These results indicate the Losseal Reservoir Fracture treatment pills degraded with no damage to the producing formation.